I recently had a fairly long layover at LAX about a week and a half ago on my way to Hong Kong and had the chance to visit several airline lounges there and wanted to write a post to talk about my experiences and what I liked and disliked about each. 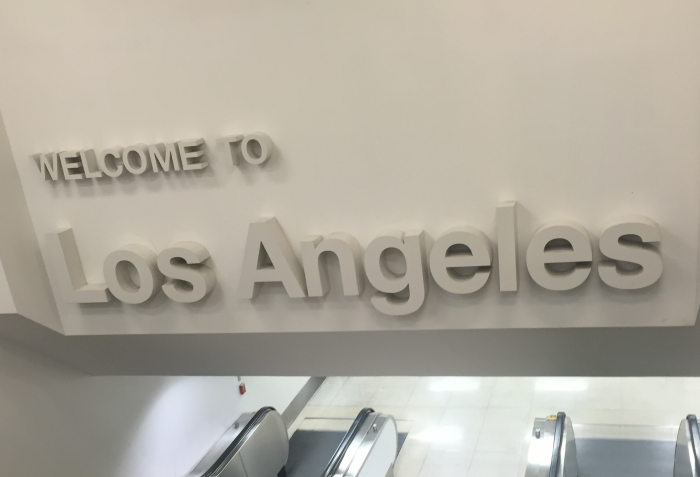 I flew on American Airlines for this trip, and being an Executive Platinum member of AA’s AAdvantage frequent flyer program (One World Emerald) and having a Priority Pass Select membership through my Citi Prestige credit card, I am able to access to quite a few lounges here.

I arrived at LAX around 10pm from and my flight to HKG wasn’t departing until 1:55am, so I had about 3 hours to “explore”. I landed in and was departing from Terminal 4, but it’s fairly easy to walk to the other terminals from there without leaving the secure area (with the exception of T1, T2, and T3 which are not connected).  You can see the layout on the map below from the LAX airport website: 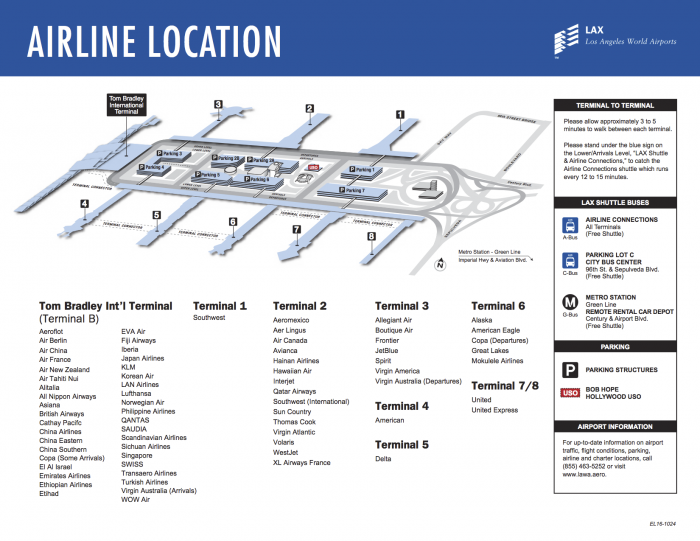 The remodel of Terminal 6 was just completed a week or so earlier, so I wanted to check that out.  I followed the signs down to the underground tunnel that connects T4 with T5 and T6).  It used to be a long white hospital-like corridor but the airport has since replaced the dreary white walls with some interesting tidbits and pictures of key moments in aviation history.  The walk from T4 to T6 was only about 10 minutes at a fairly quick pace. 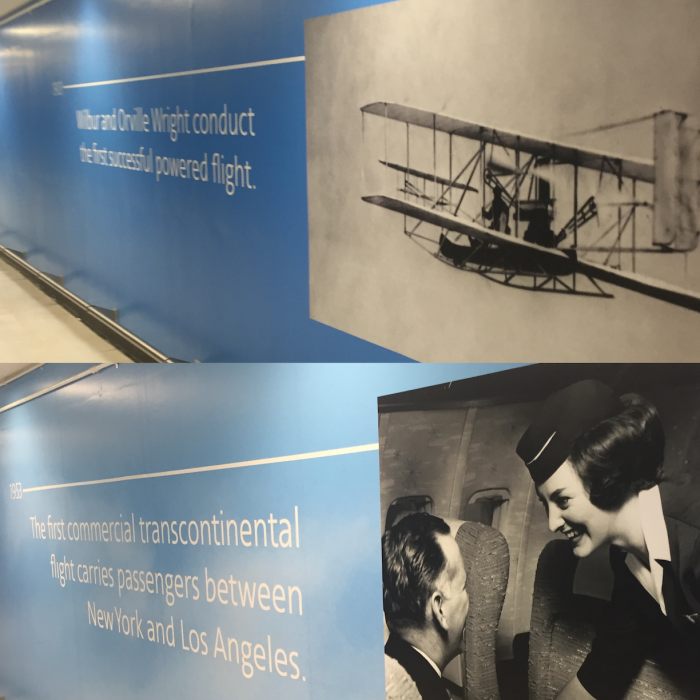 When I got to Terminal 6, I was impressed with the remodeling work that was done (reportedly under budget and ahead of schedule).  I had been in this terminal before when it was under construction, and it now looks totally different than before.  Modern looking restaurants and shops and even some nice high definition scenery to look at on the flight departure board. 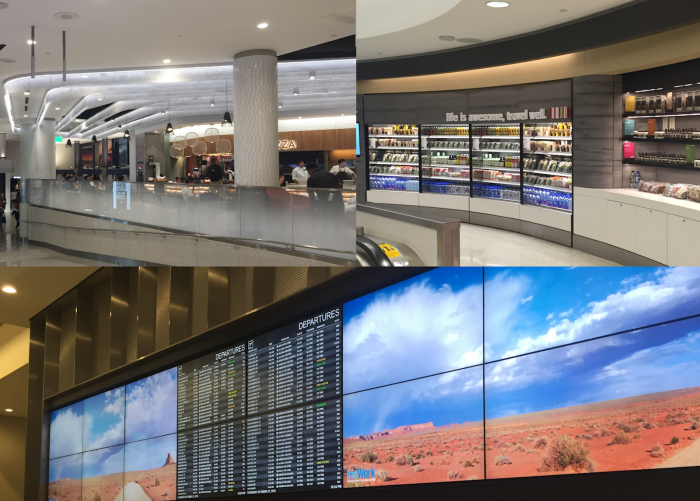 Terminal 6 is also the home of Alaska Airlines, and I decided to start my lounge tour here using my Priority Pass card.

The Alaska Board room is a relatively small lounge with a very “northern” look and feel to it.  From the woodsy furniture to Alaska’s very own branded pancake machine, it’s somewhat unique compared to other domestic airline lounges. 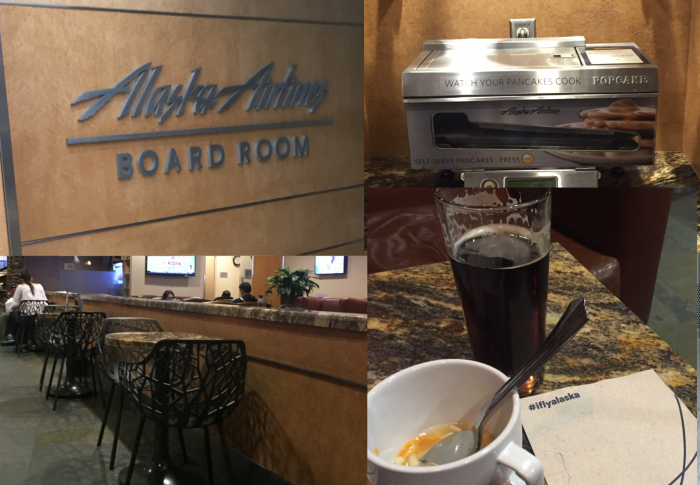 The Bad:  Small lounge, not much complimentary food available, but selection is somewhat in line with other legacy US domestic lounges.  [Some additional cooked to order meals available for $8]

The Good: Microbrew beers on tap are complimentary and there is even a sign at the bar that says “No Tipping” which is rare in the US!  The bartender even refused a tip another customer offered.

After a quick stint in T6, I was ready for bigger and better lounges.  So I set off for the Tom Bradley International Terminal (TBIT) which is on the other side of T4.  I retraced my steps through the tunnel back to T4, then walked upstairs to the connector between T4 and TBIT (which took only about 5 more minutes once I got to T4).  It is interesting to note that even though some AA flights do depart from TBIT, you’re likely MUCH better off going through security at T4 (especially if you have TSA Pre-Check) then taking the connector to TBIT.  On your journey you will get a great view of the security checkpoint for the International Terminal, and this is what you can potentially miss by not going through security there: 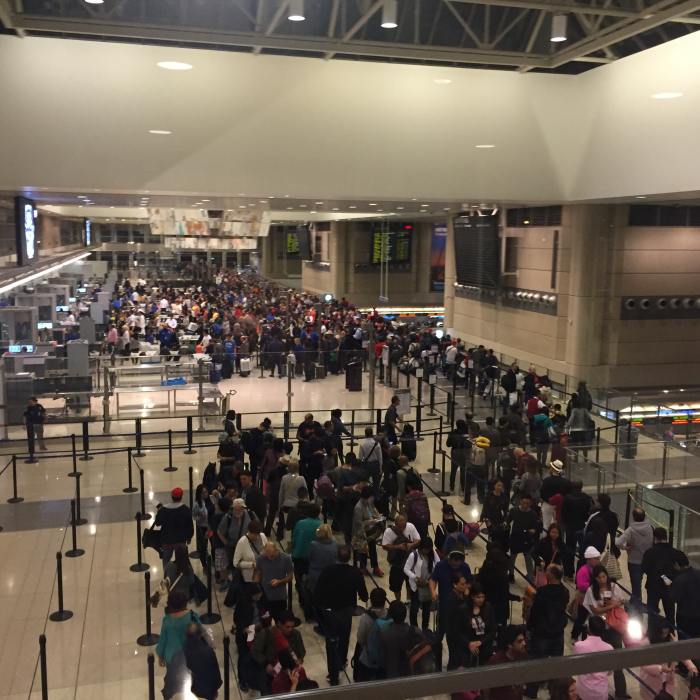 The other good thing about taking the connector to TBIT from T4 is that you arrive one level above the gates, where most of the airline lounges are located, almost right to the entrance of the Qantas lounge (which basically functions as the First Class lounge for the oneworld Alliance. 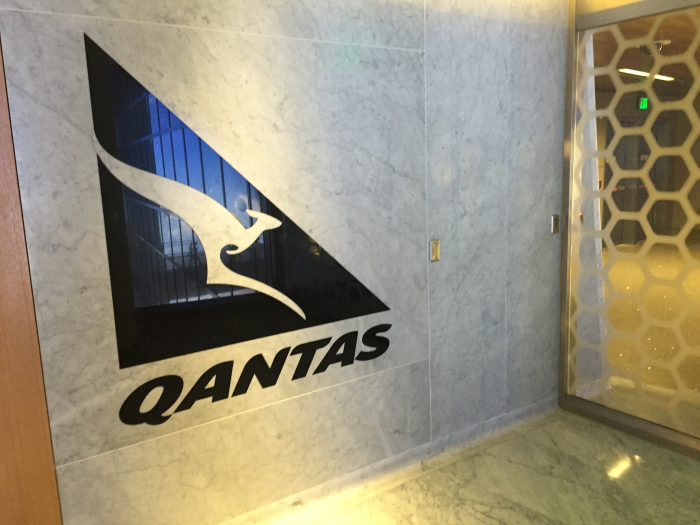 This lounge is arguably one of the best (if not the best) airline lounges in North America.  There is a large lounge area where there are self-serve light snacks and wines and other beverages available.  There is also a sit-down restaurant-style area with full table service where you can order a full meal with cocktails, champagne, appetizers, desserts and more.  Here are a couple of pictures showing the lounge space with open kitchen area and some of the options on the menu that you can order whatever you want from, all complimentary of course: 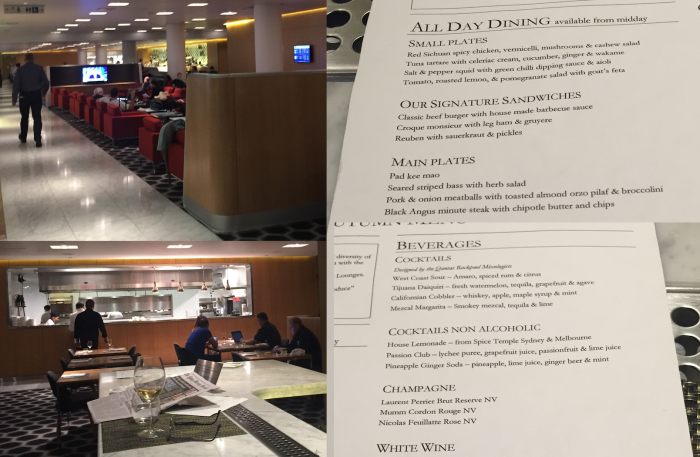 I hadn’t eaten on my incoming flight and only ate some soup in the Alaska lounge, so I decided to try the Tuna Tartare for an appetizer and the taco of the day which was a Korean BBQ beef taco.  I have to say both of these dishes may have been the best food I had on this trip, especially the tacos! 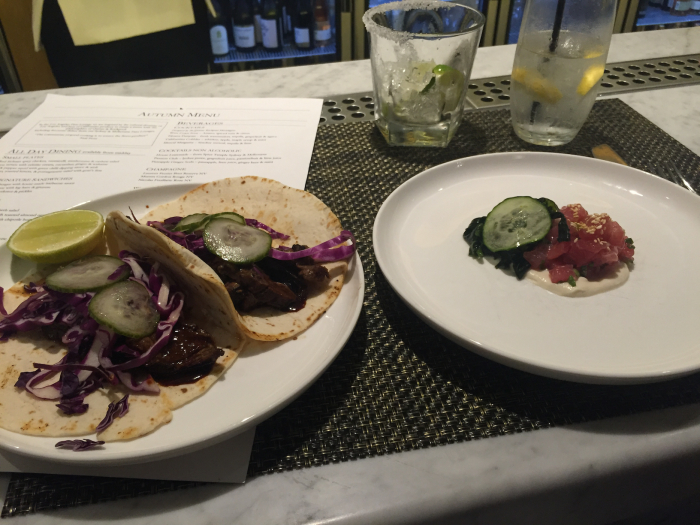 I sat at the bar instead of at a table as I was traveling on my own, and had excellent service from a very attentive bartender and washed these two dishes down with a smokey Mezcal margarita and Canadian Icewine.

The Bad:  Not much bad to say about this lounge, but I guess the lack of substantial food in a buffet format could limit choices for passengers that don’t have much time to spend in the lounge.

The Good:  The food and service are unbeatable, and who doesn’t love an Australian accent?

After this, I left to check out the oneworld Business class lounge down the hall to see how it compared.

A short walk away from the Qantas lounge is the largest airline lounge at LAX, the oneworld Business class lounge, a massive 40,000 square foot space with seating for over 600 passengers and 16 separate shower suites.

Access is restricted to passengers traveling internationally in First or Business Class on any oneworld airline or passengers holding Emerald or Sapphire status in the oneworld alliance and traveling on a oneworld flight.  American elites traveling solely on American Airlines flights within North America are NOT allowed access to this lounge (except when traveling to Mexico City or when traveling in First or Business Class on a 3 class domestic flight, currently LAX-JFK or LAX-MIA).

The lounge itself is rather dimly lit, but a nice place to relax and unwind before or between flights.  When you enter the lounge there is a bar to the right where you can “self-serve” wine or order beer or cocktails from a bartender.  There are many different areas in the lounge that contain unique seating configurations, including one circular seating area centered around an indoor fireplace. 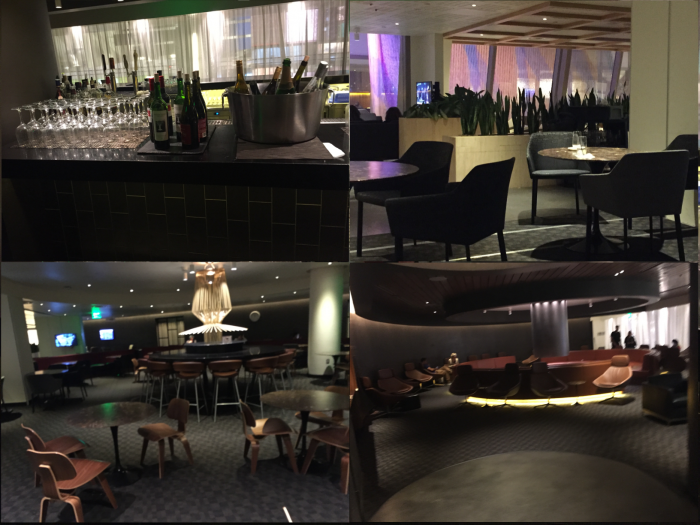 The food in this lounge is all self-serve buffet style with a few main dishes along with a salad bar and some desserts and some iced tea and fountain soda. 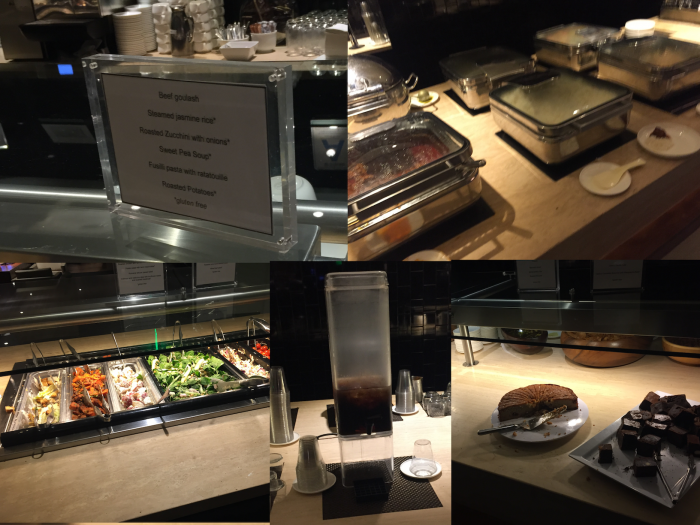 The Bad:  The dim lighting kinda me a bit tired (of course just coming off a 6 hour flight and being awake for the last 20 hours or so may have had something to do with it!)

Access restricted to Business and First class passengers departing on an international SkyTeam flight (there is a separate smaller first class lounge for Korean Air first class customers located next to this one) or SkyTeam Elite Plus members traveling internationally in any class.  Priority Pass members can access this lounge as well.  Similar to UA and AA policies, domestic Delta passengers without Priority Pass membership would not be allowed access even with SkyTeam Elite Plus status.

I’ll let the pictures do most of the talking here, but it was probably the least impressive one on the tour. 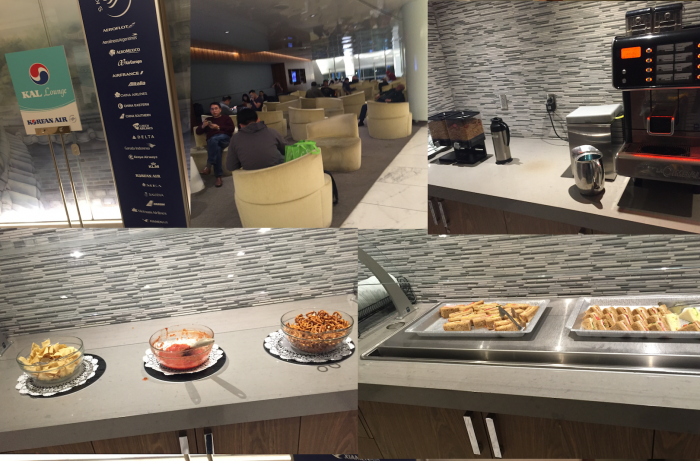 The Bad:  No hot food options (aside from instant noodles) and no champagne or sparkling wine that I could see (although I didn’t ask as I’d had enough to drink at the other lounges by this point)

The Good:  Decent lounge to relax in if you don’t have elite status and you have a flight departing from the international terminal.

On my last stop of the tour, I was disappointed to find out that the Flagship lounge at LAX is being remodeled and won’t reopen until the middle of 2017 according to staff.  But they do have a “makeshift” Flagship space for now carved out of the regular Admirals Club here.

It was a bit of a maze to get there from the main check-in desk, and by the time I got there I felt like I should have brought along a hard hat and some safety goggles: 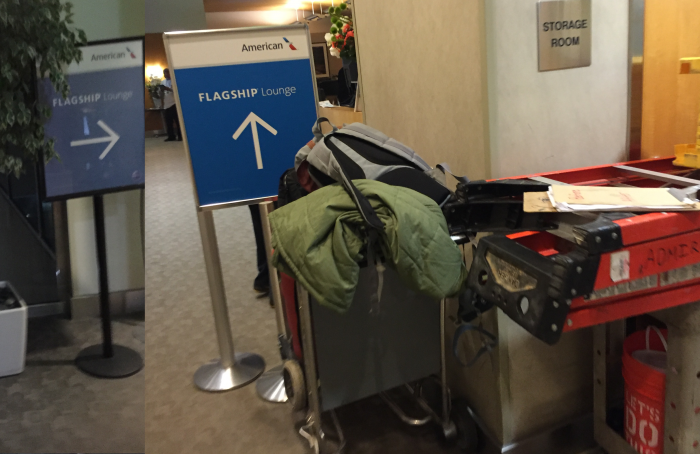 After visiting all of AA’s flagship lounge locations in the US in the last year (JFK, ORD, DFW, and the old LAX one) I was a bit shocked that this was going to be the replacement for their first class/top tier lounge at LAX for the next 8 months or so.  They could have done a much better job on the temporary space, but we will have to see if the work pays off when the newly remodeled lounge opens next year.  The space now is pretty plain.  Small seating area, two Coke coolers, one with mostly alcoholic beverages and one with non-alcoholic ones, an espresso machine, and a side conference room containing a few hot dishes (but by the time I got here they were clearing some of the hot dishes away; it was almost 1am now). 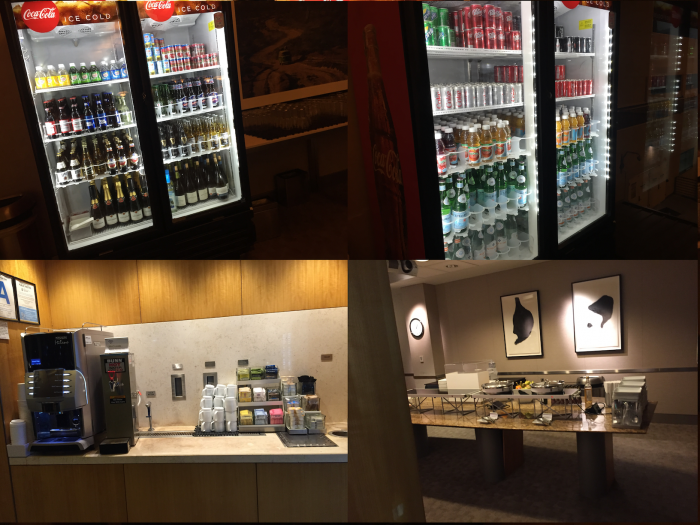 The Bad:  Badly planned temporary space that lacks a good deal of what you would normally find in an American Flagship lounge.

The Good:  It’s only temporary until the new lounge opens next year; American EXPs can still access the Qantas lounge when traveling on international flights, and it’s only a short walk away.

It’s always nice to have options when you travel, and lounge access is one of those perks that makes long layovers in an airport a bit more bearable.  Large airports such as LAX have many different lounge options, and it pays to do your research in advance especially if you have a limited amount of time to spend.  What are your thoughts on lounges at LAX or airline lounges in general?  We will be reviewing more lounges and airline products here at LoyaltyLobby in the coming months.

Le Club AccorHotels Worldwide Up To 40% Off Private Sales November 9, 2016 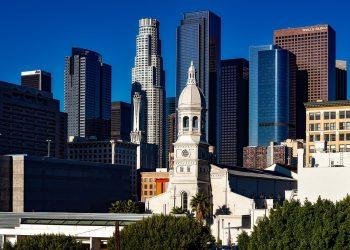