When I was trying to access my IHG Rewards Club account this morning to check if the Royal Ambassador upgrade that I had seen the night before was still there, I was presented this horrible message both on the app and browser. 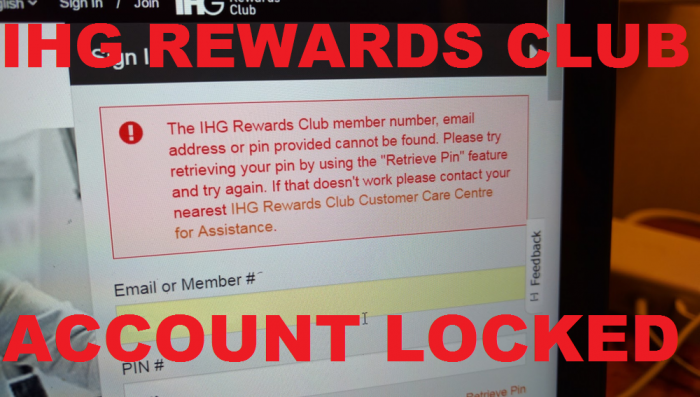 IHG Rewards Club used to freeze and lock accounts left and right sometimes for merely registering for multiple overlapping promotions they were running. Accounts freezes were also common if IHG Rewards Club thought that member had more than one account.

So, I decided to call the Ambassador Service Center first using the US toll free number to only receive the message that it was open during certain hours. Then I called the number in the UK (that gets answered in the Philippines).

The reason for the account freeze was the fact that I had tried to purchase points (not even transfer mine) for a third party. After I verified the address and my last stay (took some time to remember where was the previous one), they unlocked it.

Just weird that they would lock/freeze and account merely for trying to purchase/gift points to a third party? I could perhaps understand this had I tried to transfer some of mine (roughly 1.4M) but you cannot do this with IHG Rewards Club.

The messages that you get when your account is locked/frozen are cryptic. They simply just state that the account number, email address or PIN cannot be found. You sometimes see similar error messages when the IHG Rewards Club system is down.

You would think that IHG Rewards Club would have decency to drop an email to a Royal Ambassador member that spent 110 nights in their hotels during the last Ambassador year to let him/her know, but apparently no. Just shows how little they value their members.