A LoyaltyLobby reader dropped me a question by email why I have chosen to go for BA Gold instead of AA EXP?

I was wondering how come you favour being/keeping BA GOLD, as opposed to for example AA EXP

Just curious, if BA is an interesting alternative now with the coming changes to AA, and seen from a European perspective..

I have had American Airlines Executive Platinum status for quite a few years in the past and have lifetime Platinum status after reaching 2 million miles (didn’t used to matter how you earned them) with them that maps to Oneworld Sapphire.

I made British Airways Gold status for the first time the other year and got more than 5,000 Tier Points in last time around that made me Gold Guest List member with Concorde Room Card. The requalification criteria for Gold Guest list 3,000 but you still need 5,000 for the Concorde Room Card.

If someone lives in the States (I no longer do), going for American Airlines Executive status is IMHO no brainer. You get unlimited domestic upgrades and get the (now reduced number) systemwides. American Airlines moved to awarding miles based on the revenue instead of miles flown. Next year the airline will also have dollar requirement for qualification purposes.

Star Alliance used to be my preferred alliance but I have flown more on the Oneworld as of late partially because of Qatar Airways. Star Alliance doesn’t have any member airlines based in the Middle East.

I like the fact that I can book most partner airlines online with British Airways while redeeming American Airlines miles always requires me to give them a call.

Redeeming Avios for long-haul business or first class tickets is usually bad proposition (unless you have 2-4-1 voucher) but short-haul redemptions and RFS (Reward Flight Saver) on BA metal are often good deal.

You can also earn upgrade vouchers with British Airways first for reaching 2,500 Tier Points and then again at the 3,500 level. You can use these vouchers to upgrade the entire trip when on BA metal (ticket can sometimes contain flights on other airlines as well). If you do the booking via travel agent, the upgrades book into revenue first (in case of upgrading from business) and there doesn’t have to be award availability on the flight.

Gold Guest List members can also open up award space for up to four people twice a year that only requires certain revenue bucket to be available. This is crucial for those that wish to use their Avios around the holidays. I used this benefit the other week to book economy LHR-KEF return for 17,000 Avios.

British Airways Gold is far easier to get if you fly on premium cabins compared to American Airlines Executive Platinum one.

Whether one prefers BA Gold over AA EXP really depends how you use the membership and how much flights one has with American that are eligible for complimentary upgrades.

I would say that, if one is able to get to the Gold Guest List level, I would certainly choose BA over AA if not living in the States. 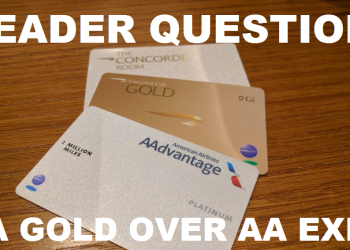