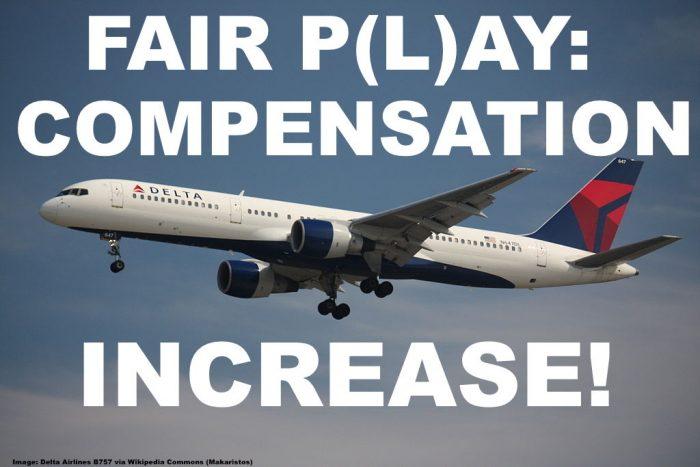 The announced changes include an increase in base pay as well as the 401k accounts of eligible employees which sends a clear message that the employees are the core of Delta’s continued success.

Airline employees have been hit hard in the past decade post 9/11 and various Chapter 11 bankruptcies of North American carriers and it’s positive to see that companies such as Delta which performed very well in recent years are giving credit to their staff as their performance ultimately drives the success of the entire airline.

As Delta people continue powering outstanding financial and operational results, the company is continuing to invest in them.

The airline announced today that it is increasing most employees’ base pay by 6 percent while continuing to offer a generous profit sharing plan. The company also is increasing its automatic 401(k) contribution to three percent while maintaining a dollar-for-dollar match of the first 6 percent of eligible earnings.

In a memo to employees, Ed said, “I’m proud to say that Delta has led the industry in compensation increases for our employees the last several years and has set the standard for other airlines to follow. This increase, coupled with our profit sharing program that also leads the industry by workgroup, enables us to maintain industry leading total compensation among our global competitors.”

Details of the exact numbers and how the compensation increase is structured can be found in the following memo that was sent out to Delta employees.

Most significant is the increase in base and bonus/performance pay.

Effective April 1, 2017, eligible ground and flight attendant employees will receive a 6% base pay increase at all steps of the pay scale. This means that in the space of just two years and including the 18.5% in increases in 2015, the compounded effect of your base pay increases is more than 25%.

In addition, a 6% pool will be made available for merit employee pay increases based on their performance as well as their current pay relative to their peers.

This is a great motivation for Delta employees to keep up quality performance and serve their customers in a proper way (at least for the most part),

It’s very fair when a company such as Delta Airlines recognized the contributions of their employees and rewards their performance financially. As far as the North American carriers are concerned I’d put Delta and JetBlue on top of the food chain as far as experience and customer service is concerned.

Whenever I set foot on American and United I have the impression that the customer is mostly there so the staff has someone to command around. Not a very positive experience.