Lufthansa’s pilot union announced today that they would go on strike this Wednesday November 23, 2016. This would be the 14th time the pilots are on strike after the previous pay deal ended back in 2012. 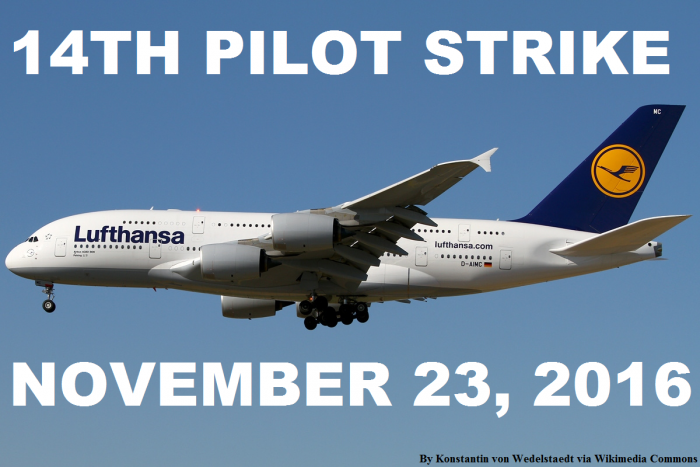 The cockpit union has called the strike for all continental and intercontinental routes on that day. The management pilots may be able to operate some flights. This will not affect flights that are operated by other airlines of the Lufthansa group such as Swiss and Austrian.

You can access Lufthansa’s web page for this announcement here.

Here’s an excerpt from DW (access the entire piece here):

The threatened walkout, which was announced on Monday, is meant to increase pressure on Lufthansa’s management, in the context of a long-running pay dispute.

The pilots’ union, called Vereinigung Cockpit (VC), said the strike would run for 24 hours from midnight. It would affect all of Lufthansa’s short- and long-haul flights starting from Germany.

Lufthansa’s 5,400 pilots remain unhappy about management’s reported offer to raise their wages by 2.5 percent by 2018.

It is likely that this strike will go forward, like the previous 13, unless the airline is able to strike a deal in the next 24 hours.

You have to bear in mind that the strike will affect flights on Thursday too because airplanes and crews are out rotation especially at the outstations.

Remember that Lufthansa has duty to care in case of strikes due to the European Union law EC 261/2004. It means that the airline must provide accommodation, meals and phone cards to affected passengers.

Lufthansa is also required to rebook the affected passengers at the earliest convenient flights (not for the airline but for the passengers). They may try to limit the selection of airlines to Lufthansa Group or Star Alliance ones but they certainly can rebook also on airlines such as British Airways and Emirates.

It is not a surprise that these strikes begin during the busy year end holiday season….