Eleven days ago, I was on a miserably delayed British Airways flight 444 from London Heathrow to Amsterdam than ended up being delayed by more than four hours (2AM+ arrival) and resulted in a plane swap in the process. 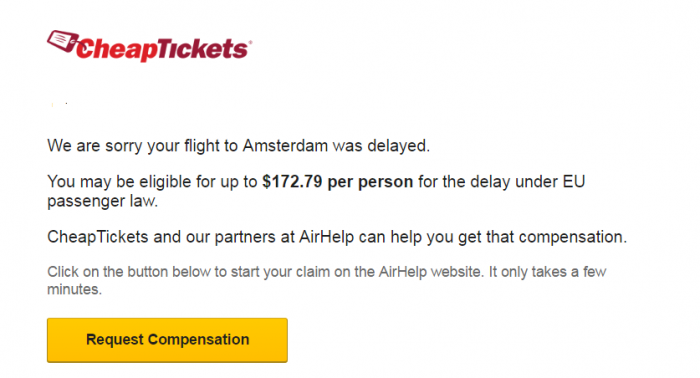 I was well aware of that I could claim 250 euro compensation per EC 261/2004 (did that actually today) but was surprised that CheapTickets actually reminds passengers when their flights are delayed and eligible for cash per EU rules.

Seems that the sum included in the email is after the 35% cut that this company processing the claim takes (and probably pays something out of it for the CheapTickets to send these email reminders out).

Surprising that an agent owned by Expedia is reminding that due to the delay customer is eligible for compensation. You would think that the airlines aren’t too happy about this?

Let’s see how easy it is for BA to process the 250 euro compensation to my bank account.

Seems that I have another EC 261/2004 claim in the making. My Iberia intra-Europe flight is currently delayed by 2 hours and 15 minutes. As long as it arrives two hours late (not touchdown but when the door is opened) this is another 250 comp.