Hyatt Gold Passport has outdone itself once more when it comes to the matter of absolutely terrible marketing and IT infrastructure after a widely advertised online Q&A with Mr. Zidell turned awry.

The Reddit session which was advertised as a way of mutual exchange and clarification of open questions ended up as a pathetic marketing tirade with nothing but lame excuses.

Every time Hyatt comes up with a new downgrade and infrastructure failure of their brand I ask myself how low can they actually go and sure enough they always manage to surprise me again as the race to the bottom apparently has no end.

You might remember that two weeks ago I wrote about (see here) Hyatt sending out emails to their members inviting them for an online Q&A session with Vice President Jeff Zidell to discuss upcoming changes of the Gold Passport program which has been absolutely massacred.

Well for one the email said Hyatt would get back to the recipients on the day of the Q&A with the exact link to the discussion room on Reddit which never materialized. I ended up traveling that day so it wouldn’t matter but I found the link a day later in various Facebook groups and boy oh boy I can only say what happened there wasn’t pretty.

I’d have expected Hyatt to be a bit more prepared, upfront and honest with their communication if they send their Vice President into a discussion about the most aggressive program changes to date but this was an embarrassment.

That didn’t sound too well…

No happy campers here either! 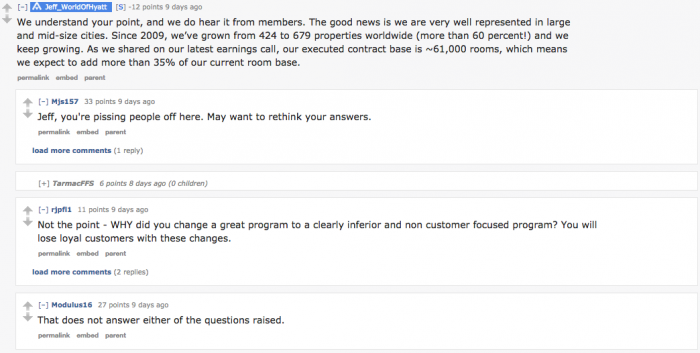 And then a couple customers expressed their discontent about the absolutely ridiculous names of the new program.

I think it’s safe to say that this Q&A didn’t go over very well and that it’s apparent that Hyatt neither planned or desired to appease their members in any way. Something on this level just contributes to the bad emotions many members have over these changes.

Some of the keywords from the entire thread are that members feel betrayed by Hyatt, embarrassed by the new names and belittled by the unprofessional communication extended to them.

Did I expect miracles from this discussion? No, certainly not. But I’d have expected that there is a clear approach and preparation to the scathing inquiries of longstanding, disappointed members that were to be expected.

This was unprofessional and did more damage than good in my opinion. Why waste time and resources if you can’t meet the expectations and enrage people even more? Did you participate in this discussion and if so, what was your impression of the entire charade?