Malaysia Airlines has reported positive numbers after a long period of heavy losses with passenger revenues and overall numbers being up in two digits. 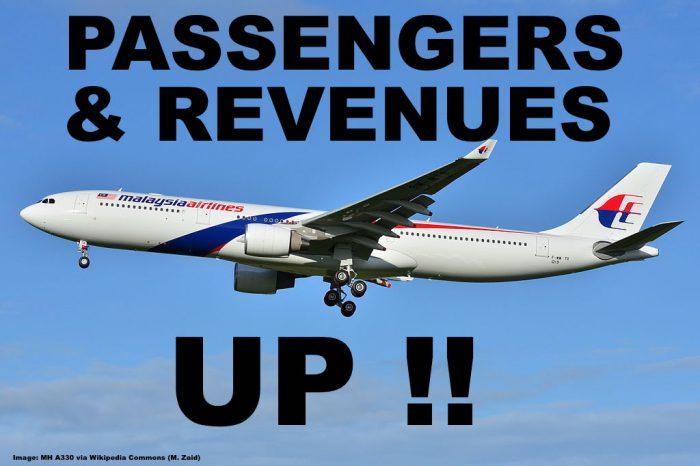 The carrier which underwent management changes and company restructuring has also adjusted their fares and route network which appears to have been successful.

Since then the carrier underwent a management change, a controversial restructuring program that included large scale sackings of employees and an overhaul of the route network. On top of that MAS continued to run frequent promotions with very good deals in Business Class which we frequently reported about as a great source for Elite Miles.

“Marketing campaigns were kick-started in August and September after a lull period, focusing on the all-inclusive value fares offered with no hidden extras,” it said in announcing its latest quarterly update today.

Malaysia Airlines group managing director and chief executive officer Peter Bellew said the focus in the first half of 2016 was on reducing costs and improving the customer experience.

“We believe we will improve on our targets for 2017 as set out in the MAS Recovery Plan. Our guidance is heavily dependent upon there being no unexpected adverse declines in 2017 airfares and a possible headwind could be intense competition,” said the group.

Indeed airfares have been extraordinarily cheap this year and while I usually redeem a lot of miles I found myself to fly almost exclusively on revenue tickets for the vast amount of 2016. The constant sales in Business Class for Malaysia Airlines tickets ex Bangkok and Phuket have been the icing on the cake.

Let’s hope Malaysia Airlines will see this improvement in revenue as a success resulting out of their marketing and sales tactics that will keep these Business Class sales coming back during 2017 as well.

It’s good when an airline is in the plus so that they see a perspective for their operations and new investments in product and facilities. With introduction of the new Business Class seats MAS has set a new standard as these are very comfortable and

Obtaining Marriott Bonvoy Platinum or Titanium Tier – Is It Worth...

A frequently discussed topic is the issue of whether or not it's worth to stay an extra 25 nights at Marriott Hotels in order...

Reader Question: Why Can’t You Buy Hotel Or Airline Status?