If you ever plan to send your four legged friend on a trip you might want to avoid Mexico’s Interjet where you might find out that they lost your companion during loading but later offering a reward to get him back. 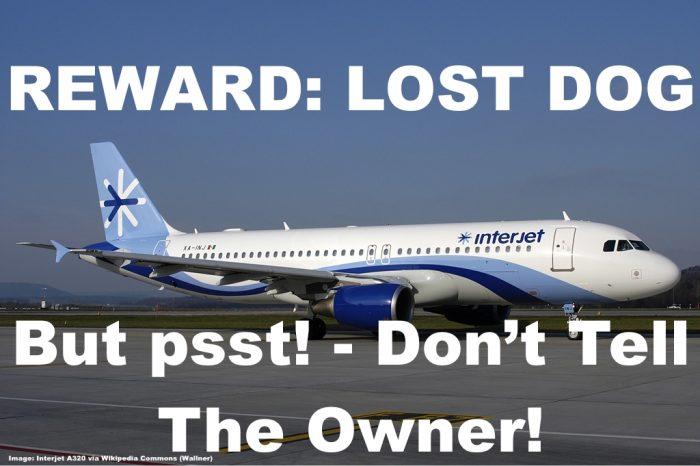 The airline had lost the animal which a passenger gave into their custody for transportation and then put out a ‘reward for finder’ ad without ever telling the owner that the dog was missing.

Good news ahead: The dog was eventually found in Mexico City by their owners but the circumstances are questionable at best as you will see.

I found this story while reading some articles on Travel + Leisure (access here).

After losing a dog in cargo and neglecting to inform its owner, Mexican airline Interjet posted a reward seeking the lost animal. The dog, named Mika, was found in Mexico City on Wednesday after it had been lost for two days.

Interjet posted images of the dog with the hashtag #BuscandoMika (#LookingForMika) to social media, hung fliers around the city and offered $5,000 peso (US$250) reward.

Alvarez and her husband, who live in Houston, immediately returned to Mexico City to look for her dog as soon as they were informed. Both Alvarez’s and Interjet’s posts were shared on social media thousands of times.

After nearly two days of searching, Mika was found on Wednesday. Alvarez thanked the man who found Mika, Dr. Miguel Ángel Rodriguez, for “his real commitment to puppies.”

The Humane Society of the United States strongly discourages travelers from flying with their pet in cargo. In addition to loss, animals can experience deprivation of oxygen or heat stroke in cargo hold.

The airline should have contacted the captain and the passenger while the flight was still on the ground. It sounds like the handlers who caused the problem weren’t brave enough to face the owners and explain how it happened.

It seems that Interjet took responsibility and tried their best to help the passengers out for whom it was a very sensitive issue (understandably).

As far as the recommendation goes not to let your dog travel in the cargo, sometimes you don’t have a choice. Especially when it’s a larger dog there is no choice other then let him fly in the cargo hold. Large animals are usually not allowed in the cabin unless certified as a support animal for the disabled (including emotional support animals in the U.S.).

Thankfully the dog was found and returned to the owners who were certainly happy to no end.

The fact that the handlers actually broke the carrier in which the dog was accommodated in shows you how rough things are being handled even when live animals are involved – sad! I’d avoid to subject my pet to such a procedure whenever I had the choice.

Roosevelt Hotel (more than 1,000 rooms) in New York City that opened its doors in 1924 is set to close this month based on...