Heavy snow storms in the Midwest of North America are causing havoc for travelers as flights are being cancelled, delayed and airplanes even overshoot the runway due to ice and snow. 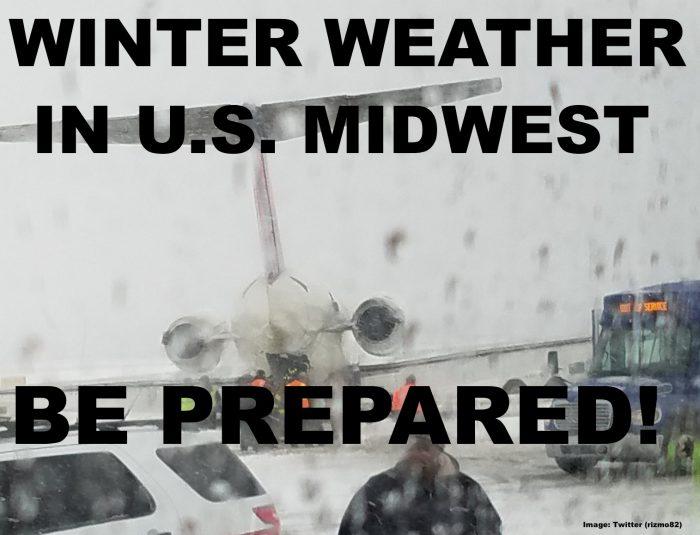 A Delta flight with 65 passengers on board slit off a taxiway into the grass at Detroit Metro Airport and passengers had to disembark via stairs right into the middle of winter wonderland.

It is this time of the year again and while Midwesterners are winter proven people the season always grips the airports with an iron fist, causing thousands of passengers to be stranded in the airports across the region.

You can find weather info on AccuWeather (access here).

A multi-faceted storm will continue to deliver snow and a change from rain to snow bringing disruptions to travel and daily activities over part of the midwestern and northeastern United States through Thursday.

Gusty winds accompanied the rain and snow from the storm. Winds gusted between 50 and 60 mph across parts of Illinois and Indiana on Wednesday. The heaviest snow extended from eastern Illinois to western Indiana and much of Michigan with most areas receiving between 6 and 12 inches of snow.

While the northern and western suburbs of Chicago were spared from the worst of the storm’s impacts, enough snow fell to coat grassy surfaces. Hundreds of flights were cancelled at the Chicago O’Hare and Midway airports.

Heavy wet snow succeeded in reaching the St. Louis area. The clinging nature of the snow caused power outages in the region. Over 3 inches of snow fell in the city.

The weather chart shows an unsettling week ahead for folk living in or traveling through the Midwest.

Meanwhile the Detroit Free Press (see here) reported about the fate of passengers traveling on Delta flight 724 to Metro Airport.

A Delta flight landing this morning at Detroit Metro Airport slid off a taxiway and into the grass. Delta confirmed the incident this afternoon, saying none of the 65 passengers or five crew members were injured.

The flight, DL 724, departed from Buffalo at 10:05 a.m. and was scheduled for arrival at 11:27. Passengers exited the aircraft from its tail upon the rough landing.

“Delta Flight 724 … landed and was turning from the runway onto the taxiway when it left the pavement, stopping in the snowy grass,” Delta spokesman Anthony Black said in a statement. “The passengers were off-loaded and bused to the terminal about an hour late. All bags were recovered.”Detroit Metro Airport added in a statement: “Shortly before noon today, a Delta aircraft, inbound from Buffalo, NY, slid off a taxiway at Detroit Metropolitan Airport. There were no injuries.

The Airport Authority and Delta Air Lines worked together to safely deplane the passengers and transport them to the terminal. Delta Air Lines is assisting any passengers impacted by the incident. The cause is under investigation.

“Despite the incident, operations are continuing at DTW. However, due to the weather conditions, travelers are reminded to check with their airline to confirm their flight status.”

One Delta passenger on the flight tweeted photos of the ‘arrival’ and deplaning in Detroit: 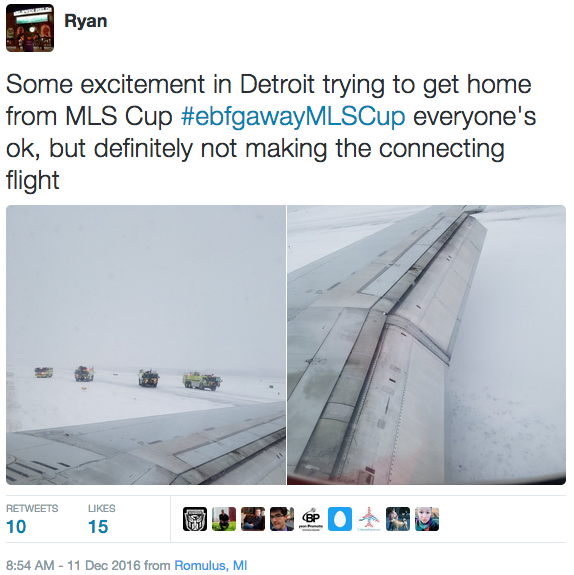 None of the passengers of crew were injured when the plane left the taxiway into the grass (snow) though these experiences are certainly everything but pleasant.

Should you travel through airport affected by this it’s highly recommended to keep an eye on your flight status and maybe sign up for alerts.

If you end up being delayed or cancelled it can be very hard to find a hotel room in the airport area during such disruptions and usually airlines in the U.S. are not giving out vouchers for hotels though I had some success with that in the past as top tier of various programs (United 1K, Delta Diamond). If you have a travel insurance it might be worth it to consult your policy to learn about your coverage. Some premium credit cards such as American Express Platinum contain a travel insurance as well.

Argentina Will Reopen For Neighboring Countries This Summer