As I wrote earlier today (access here), Sheraton Brussels filed for bankruptcy at a Belgian court on Tuesday (December 13). It was unclear at the time when the hotel would close down or if the owner would try to come up with an alternate plan to keep it open. 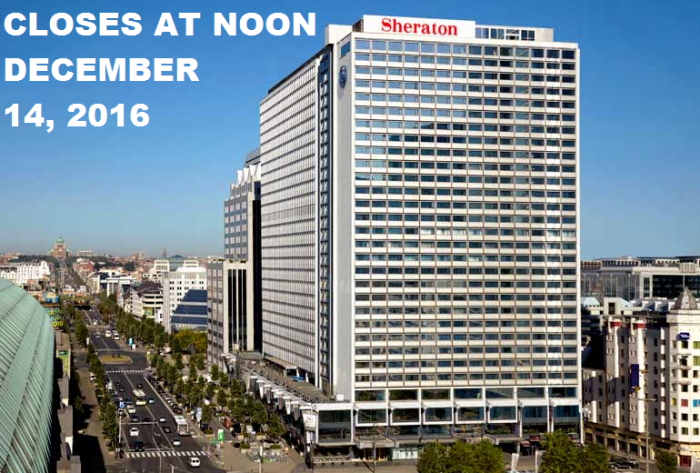 It is confirmed now, however, that the hotel will cease operations and close its doors at noon on December 14, 2016. Guests will be reaccommodated at other Starwood or Marriott hotels in the city.

Marriott/Starwood will honor all the existing awards, prepaid and other reservations at group’s other hotels in Brussels.

Here’s the press release from Starwood:

DECEMBER 13 2016 – Following the bankruptcy of SBH SPRL, the operator of the Sheraton Brussels Hotel, the property has been forced to close. The hotel will close as of 12 noon on 14th December 2016.

The forced closure of the hotel is due to the financial situation of the operating company and is not related to the Sheraton brand.

Sheraton has successfully managed the hotel from the day of opening in 1973. In 2009 Sheraton signed a long-term management contract with SBH SPRL. Hotel management are now working with all current and future clients to secure alternative accommodation in the city.

Sheraton understands the impact of the bankruptcy of SBH SPRL on the 200 employees of SBH SPRL. While they are not employed by Sheraton, or any affiliated companies, the group appreciates and values the work that they have done to make the hotel a success.

Here are other Starwood options in the city:

And the Marriott ones:

Affected guests should consider moving to the Marriott or Renaissance hotels in the city. The other Sheraton is by the airport, although usually more expensive. Guests can also keep in mind that there are Aloft and Four Points properties in Brussels.

Bankruptcy in Europe tends to mean that the affected business will close abruptly unlike in the United States where they can keep trading under chapter 11 (almost forever) while reorganizing.

I would probably give Starwood customer service a call and have my existing reservation moved to one of the other hotels before they fill up.

The hotel was blaming drop in number of guests (25%) after the terrorist attack last year for the financial issues as well as needed refurbishments due to asbestos. The hotel was in terrible shape based on my stay there last year. It sad to see this hotel go that has been Sheraton branded since 1973!

Belgian press is implying that it is likely that someone will buy the property merely for the land and build something else for the space.

There used to be Le Meridien in the city as well that closed due to bankruptcy and later reopened as a Hilton.