The British Airways cabin crew union UNITE had their members vote in favor of labor action which could see a strike as soon as 22ndDecember 2016, throwing passengers Christmas travel plans into limbo. 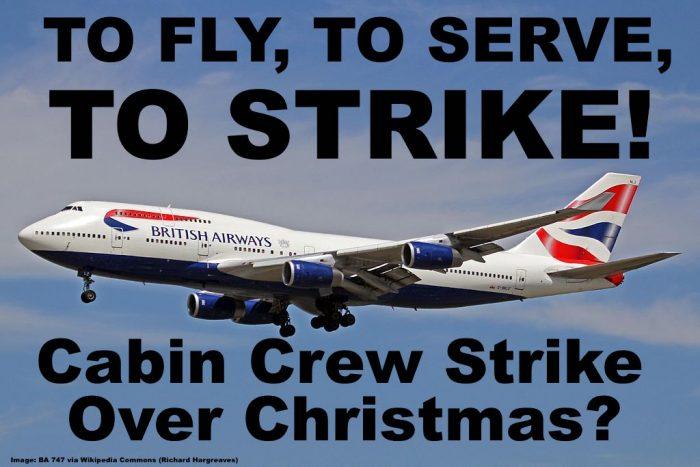 This particular union represents about 4,000 flight attendants stationed at Heathrow Airport which makes about 15% of the total crew workforce according to media reports.

Voting for labor action during the Christmas Holidays is probably the most disruptive thing you can do at this time of the year. Even though 15% of the staff doesn’t sound that much it would still cause massive disruptions especially for the feeder flights into Heathrow.

You can read more about this development on BBC News (access here).

About 2,000 British Airways cabin crew have voted overwhelmingly for strikes in a dispute over pay, the Unite union said.

The workers, who represent about 15% of the airline’s cabin crew, were balloted about the plan to strike at Heathrow. The vote comes after cabin crew rejected a 2% pay rise.

Strike action could begin after 21 December, but Unite has not confirmed whether the strike would affect travellers over Christmas.

Tensions have been running high over pay and conditions at the airline. Some 79% of crew that took part in the ballot voted for action, Unite said, urging British Airways to return to the negotiating table.

The dispute concerns about 4,000 staff who have joined the airline since 2010 on “Mixed Fleet” contracts, who do not feel they are paid enough. About 2,500 of them are Unite members.

If true then BA flight attendants would be considerably worse off than their colleagues at other European airlines such as Lufthansa or Air France. It also represents foul play on the part of the carrier even though what’s advertised in a job description is one thing but you see the final numbers before you actually sign your contract when it is still possible to walk away. I can’t imagine how you can live with roughly 1500 GBP in the London area.

According to a recent Unite survey, half of Mixed Fleet staff have taken on second jobs to make ends meet, and more than two-thirds were going to work “unfit to fly” because they could not afford to be off sick.

It said 84% reported experiencing stress and depression since joining BA because of their financial circumstances. Some even admitted sleeping in cars between flights, because they could not afford the petrol to get home.

Unite regional officer Matt Smith said: “Not only are the pay rates indefensible, but in aviation, low pay is a safety issue.”

A BA spokesman said: “We are extremely disappointed that the union is creating uncertainty for our customers.

“Mixed Fleet Unite represents about 15% of our cabin crew. We remain focused on resolving this issue as quickly as possible without any disruption to customers.”

Obviously both sides play on emotions here but at the same time the mentioned salary is not a living wage in one of the most expensive cities in the world, even if you live in the outskirts.

So far there are no news about possible scheduling implications of this vote and proposed action and I’m sure BA will update their customers in due time.

When writing about the Lufthansa pilots strikes during the past week I expressed that I feel their action was unwarranted considering the generous pay and working conditions they already enjoy. In the case of these flight attendants the matter is entirely different. Yes these people have a choice who they work for but in the end it’s also grotesque that BA pays some new staff members that are still very crucial to their operations such peanuts.

Keep an eye out for your reservations during the holiday period and remember that BA will have the obligation to rebook you onto different carriers even in case of a strike should one of your flights be cancelled or delayed causing you to miss your connection.