In the last few years, we’ve seen a significant transformation in the traditional lodging industry. Booking sites for private homes and apartments such as Airbnb and Homeaway have opened up many more options for travelers beyond traditional hotels. 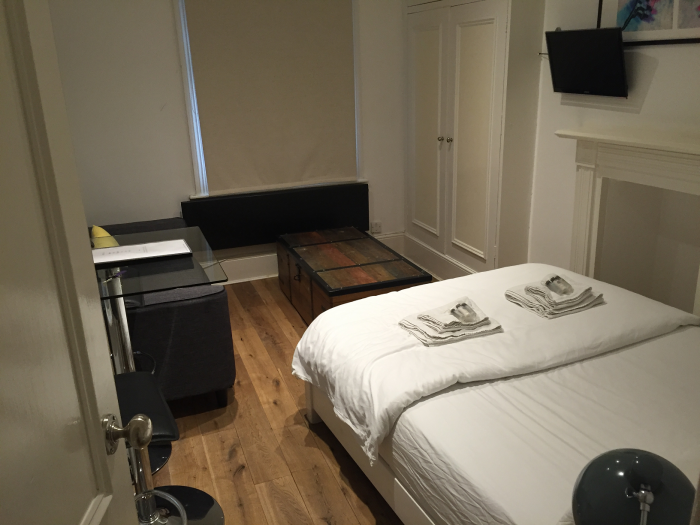 But on the other side, traditional hotels and online travel agencies have seen their revenues and profits squeezed quite a bit by these and similar sites.  This has led some of the traditional online travel agency sites to include more “apart-hotel” type properties in their inventory of lodging options, particularly in big cities, properties that have all the amenities (or lack thereof) of apartments but rent like hotels.

In the past, these types of properties were usually targeted toward long-term travelers or business professionals that needed a place to stay for weeks or months at a time.  But recently, more of these types of properties have been appearing on online travel agency sites and bookable for as short as a one or two night stay. I had the opportunity to try two of these apart-hotels on my recent trip to London. And I must say I was quite impressed. These properties have somewhat mixed reviews online, but my experience was fairly positive.

When searching for hotels on some of the major online travel agency sites, these apart-hotel properties will come up in the search results along with traditional hotels.  Some sites will let you filter these results based on property type (Travelocity hotel search example for London here):

If you look at the details on some travel sites you’ll notice that these properties haven’t been listed on these sites very long; many of these properties started appearing within the last year:

I booked my first stay for 2 nights at the Soho Adobe apartments Covent Garden/Soho about 2 weeks in advance of my trip. I noticed that Soho Adobe has separate listings for other neighborhoods in London but I preferred to stay in the Covent Garden/Soho area for the first weekend of the trip.  Since it was a popular weekend in London, I noticed most other ~3 star or above traditional hotels in these neighborhoods were renting for about £200-300 ($250-380 USD) per night.  But this apart-hotel came up as one of the cheapest options in my search at $160 USD per night plus 20% VAT which came to $192 total per night or $384 for two nights.  I had a $50 Travelocity Best Price Guarantee certificate which brought the total down to $334, so it was almost as if I got a place to stay for two nights for the price of one night at a traditional hotel.

I received an email from the property a few days after I booked which gave the exact address and floor of the property and asked me what time I would be checking in so that I can make arrangements to pick up the keys.  Since the company that manages the property that I was staying at manages several other properties in London as well, I was given the choice of picking up the keys at a centralized office location within a half mile or so of the property or I could make arrangements to meet a representative at a specific time at the property.  Since I was staying at another hotel the night before and was able to get a 2PM late checkout, I told the agent I would meet her at 2:30PM on check-in day (normal check-in times are from 2-7PM but late arrivals can be accommodated with proper notice).  The agent was waiting in front of the building when I got there and showed me into the property.  Here is what it looked like from the outside:

The apartment I rented was basically a fully furnished studio flat on the 3rd floor of a pretty narrow building (4 floors total, no elevator) smack dab in the middle of Soho (Brewer Street) complete with a small kitchen including stove with 2 burners, refrigerator and dishwasher, plates and glasses, cooking utensils, and even some bottles of various condiments on the counter.  There was a full size bed with a fairly comfortable mattress, sofa, small table with 2 chairs and an electric heater (no AC but didn’t need it this time of year).  The bathroom was quite small and contained a stand-up shower (no bathtub), and bathroom amenities and towels were left in the apartment.  Wi-fi was also included (passcode to login was in the apartment manual) and the speed was pretty fast.  Here are some pictures of the inside: 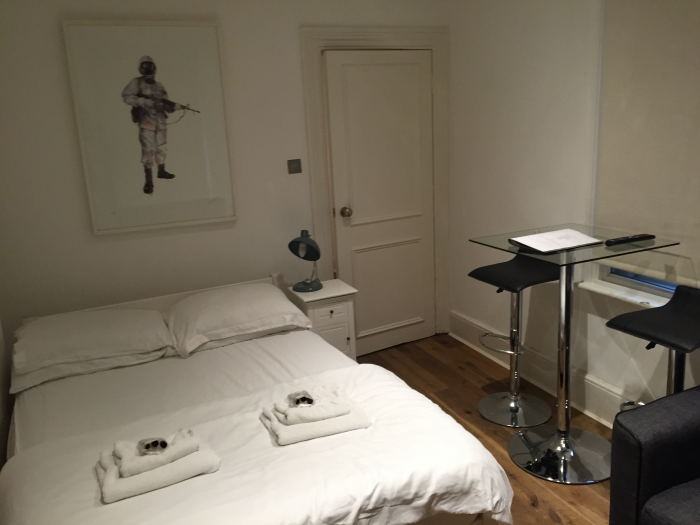 The only problem I had during my stay is that the electricity went out the first night for about an hour, although the surrounding buildings still had lights on. I called the number that was listed in the apartment guide for after-hours maintenance after about a half hour and one of the on-duty maintenance people answered right away.  He first thought I had maybe plugged too many things in and caused the main breaker in the fuse box in the apartment to trip so he told me how to reset it over the phone; but none of the switches were tripped so that led me to believe that there was something wrong with the main power supply to the building that was causing the outage.  He agreed to come to the building to take a look at it, and said he’d be there in about 20 minutes. However, after about 10-15 minutes longer, the electricity went back on and I called him back to tell him not to come.  And the lights stayed on the rest of the time I was there with no issues.

When it came time to leave (checkout time was listed on the Travelocity site as 10 AM but I was told 11 AM when I picked up the keys), I was told to simply leave the keys on the table and lock the door behind me (I didn’t have to make any special arrangements to return the keys).  I actually left around 11:15 but did not see anyone coming in when I left (I was told cleaning people come in between 11 AM and 2 PM).

After checking out of this property, I stayed with some friends that lived a bit outside the city for a couple of nights.  But I had planned to take a side trip by train to Manchester, England later in the week.  The direct trains from Manchester leave from Euston station which is in the northern part of central London, so I planned to stay somewhere near there the night before.  Again I looked on Travelocity and found another apart-hotel type property a few blocks from Euston station.  The total cost for this place on a Wednesday night was $101 USD, and I found a $25 mobile app coupon code online which brought it down to only $76 which is somewhat of a steal for a mid-week stay in central London.

This property (Studios 2Let North Gower) was slightly different than the first as it was a bigger building (64 studio units with its own check-in facilities).  I ended up being given a room on the basement floor; if I were to stay here again I would definitely ask for a higher floor, as it seems the underground train (tube) runs directly below the building and you can hear it every few minutes as it passes.  Other than that, the space was great, small size, but adequate for a short stay especially for one person.  This location even had a laundry room where guests could do laundry for free (detergent was sold at the check-in desk if needed).  Here are some pictures of my room at this property: 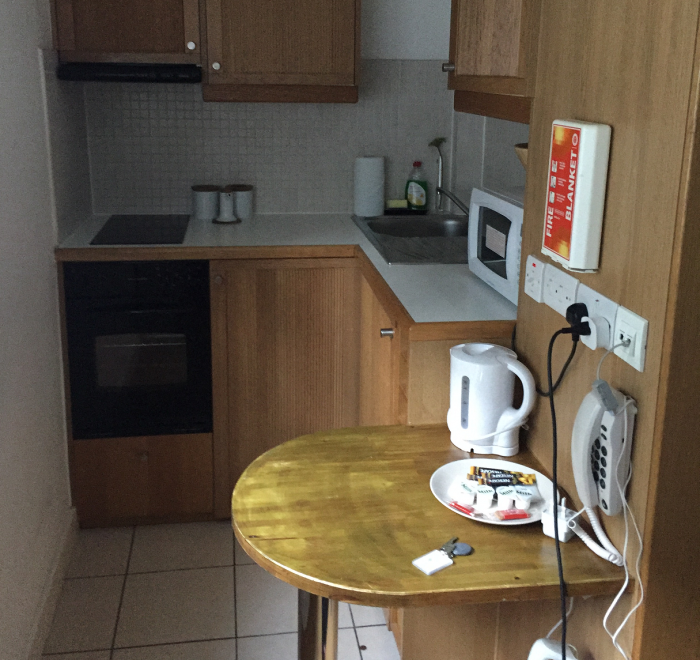 After reading some of the online reviews of these and other similar apart-hotel properties, I must say I was a bit nervous about trying them out since the reviews were a bit mixed, but I am quite happy with my decision as I was able to stay in the areas I wanted and paid much less than I would have paid to stay at a traditional hotel.

Keep in mind you will not get some of the traditional hotel amenities (breakfast, turn-down service, concierge service, elevators, daily housekeeping, etc.) but you also get some that you wouldn’t normally get at a regular hotel that could save you even more money on your trip (refrigerator, stove, microwave, laundry facilities, etc.). I will definitely keep these types of properties in mind for my next trip to London as well as other major cities I travel to in the future.