The U.S. Department of Transportation has issued a US$1.6 Million fine to American Airlines for violating the rules against long tarmac delays. 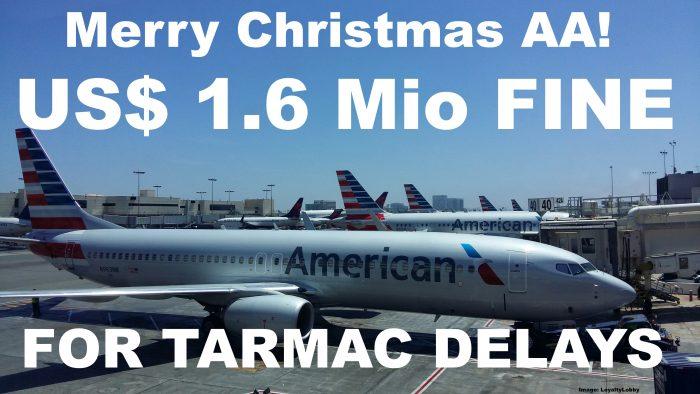 The law is supposed to avoid passengers being trapped on the tarmac while the airline incurs a delay for whatever reason.

The Department has slapped another airline (Southwest) with the same fine before and now it’s American’s turn to pick up their personal Christmas present just in time.

You can access the D.O.T Media Room with the relevant press release here.

The U.S. Department of Transportation (DOT) today fined American Airlines $1.6 million for violating the Department’s rule prohibiting long tarmac delays.  The airline was ordered to cease and desist from future similar violations. This fine represents the highest amount assessed against an airline for violating the tarmac delay rule, matching a similar $1.6 million fine assessed against Southwest Airlines in 2015.

“Our tarmac rule is meant to prevent passengers from being trapped in aircraft on the ground for hours on end,” said U.S. Transportation Secretary Anthony Foxx.  “We will continue to take enforcement action as necessary to ensure passengers are not kept delayed on the tarmac for lengthy periods of time.”

An investigation by DOT’s Aviation Enforcement office found that in 2013 and 2015, American Airlines allowed a number of domestic flights to remain on the tarmac for more than three hours without providing passengers an opportunity to deplane: 20 flights at Charlotte International Airport on February 16, 2013, six flights at Dallas/Fort Worth International Airport on February 27, 2015, and one flight at Shreveport Regional Airport in Louisiana on October 22, 2015.

Under DOT rules, U.S. airlines operating aircraft with 30 or more passenger seats are prohibited from allowing their domestic flights to remain on the tarmac for more than three hours without giving passengers an opportunity to leave the plane.  Exceptions to the time limits are allowed only for safety, security, or air traffic control-related reasons.  The rules also require airlines to provide adequate food and water, ensure that lavatories are working and, if necessary, provide medical attention to passengers during long tarmac delays.

The long tarmac delays in Charlotte occurred on flights operated by both American Airlines’ predecessor US Airways and its regional partners during a snowstorm.  The Department found that the carriers failed to properly assess the situation in time to take preventative measures to avoid long tarmac delays.

The Department also found that while heavy snow and rain contributed to the long tarmac delays in Dallas/Fort Worth, American did not adequately prepare for the weather and failed to take appropriate measures to prevent multiple extended tarmac delays at this airport.  The investigation further found that the long tarmac delay in Shreveport was at least partially due to the carrier’s mismanagement of personnel and resources.

Of the $1.6 million assessed for these violations, $602,000 will be credited to American for compensation provided to passengers on the affected flights, and $303,000 will be credited to American towards the carrier’s expended costs of acquiring, operating, and maintaining a surface management and surveillance system at Charlotte and Dallas-Fort Worth to monitor the location of each aircraft on the airfield.

Having airlines delay the departure for this long and trap passengers on the plane is simply unacceptable. By a 2-3 hour mark I’d probably cite medical reasons why I need to get off.

This is the entire consent order from the Department of Transportation issued to American Airlines.

Of course for a company such as American Airlines $1.6 Million is really a drop in the bucket. How many years were they able to violate the law to incur this fine? It’s pretty much a tiger without teeth even though it sounds a very large sum of money initially.

I’ve only once been in a long delay at JFK airport on board Cathay Pacific and thankfully I was in First Class so it didn’t concern me at all. Being in Economy and especially on a domestic flight operated by American Airlines would really be the epitome of suck.

I’m glad the D.O.T. is issuing these fines against offending airlines but as mentioned above I doubt the effectiveness of these fines unless they hammer the carriers with citations every single time the offenses occur.