Workers of ground service provider Swissport in the UK have voted to reject the latest deal on pay increases and threatened to strike for 48 hours on the upcoming Christmas weekend 23rd & 24th December. 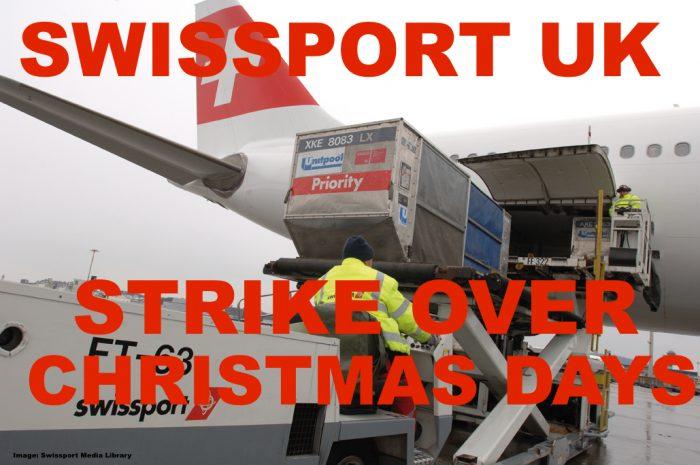 A strike would severely impact travel at 18 airports across the UK including London Heathrow where Swissport manages a variety of ground services from check-in to cargo handling.

At Heathrow this collides with another looming strike of 4000 British Airways cabin crew who also threatened to walk out on their job during the same period (LoyaltyLobby wrote about it here).

All this adds additional uncertainty and anxiety for passengers who plan to travel from or via the UK to various destinations during their holidays.

You can read more in a detailed article from The Guardian (access here).

Holiday flights could be disrupted by more industrial action as 1,500 baggage handlers, check-in staff and cargo crew working at 18 airports across the UK are set to strike over the Christmas weekend.

Members of the Unite union employed by Swissport, who work on behalf of airlines at airports including Stansted, Luton, Gatwick, Leeds-Bradford, Manchester, Cardiff, Belfast, Glasgow and Edinburgh, intend to walk out for 48 hours on 23 and 24 December. Cargo workers at Heathrow could also take action.

Birmingham, Southampton and Newcastle airports, whose check-in and baggage handling are entirely operated by Swissport, could be among the worst affected.

Swissports provides a wide variety of ground services, all of which have the potential to cause massive delays irrespective in what field the workers would strike. You can’t say just because ‘only group x (for example check-in workers) are striking’ it won’t be that serious. Airlines run in chain events and a disruption anywhere in the middle can impact the departure time or in some cases even cancellations.

Unite members voted by 62.5% to reject a three-year pay deal. The union said the offered barely keeps pace with inflation, while eroding terms and conditions, including freezing overtime payments. …

Of course airports can schedule workers for shifts that aren’t associated with the Unite workers union but that is hard if many different areas are affected and let’s not forget that these other workers like have confirmed holiday plans with family as well.

If you are still in the planning stages or have a flexible ticket such as a mileage reward booking it might be the best idea to avoid traveling through the UK altogether if you have a choice. Flying from/to destinations in Great Britain is likely going to be ok even though slight delays could be expected but transferring to other flights means double the risk to get stranded or at least severely inconvenienced over the holidays.

Especially in conjunction with the BA strike it’s double exposure that you neither need or want if you can avoid flying though Heathrow. As mentioned before, keep an eye out for your reservations during the holiday period and remember that airlines will have the obligation to rebook you onto different carriers even in case of a strike should one of your flights be cancelled or delayed causing you to miss your connection.