An Indian court ruled upon a complaint that airlines are expressively prohibited from discharging their human waste tanks mid air after repeated incidents of frozen excreta causing damages on the ground. 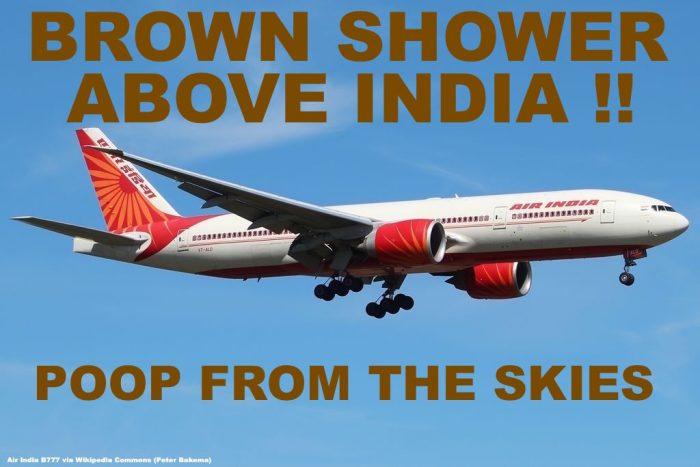 The most recent case involves a woman who claimed frozen human waste caused her a shoulder injury after she had the substance checked in a laboratory.

We have all heard the rumor before that airlines dump human waste in the air and it falls down on the ground while in reality the norm is that all of it is stored in tanks and disposed of properly during ground servicing of the aircraft. Or at least we thought (wished) that was the case. It seems like in India the opposite is the truth and multiple incidents are connected to airlines doing a big flush over urban areas.

Bloomberg (see here) reported over the court ruling in India that calls for regulators to take action.

An Indian green court ordered the country’s aviation safety regulator to ensure planes don’t dump human waste during flights, ruling on a plea by a New Delhi resident who claimed his neighborhood had to endure excreta that fell from the skies.

The Directorate General of Civil Aviation, the safety regulator, should conduct surprise checks on aircraft when they land to ensure their human-waste containers aren’t empty, a three-member panel headed by Swatanter Kumar, chairman of the National Green Tribunal said in an order.

Satwant Singh Dahiya, a resident near New Delhi’s airport, filed a case in October saying houses in his neighborhood were damaged by feces dumped by airlines at night. In another incident, a 60-year-old woman suffered a shoulder injury in December last year probably caused by human excreta falling from the skies, the Times of India newspaper reported.

Airlines will have to pay 50,000 rupees ($735) every time their human waste tanks are found empty on landing, and the DGCA must maintain a helpline to take complaints on falling excreta, the tribunal said.

Aircraft lavatories have tanks attached to them to store waste. These are emptied at airports by the ground crew on landing. However, some excreta can be discharged mid-air in case of a leakage due to technical faults. These are converted to ice at high altitude and fall off the plane’s surface.

The Central Pollution Control Board, a government body, could not ascertain whether a sample it tested was human or bird waste, although the court said chemicals present in the sample clearly indicated that it was human excreta.

The Original story which appeared in The Times of India (access here) depicts two men proudly holding the culprit of the womans shoulder injury with their bare hands: A frozen rock of poop! 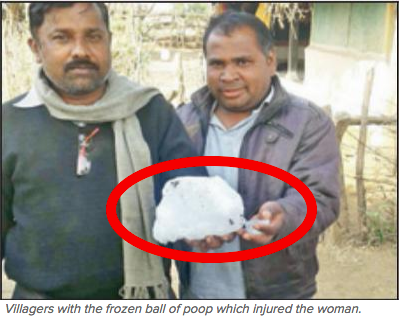 From what I see in the article there are multiple incidents like these attributed to damages on homes that would paint a clear picture that the discharge of human waste containers above these areas is more or less modus operandi for airlines frequenting that Indian airspace.

A truly disgusting situation. I was skeptical and still won’t buy this story 100% but let’s take it at face value and assume the lab testing was done with due diligence proving that this frozen something is really human waste… GROSS!

As if these areas weren’t dirty enough, now the airlines contribute to it all by letting it rain down on the poor residents living in Bhopal and Delhi (plus this is probably happening all over India, not just this particular area – why would it be limited to this part of the country?). Good that the regulators are trying to do something but given the situation of law enforcement in India I doubt anything will happen and the threat of a $750 fine won’t deter airlines who have to pay way more than that for proper disposal.