Delta Airlines made news the last few days after two passengers claimed they discriminated against for being Muslim and kicked off their flight but an unexpected twist revealed them as serial pranksters. 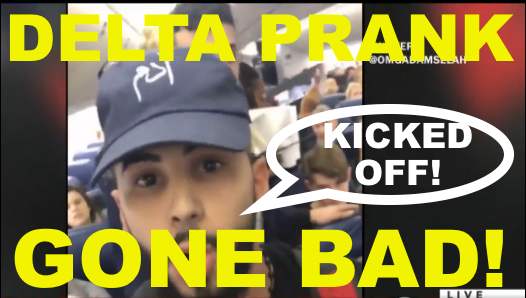 While the entire internet already went haywire throwing Delta under the bus via common social media channels, some people investigated the guys YouTube videos where he recorded similar incidents before.

With all these cases of bad behavior on the part of airline staff in recent years where completely innocent and harmless passengers were booted off flights it’s easy to jump to conclusions as soon as news break that some passenger complains about yet another case.

The way this particular scene was captured on camera from beginning to end with respective commentary looked way too prepared and not like a natural flow. The guy in question was traveling with a companion who also appeared to cheer him on while other passengers .

Short after this scene the guy named Adam Saleh tweeted out his endeavors:

You can see the entire video on his YouTube Channel below:

You can make up your own mind about this situation as you follow along, I don’t think it’s necessary to comment on it even further.

Meanwhile a reporter of The Guardian (see here) had a bit of a background story about Adam Saleh:

If the allegation of being thrown off a plane for speaking Arabic is true, then Saleh is right to be outraged. We must all be outraged at such blatant bigotry. But pardon me for being skeptical.

First of all, this is the same guy who released a video in 2014 titled “Racial Profiling Experiment”, which showed the NYPD as flat-footedly anti-Muslim and was later revealed to be a hoax, doing no favors for those of us in the battle against real racial profiling. …

And Saleh’s story of airline harassment rings true because airlines do have a troubled history of removing passengers merely for speaking Arabic.

It is precisely because Islamophobia exists that it can be exploited for either private reasons or public gain. And while our due diligence is required to assess each instance, we must also remain focused on the real issue here.

The point here is that he is doing a real disservice to those who are in fact being discriminated against in daily life, not only as customers of airlines but anywhere from schools to supermarkets, renting an apartment or applying for a job.

Delta in the meanwhile has issued a statement of their own which you can access here.

Upon landing the crew was debriefed and multiple passenger statements collected. Based on the information collected to date, it appears the customers who were removed sought to disrupt the cabin with provocative behavior, including shouting. This type of conduct is not welcome on any Delta flight. While one, according to media reports, is a known prankster who was video recorded and encouraged by his traveling companion, what is paramount to Delta is the safety and comfort of our passengers and employees. It is clear these individuals sought to violate that priority.

There are really more than enough reasons and actual cases to call airlines out for discriminatory practices and bad behavior of their employees that it’s totally unnecessary to create such fake situations. I hope these guys will be banned from the airline.

It was reported that Saleh and his companion purchased one way Upper Class (Business Class) tickets on Virgin Atlantic back to the U.S. which must have come with a heavy price tag. Probably their YouTube revenue will balance out some of these expenses over time. What do you think about this case?