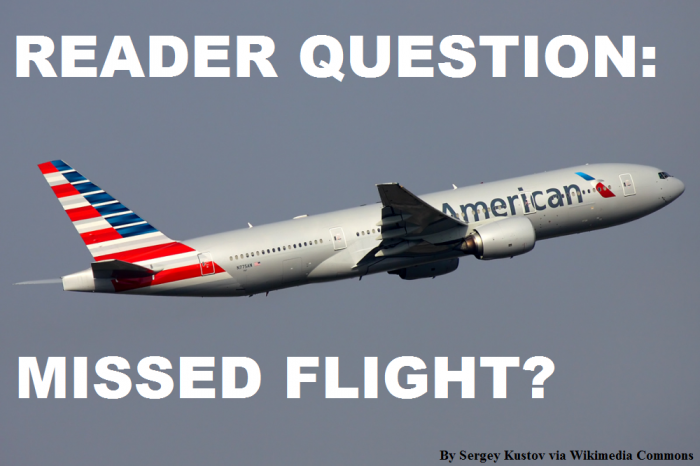 Hey John, maybe you can tell me how I can make the best of this issue… This is the email I sent through AA.com but just as a complaint, I can’t reach any other way, and it had a character limit, I’ll finish it here.

Here’s the complaint to AA:

Confirmation REMOVED 20 December 2016- your agent, Portia P made us late then denied us boarding PHL-MBJ because we were then late. All along chastising us, that is, myself and my 8 year old son. Then she partially looked for another flight  on AA only, via Charlotte, NC. I asked her to stop chastising us, she walked away- leaving us with no recourse.

I called American Express because they have a travel service and I am a platinum member, they put us on a Delta connection, it cost more than twice as much.  I can’t get a signal to call AA platinum elite to reach you, this is all I can do.

A nice AA agent named Francis booked us on the next available AA flight, standby, which is tomorrow. I am faced with not only the $4200 cost of the Delta tickets, but also the loss of $900 for the non-refundable tickets, but also $400 in change fees to not have a total loss.  I understood the rules but this is not fair because your agent caused us to be late.

How this happened: we arrived at 9am for a 10am flight, there was unusual traffic due to an accident. I had tried on December 19 to check in online, but the AAC.com site said there was a problem that I needed to check in at the airport, so we had to go to the ticket counter where 4 AA agents were standing chatting to each other.

I went directly to them and said I am platinum elite and my son is gold elite, out flight leaves in an hour, can you help us? Portia P said “you should have come earlier…” As she went on I said I was aware of that but could she tell me where we should check in for priority? She said there are counters all over the airport.

We went to a business class lane, and waited. I asked an agent if we were waiting in the right place, she didn’t answer. I asked for a supervisor, she said one was coming. We continued to wait. About 10 minutes later we had our turn and that agent said it was too late. It was something like 913am. Then the supervisor showed up, it was the same Portia P. I asked her for help and she continued to tell us how we were at fault, my son started getting upset. He has Aspergers.

Another of the chatting agents came to Portia to let her know another family was showing up late for the same flight, he said to her “I want you to tell them the same thing, they can’t get on the flight.” Portia was intermittently looking for another way to get us to MBJ, but only on AA, and the only options were to stay over in Charlotte or fly tomorrow nonstop. She said she got us through Charlotte, I said I don’t want to sleep in Charlotte.  She said, in the same continuous chastising tone, I TOLD YOU YOU WERENT LISTENING TO ME- and so on , I saw my son starting to get upset and asked Portia to please just help us find a flight, and Portia “dropped the mike”. She just turned away and said something like well I am not going to help you at all.” She left us at the counter with our bags and my son crying.

I called American Express, and while I was talking to them, Francis, an agent for a nearby counter, came to help us as much as he could. The connection via Charlotte was some sort of late night connection, like arrive at midnight in Charlotte and leave at 5am … Something like that.  meanwhile the Amex agent found us the last 2 first class seats PHLMBJ via ATLANTA, for $2100 each. Our coach American tickets were $420 each, and to change them will cost $200 each.

Francis kindly put us on standby for tomorrow’s 8am nonstop, giving me a little breathing room to figure out what I am going to do. I write to you now from the gate in PHL, waiting for our flight to Atlanta.

Pay to change the flights to a future date, and even so, if I don’t know the right date, I guess I’d have to pay $200 again to change them again, that’s the same as the cost of the tickets.

No show the standby, complain to my credit card company (it’s a Marriott Chase card, and I am platinum for life with Marriott).  They usually help me but since I paid for the replacement ticket with Amex, had to, because I needed their travel service.  I don’t have a smartphone capable of booking flights and such, I was stuck.

If American would just let me use the value of the tickets for future flights, like a voucher, I’d be happy with that.

One more twist, tomorrow I will be in Jamaica, it’s difficult and expensive for me to be making calls until I get back to the US on Jan 3, 2017.

When complaining to an airline or hotel it is utmost important to be as concise and clear as possible. Main points should be differentiated using bullet points.

Seems that from the email above that the passengers arrived to the airport late. It is irrelevant to the airline what the reason for the delay is. US airlines often have “flat tire” rules in place where late passengers are accommodated on later flights on standby basis.

The passengers couldn’t check in online. They should have proceeded to the Platinum check in and not to the service desk.

Airlines often have clear cut off times. If the flight is closed 60 minutes before scheduled departure time and you show up at the desk 59 minutes before, you are basically lost. Many airlines outside of the United States have rules in place that there is no value left on non-refundable tickets if you don’t show up to your flight.

There is no point trying to do a chargeback on the American Airlines tickets if they were not at fault as it appears to be from the email above.

American Airlines offered to rebook the passengers on the connecting service requiring an overnight in Charlotte or on direct service the following morning.

Buying an alternative ticket on Delta is probably a wise move if passengers really have to be in Jamaica on the same date and cannot arrive day late on American Airlines service. It is unclear what the fare rules are on the first class Delta tickets. They could be refundable or then not.

It is unfortunate to miss flights around the holidays when the planes are mostly full and everyone could be stressed (both the pax and the employees).

It is also difficult to change flights in case of missing flights or airline caused delays. I missed a flight on Saturday last week and had to buy alternate one (read more here) using miles. I don’t blame Malaysia Airlines for me sleeping late.

I would have taken the AA’s offer via Charlotte and booked a night at some hotel near the airport or the direct one day later IF I could arrive day later to the Jamaica. Not sure if that was the case here.

I hope that the reader got to Jamaica and has been able to work with American Airlines to keep some credit live from the tickets purchased.