Starwood Preferred Guest (SPG) has launched a new promotion called New Member Exclusive for bonus Starpoints and perhaps for other awards as well. 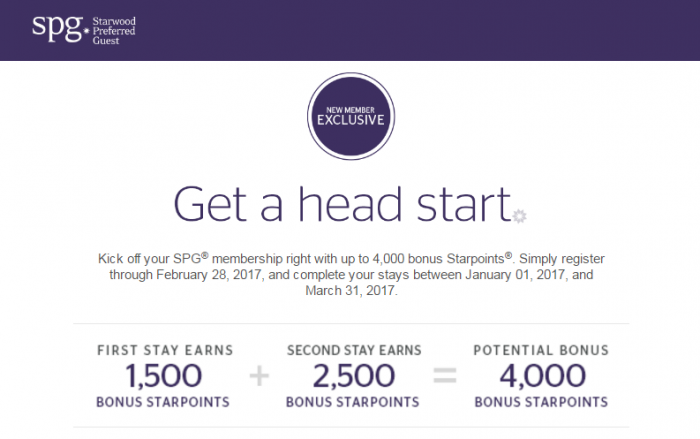 Here’s the offer that a reader had received:

I would assume that some members that linked their Marriott account to a newly opened SPG are targeted for this bonus opportunity.

As I pointed out above there are likely multiple offers out there. Please post your offer on the comments section below.

Here are the terms of the bonus Starpoints offer:

An eligible stay is a stay with at least 1 eligible paid night at any of the over 1,200 participating Starwood hotels and resorts paying an eligible paid rate during the promotion period. An eligible rate is any rate that is eligible to earn Starpoints in the Starwood Preferred Guest® program. Free Night Awards and Cash & Points Award nights are not eligible toward promotional Starpoints earnings. A listing of SPG-participating hotels and resorts and a description of eligible stays and eligible rates can be found at spg.com under the program terms and conditions. See Section 1.4 for the complete definition of eligible rates, but note that certain prepaid rooms where the booking is made through a third party are not eligible rates and do not earn Starpoints or qualify toward promotional earnings.

Bonus Starpoints will be credited to the member’s account within 2–4 weeks of the stay posting to the member’s Starwood Preferred Guest account following the first and second eligible stays.

Reader Question: Hilton MVP Rate – Too Good To be True?