Networking Etiquette When Traveling In Premium Cabins – How Much Is Too Much?

I came across a paid (placed) advertisement of ANA last night that highlighted how a ‘professional networker’ uses his flights in Business Class to find new connections or as I say ‘prey’. 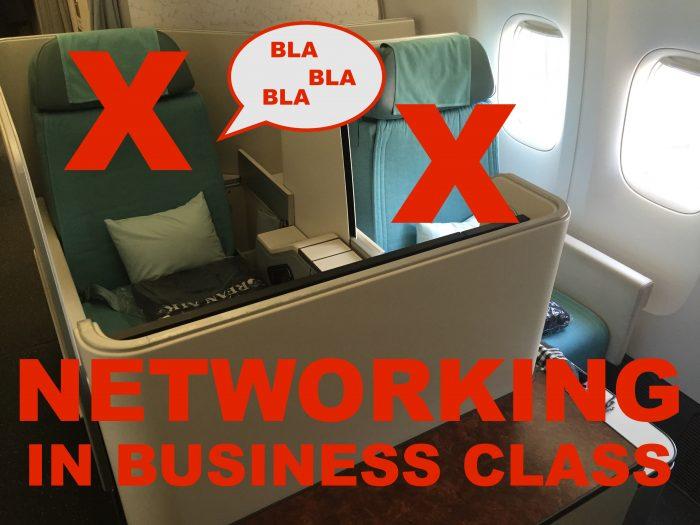 It struck me as slightly over the top how someone could try every angle available to him just to talk to people traveling in Business Class.

Usually when I travel I prefer to stick to myself and choose single seats whenever available. Maybe I’m the exception to the rule but I never observed people in premium cabins to be overly in the mood to communicate with other travelers in depth about their job and life.

You can find the ad which has been placed with CNBC here (the disclaimer says it’s paid for by ANA).

In-flight networking is a growing trend among the business set. How does traveling make it different from networking on terra firma? All Nippon Airways (ANA) invited Karl Chong – angel investor, co-founder of Groupon (Singapore) and a seasoned networker – to discern the differences. …

The best time for networking is the hour or two before the captain pilots you back to firm ground. The cabin lights are fully turned on and you’ve just finished a wonderful meal. People are awake and generally happy at this time. Case in point, my neighbor on the flight to Tokyo.

He was sound asleep most of the flight, no surprise considering that the business class seats fully recline to become a flat bed. It was only when we were descending that he was finally bright-eyed and bushy-tailed. I jumped at the opportunity to small talk. I casually remarked that he looked like he had a great sleep. That kick started a pleasant chat, and I quickly discovered he was a Greek commodities trader, traveling to Japan to see clients. …

The airport lounge is a natural networking hotspot. People of different nationalities from all walks of life congregate here. It’s where the weary traveler comes to find food, shower and rest – fertile hunting ground for the networker.

I stepped into the ANA Lounge at Haneda Airport just after 6 a.m. The lounge was relatively quiet at this time of day, so I was lucky that a fellow traveler decided to take the seat right next to me. The relaxing mood played to my advantage and I struck up a conversation with the man. He didn’t seem too keen on the small talk at first, but opened up once I shifted the topic to business. …

These are just a few examples the gentleman gives of how he ‘networks’ with fellow travelers. To me it sounds very much like he is pushing himself onto people and even has a game plan how to accomplish this. His strategy must work out for him somehow, the question is what do you get out of it?

For me, a large benefit of traveling in First and Business Class is that I’m able to relax and don’t actually have to interact and be courteous with people, which you can’t avoid to a certain degree when traveling in Economy Class. It would drive me nuts if I’d tip toe around the cabin the entire flight hunting for my next networking prey.

Maybe in reality the guy comes across much different than it’s portrayed in this article where it appears like somewhat creepy and uncomfortable.

Yes it’s good to have contacts and I also appreciate a nice chat with someone if the occasion arises that you get to talk to each other. Over the past 12 years, I met three people on planes who I became very good friends with to this day, it was purely a chance meeting and there was no specific intent from either of us when starting the conversation.

We’d like to know your opinion: Are you going out of your way to chat people up when flying Business Class or you prefer to keep to yourself? Leave some comments below!