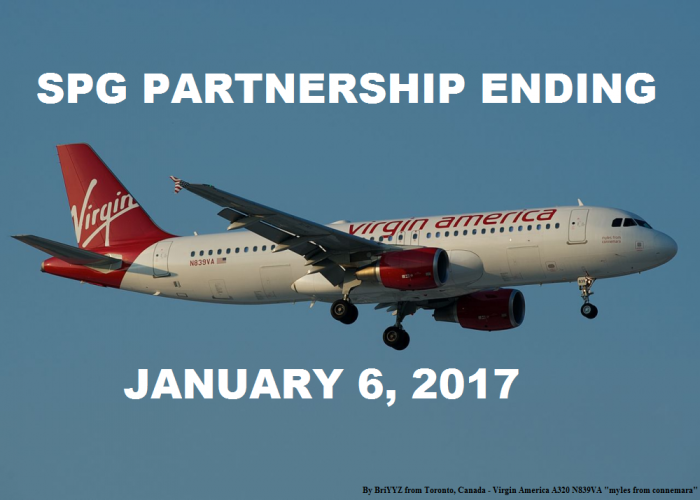 SPG made an announcement that their partnership with the Virgin America Elevate program will end on January 6, 2017. Members can continue converting Starpoints or credit their stays to Alaska’s program after this date.

You can access SPG’s web page for partnership programs here.

Here’s the info that SPG sent us:

SPG has a long-standing partnership with both Alaska Airlines and Virgin America, and was excited to hear the news about the official close of their merger. This presents a great opportunity for Elevate members to join and enjoy all the benefits of Alaska’s award-winning Mileage Plan starting January 9th.  Instead, SPG has decided to focus its partnership on Alaska Mileage Plan and end its partnership with Virgin America’s Elevate program. This means SPG members will no longer be able to earn Elevate points on hotel stays, or directly transfer Starpoints into Elevate accounts after January 6, 2017.

When Alaska announced the changes last week, it was buried in the information that the transfer ratio from Virgin America’s Elevate to Mileage Plan would be 1:1.3.

As both airlines are SPG’s transfer partners, one could first convert Starpoints to Virgin America and then move the Elevate points to Alaska. 20,000 Starpoints with the 5,000 bonus from SPG would become 32,500 Alaska miles via Virgin.

Quite a few people have used this as a way to get more bang for their Starpoints but I don’t believe that this conversion to Alaska via Virgin America make that much sense if one has enough Marriott Rewards or Starpoints to redeem for Travel Package redemptions (read more here).

90,000 Starpoints (270,000 Marriott Rewards points) gets you one week at a Marriott category 1 – 5 property and 120,000 miles with many of their partner airlines. Due to the Marriott and United Rewards Plus partnership the standard Mileage Plus transfer is 132,000 miles. Both United and American Airlines have offered bonuses (once or twice a year) for converting to their respective programs from hotel programs including Marriott.

I value both American and United miles higher than Alaska ones due to better ability to combine partners for awards (you cannot mix and match with Alaska) and routing options for worldwide travel. Alaska’s Mileage Plan plan may suit those well that only travel between North America and select international destinations, however.