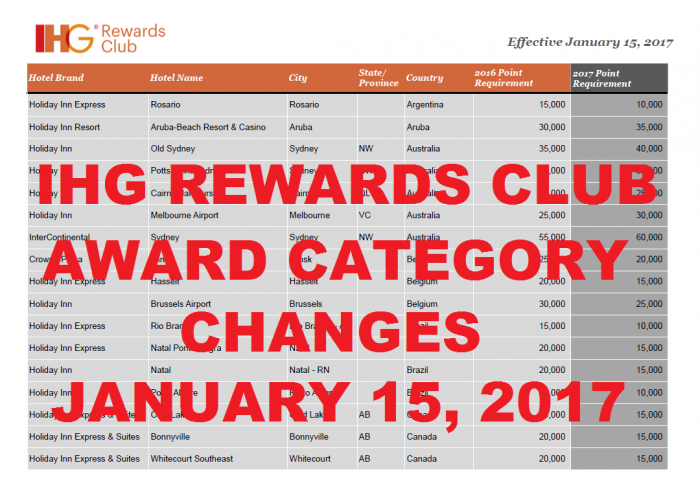 IHG Rewards Club has 488 properties moving a minimum of one award category (5,000 points) up while some move up to three (15,000 points). There are 161 hotels moving down in the number of points required for a free night.

Here’s the PDF released by IHG:

Number of Properties Moving Up: 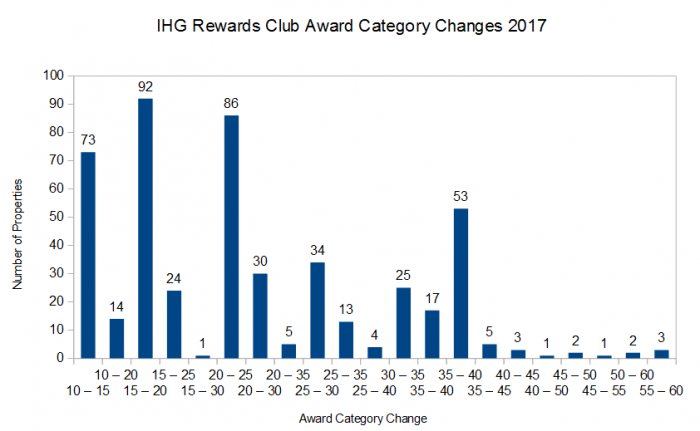 Number of Properties Moving Down:

Previously, IHG Rewards Club was promoting the fact that they had the same number of properties moving both up and down in the number of points required for awards. This time, however, the change (negative) is more lopsided. I would say in general that the properties that moved down are those that people rarely redeem for while those moving up tend to be one of the better deals using points.

Remember that while IHG Rewards Club makes significant changes to award categories only once a year, they do tend to move a few properties (those popular ones!) unannounced a few times a year as well.

There are now quite a few InterContinental hotels requiring 60,000 points per night (maximum currently). I wouldn’t be surprised if IHG Rewards Club announced new higher categories in 2018.

Let’s hope that PointBreaks stick around in 2017 and that they will have a bit stronger lineup than this year.

IHG has brought back the offer for double points at select new hotels in Greater China (mainland, Hong Kong, Macao...

IHG Rewards has launched a buy points Mystery Sale with an up to 100% bonus for purchases made through October...

A LoyaltyLobby reader sent us a question regarding the InterContinental Royal Ambassador renewals for 2022? Readers are encouraged to send...