After seeing more and more exotic ‘Emotional Support Animals‘ such as roosters, turkeys and pigs, U.S. transportation officials seem to be at the point where they are considering rewriting the rules. 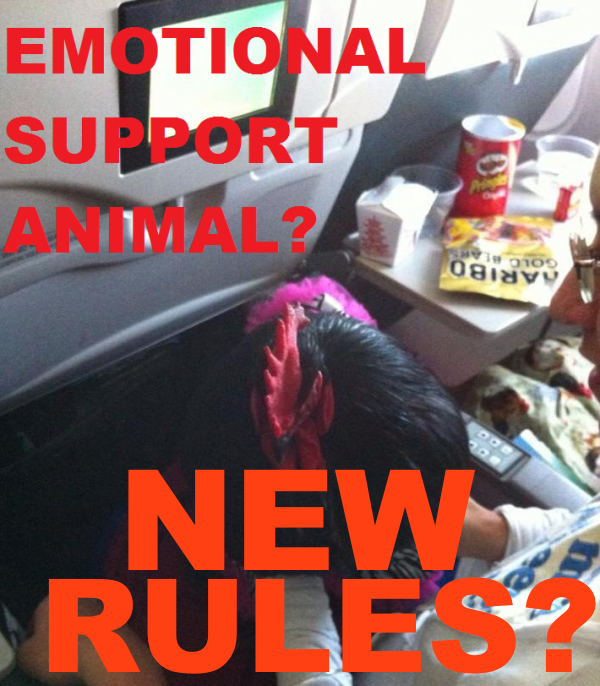 People increasingly use the regulation that was originally deigned to help those with a serious disability to ferry their exotic pets around free of charge, inconveniencing other travelers and making a mockery of the law.

On top of it all such fraudulent behavior does a huge disservice to the seriously ill and disabled as it puts all support animal owners under a blanket of suspicion.

John wrote an article about it some time ago when someone took the featured rooster on board (see here). Have Americans now pushed the envelope too far that authorities feel compelled to act?

There was an interesting article in the Detroit Free Press today (access here) about the topic.

With the holiday travel season now here, many air passengers are boarding the plane with service dogs and emotional support animals — a practice that critics say is open to fraud. …

How do airlines know whether these pets are true service animals and not impostors wearing an official-looking vest bought online for $39.99? The answer is, they don’t. Critics say many travelers claim their pets are service or emotional support animals because they don’t want to pay for them to travel.

While many of these animals are dogs, passengers have also gotten on board with birds, including a peacock, cats and other animals.

“I see more violations than legitimate use of service dogs in public. A drastic majority of what I’ve observed in airports is misuse of the service dog law,” said Brian Skewis, executive officer of the California State Board of Guide Dogs for the Blind. …

Like dogs, miniature horses can be trained to do work or perform tasks for people with disabilities, according to the ADA. They can be used as guides for blind people or to pull wheelchairs. These animals, which can be house-trained, typically range in height from 24 to 34 inches at the shoulder and weigh between 70 to 100 pounds. Businesses, nonprofits, government agencies and other entities covered by the ADA must modify their policies to permit miniature horses where reasonable.

A DOT spokesperson said the department is now considering rewriting the rules for service and emotional support animals on its own, but a timetable has not been set.

DOT said the rules would “address the concerns that have been raised with the department regarding the definition of a service animal” under federal law, and “instances of passengers falsely representing that their pets are service animals in order to avoid pet fees that airlines may charge for pets to travel in the aircraft cabin.”

DOT said U.S. carriers are required under the Air Carrier Access Act to transport all service and emotional support animals with a few exceptions, such as snakes, ferrets, rodents and spiders. Airlines must evaluate unusual animals such as the miniature horses, pigs and monkeys on a case-by-case basis. A single passenger can have two or more service animals.

Among the service and emotional support animals prohibited by Delta Air Lines, the largest carrier at Detroit Metro Airport, are hedgehogs and farm poultry such as chickens or turkeys.

Since when does Delta prohibit Turkeys? Roughly a year ago this was apparently permissible as this article shows I wrote back then when a lady took Mr. Gobble out for a ride. 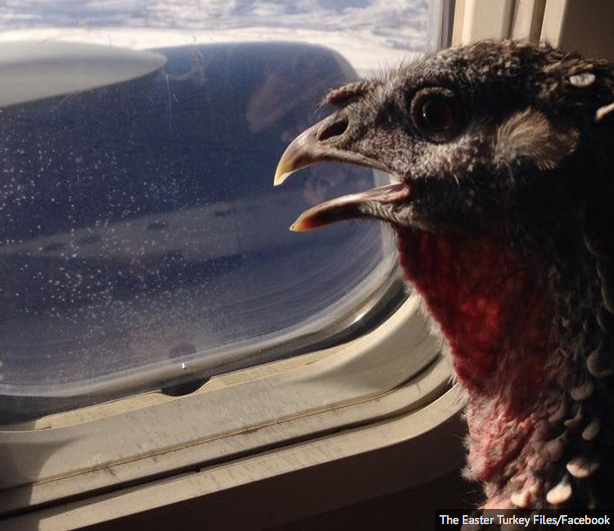 In any case, tightening regulations is overdue. The law is way too generous and has multiple loopholes that allows rampant fraud to be the normality rather than the exception.

This is a delicate problem that so far nobody was willing to tackle to avoid offending anyone. It’s a good thing that the U.S. makes special provisions for people with disabilities but they shot well above the target so to speak. Where is the public good being considered when someone is allowed to bring two or more farm animals onto an aircraft?

What about my rights and well being as a passenger who is being impacted by such a disgrace? Real service animals are well behaved and properly trained. They never bother a single soul. Can you say the same about a Rooster or Turkey? What do you guys think about this topic? Please share your comments below!