A LoyaltyLobby reader sent me a question that deals with award night issue that occasionally happens with number of chains. 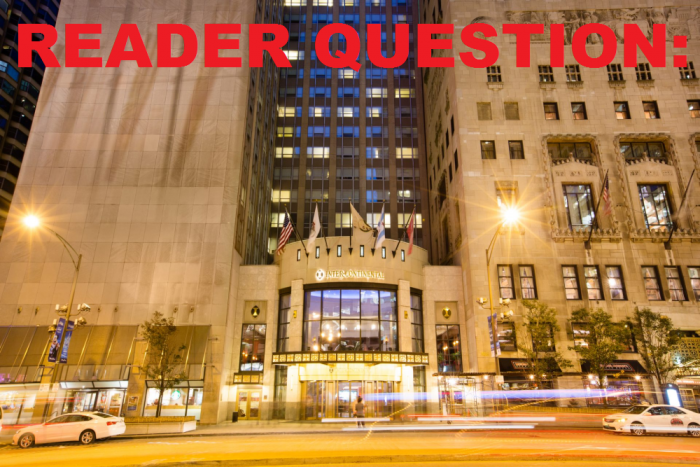 I have a question regarding a recent stay with incorrect billing at the Intercontinental Chicago Magnificent Mile.

I booked a one night stay using the “Share Forever Free Night” certificate online. The reservation clearly shows the room rate as “Free”, and the use of the certificate was acknowledged upon check-in.

In the morning, the hotel put an express check-out bill under to door – with a one night charge for the room on the bill. I spoke with the front desk in the morning, and they assured me that it was a mistake and handed me a corrected bill.

I checked out later in the day, and my cell received a notification of a charge for the room rate. I turned around to speak again with the front desk, who recognized the error and issued a refund. However, a refund will not show up immediately on the credit card (unlike the charge).

A few hours after checkout, I received a notification on my phone of another charge. My account showed that the hotel charged my card once again, adding even more to the amount that is blocked out on my card. The stay was credited as a reward night on the IHG website. I have a few questions:

1. Now that I have left the hotel, who do I contact to resolve the issue? I couldn’t find an email address online, and the ambassador line indicated that I need to contact the hotel directly. The accounting department hours are at an inconvenient time for me since I am now in Asia.

2. Is it appropriate to ask for compensation, given that the hotel has incorrectly charged my credit card a few times? This has caused me some problems given that I have charged a lot to my credit card during the US holiday season.

Your advice is appreciated! Note that I am an ambassador with the chain, and have spent 104 paid nights with the IHG brand in 2016.

When loyalty program member stays using points or has a free night certificate, the individual hotel charges certain amount to the loyalty program after the stay has been consumed. Sometimes (sloppy) hotel forgets to move this folio amount to a separate account (that is netted with the chain) and charges the guest’s credit card on file instead.

The front desk should have ensured that this amount had been charged to a correct account when the reader informed the front desk about the charge that appeared on the folio.

The problem with the IHG Rewards Club is that often nobody takes any ownership of the issue. They could have opened a case and forwarded it to the hotel to fix (meaning refunding the stay). I would open a case with IHG Rewards Club (call during US hours and ask to speak with Customer Relations) and also request 10,000 points for the inconvenience.

Other option is to Google the name of the General Manager of the hotel and then send the person an email. IHG’s email addresses always use the form firstname.lastname@ihg.com.

It is unfortunate when this happens and especially around the holidays when the hotel’s accounting department and management that deal issues such as these are likely on extended holidays.

There is really no excuse for the front desk agent incorrectly not to move the folio charge for the free room to the correct account after contacted by the guest.

There used to be far more billing issues in the past based on my personal experience than today. I believe that these accounting systems have become more foolproof when it comes to these award charges. You still have to pay attention to the charges posting to credit cards.