I have to admit I was pretty stunned when I checked in at the Grand Hyatt Shanghai yesterday and after returning to my room in the evening there was a small package on my desk containing a lost and found item from February 2016. 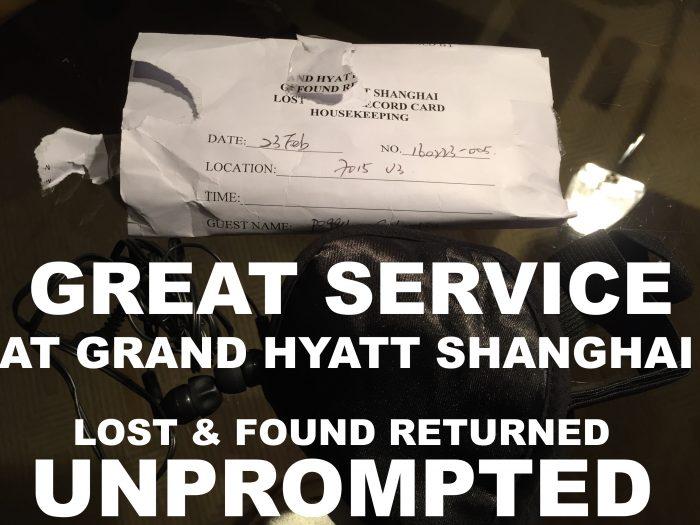 It was actually nothing valuable and I left it behind intentionally (some eyeshade from a Business Class amenity kit and low grade headphones from Economy Class).

Should have thrown it in the garbage really but I probably didn’t even see these items when I left the room however I didn’t plan on keeping them anymore.

Since I’m always one to name and flame hotels when things go wrong I thought it’s just fair to also point out when a hotel actually gets it right and exceeds expectations.

I wouldn’t have expected that something I left behind will show up without asking for it on my desk eleven months after my previous stay (February 2016). The Grand Hyatt Shanghai must keep a pretty good inventory/alert system and diligently upkeep internal guest profiles so if they come back things like preferences and in this case lost and found items can be considered.

In fact every time I stay at the GH Shanghai the Club Lounge staff points out when I’ve last visited and if there was a long period in between they discreetly ask if there was any reason for the long absence. That’s very smart in my opinion because approaching a guest proactively to see if something let him to stay with competitors or if he just didn’t come into town for this long creates a caring environment and the guest feels well looked after.

I stayed at three Hyatt properties in Shanghai this week: The Andaz Xintiandi where I received a nice and very spacious Corner XL room, the Park Hyatt over New Years Eve where the only upgrade was once again a Bund View room (the rooms themselves are pretty underwhelming) and the Grand Hyatt where rooms are a little dated in comparison to the other properties but have a comfortable feel to it and as a Diamond you always receive a spacious corner room per “Best Room Available” perk.

If a lounge is important to you I think that the Grand Hyatt Shanghai offers consistently one of the best evening spreads chain wide. Both quantity and quality wise. At the moment (January 2016) the actual Club is being renovated and the facility has been moved into a Presidential Suite of sorts on the 82nd floor. I was skeptical at first but shouldn’t have worried.

For now at least… we’ll see how all this works out next year when the infamous World of Hyatt begins. Hotels managers I talked to in the past two months are everything but thrilled.

As far as housekeeping goes one might argue that it depends a lot on how/if you leave a tip depending on where in the world you travel. I’d say that probably plays a role as well but more so in countries where tips in the service industry are generally expected.

I’ve left behind plenty of things in hotel rooms, more than I’d like to admit to myself and even though I’ve gotten some of them back this is the first time this happened without a specific request.

It became a really bad habit to leave things behind and I developed a routine to check hotel rooms thoroughly before I leave now. Mostly though you lose things when you are under time pressure such as you run late, overslept and have to get out of there. Anyway, good job Grand Hyatt SH!