A previous strike that was announced short before Christmas was called off in the eleventh hour, saving many travelers plenty of headache while being stranded over the holidays.

LoyaltyLobby wrote about the last strike action which ended up being cancelled here.

Strange enough apparently that wasn’t sufficient to get BA to even engage in talks about the demands which the flight attendants have, some of which include a pay raise after publishing the pay of some new hires barely (if at all) reaches subsistence level in a city that is known to be one of the most expensive in the world.

You can access the latest announcement of the UNITE union here.

… Unite cabin crew members working for British Airways ‘mixed fleet’ announced a 48-hour strike starting Tuesday 10 January today (Tuesday 3 January), after the airline refused to extend the mandate of the strike vote to allow for talks to resolve an ongoing dispute over ‘poverty pay’ to continue.

Warning British Airways of needlessly seeking conflict, Unite said its members were legally required to take industrial action within 28 days of voting for it, unless the airline agreed to an extension.

The move follows repeated attempts by Unite to hold meaningful talks with the airline after ‘mixed fleet’ cabin members voted to reject a pay offer negotiated at the conciliation service Acas, before Christmas. A two day stoppage scheduled for Christmas day and Boxing day was suspended to allow Unite members to vote on the offer.

Rather than engage in further talks following the offer’s rejection, Unite accused British Airways of instead seeking to unpick the progress made towards addressing ‘poverty pay’ during Acas talks.

According to communications seen by the union, British Airways initially informed cabin crew they could receive the original inferior pay deal this month if they declared they were not a member of a trade union. Subsequently this offer, which was rejected by 93 per cent of Unite members in ballot earlier in 2016, was extended to all ‘mixed fleet’ cabin crew. …

We will see if this time they will go through with that strike and make British Airways a bit more flexible for the negotiations.

As of now there are no news about possible scheduling implications of this vote and proposed action and I’m sure BA will update their customers in due time.

British Airways is obviously not interested in large pay raises but I think given the numbers published it’s inevitable to do so in the long run or people will simply quit. It’s really a sign of the times when a supposed ‘Premium Airline’ is paying their own employees, not leasing staff, such dumping wages.

If you fly BA in the coming week keep an eye out for published schedule updates and waivers issued by the airline should your flight or connection be affected.

Today’s Airfare of the Day goes to British Airways and their limited-time first class promotional round trip fares between London... 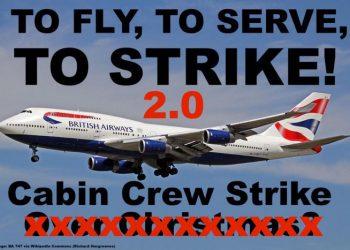