Over a dozen passengers as well as the drivers of colliding vehicles were injured on Friday when a passenger bus at Frankfurt Airport collided with a baggage transporter.

The bus subsequently rammed a barrier surrounding a construction site before it came to a halt and emergency services were able to respond to the accident.

Apart from the two driver one passenger was also severely injured with about a dozen passengers receiving smaller injuries. The bus had a total of 75 passengers on board when it collided with the transporter.

The German daily newspaper Berliner Morgenpost (see here) wrote about it in their online edition yesterday.

According to the news reports the bus transported passengers arriving from a Lufthansa flight ex Barcelona that received an apron position back to Terminal 1 when the accident happened.

The accident occurred around 8:40am close to gate A20 when the bus collided with a baggage transporter, injuring both drivers severely including the bus driver who had to be rescued from the vehicle by firefighters.

A passengers who was apparently on the bus published the following image on his Twitter showing the bus on top of a construction barrier. 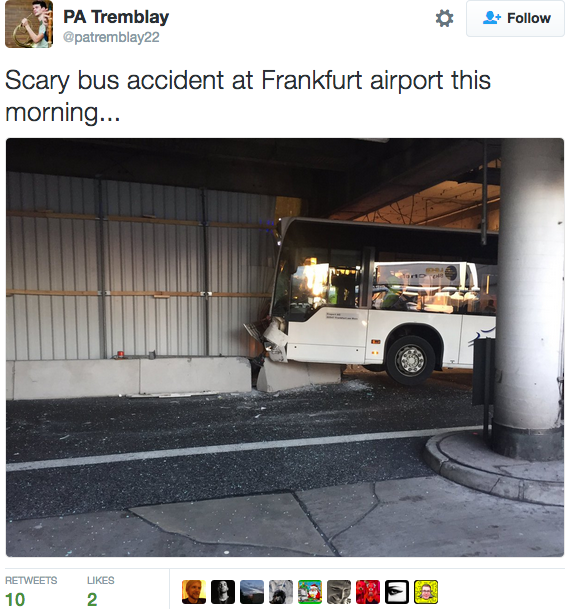 A FraPort spokesman said the cause of the accident was not the winter weather which started to grip Germany in the past few days. One could conclude that this means the cause was likely negligence on the part of at least one of the drivers.

FraPort said also that 40% of the flights in Frankfurt are being handled via apron positions and the airport operates 85 buses. The longest routes for apron position transfers are 10km long.

10 Kilometers distance to reach the terminal by bus is an insane distance and Frankfurt Airport has indeed grown into a monstrosity. I personally hate bus transfers to/from my flights, it’s an absolute nuisance especially with heavy carry on baggage and in severe weather conditions.

Even though three people are severely injured at least there were no casualties after this accident. Some of these bus drivers and apron vehicle operators have a crazy driving style and I think everybody who experienced a few of these bus transfers found himself bouncing around pretty good from time to time.

Nowadays I try to avoid Frankfurt Airport if I can because certain airlines such as British Airways almost always have apron positions and even home carrier Lufthansa (as in this case) isn’t immune against it.