A LoyaltyLobby reader sent me an email about theft that had happened at the Hampton Inn Cartagena reception while he had been checking in. 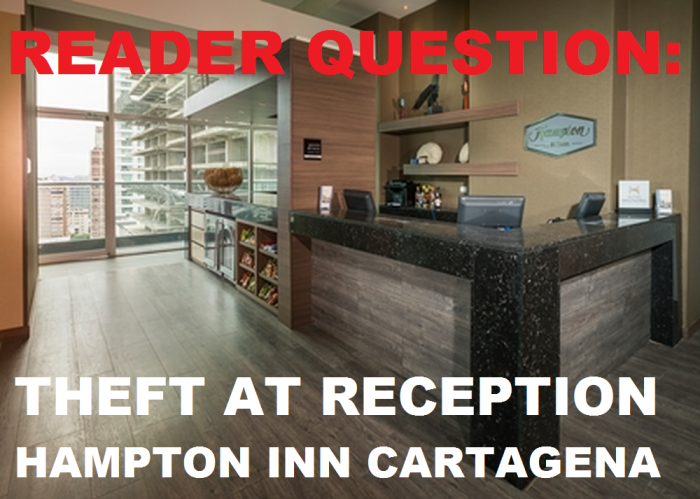 Here’s a rather peculiar story that happened to me last night. Getting into the Hampton at 9:00 PM local time in Cartagena and being quite tired from the day, I stood at the reception, leaned over the counter while checking in with all my luggage next to my feet, when out of 3 pieces my carry-on backpack with my laptop, camera + equipment, etc. was taken within seconds and a team of 3 professionals disappeared in the elevator.

As it turns out today from the video footage, it was a professional team. The 1st person, the picker, was known to the police, he had done it before, paid the fine, and was released. The 2nd person constantly called the elevator, and the 3rd person was distracting the receptionist + helping to act normal by inquiring about empty rooms. The hotel claims, that the reception area, though being in the 16th floor, counts as public area similar to airports. I do not agree! Having staid in many hotels as well, I always feel somewhat home and don’t expect criminals being inside “my home”.

Being a HHonors Platinum member, I would like to get your advice on if and how I should address Hilton’s customer service to ask for compensation. The total purchase value of the items stolen was $5,000-6,000. So far, I’ve only spoken to the hotel manager who says the hotel assumes no responsibility. However, she is helping with the cab to the police station, the police communication, and wants to report the incident to Hilton.

Is there anything I should or have to do to increase my chances?

This is really unfortunate situation and I have stayed a night at this very same hotel back in December 2015. I remember that the lobby was on a higher floor. Cannot remember if they had someone working in the ground floor too at the time.

Here’s what Hampton Inn Cartagena has on their website:

Hampton Inn promises 100% satisfaction but that only applies to the price of the room per the T&Cs.

I have no idea what the in-keeper laws are in Colombia. Most of the times hotels post on their websites and rooms that they don’t take any responsibility for anything left in rooms or even when safe is used (those can be opened easily).

The hotel must have some sort of general insurance that could cover theft too. I would pursue compensation with the management and, if it is not forthcoming considering that value of the stolen goods, would consult a local lawyer.

There is no harm opening a case with Hilton’s Guest Assistance and actively pursue the case through them. If the reader is not able to get any compensation from the property or if they are not communicating, that could lead to several Be My Guest certificates (just be sure that they are not limited to Hampton Inn properties only).

This really is a difficult case and I forwarded the reader’s email to our contact at the Hilton. Doesn’t mean that anything will come out of it.

I had a word with a friend that lives in Spain but is from Cartagena and who was in the city when this took place. His family don’t even walk outside but always uses a car due to the security issues. I didn’t feel insecure, however, when I was walking around the Hampton Inn and the historic city center.

It probably would be a good idea to have comprehensive travel insurance if someone travels with expensive computer and camera gear.

I often leave my stuff out when going to mens room when in hotel club lounge or airline one. If the lounge is busy, I may as someone to keep an eye on my stuff.

I wanted to post this to remind every reader to be aware of their surroundings wherever they are. I know for sure that I am sometime too lax about this. Don’t know what I would do if someone would steal my computer bag. Anything else, I wouldn’t care because clothes are easily replaceable.

Reader should also leave appropriate feedback with one or two star on TripAdvisor to warn other guests that are considering to stay at this hotel.