British Airways made an announcement back in September (read more here) that all complimentary catering including drinks would be removed from short-haul flights (some more than 4 hours) effective January 11, 2017.

British Airways made a deal with Marks & Spenser to supply the airline with products to sell including anything from sandwiches to chips (or crisps as they are called in the UK).

Note that cabin crew has been instructed to give potable water in cups for those that request it only after the paid service has been completed.

You can use Avios to pay for the purchase at unfavorable ratio. If you only have few or way too many, this can be sensible way to burn them.

Here are the items that you can purchase: 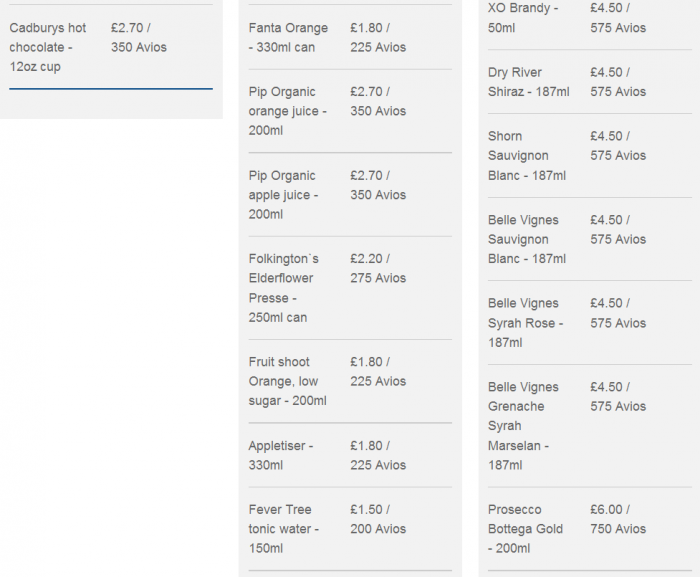 The roll out yesterday seems to have been chaotic based on press reports and Twitter rants. You can only use either credit cards or Avios to pay (no cash!) but many of the bulky credit card terminals didn’t work and they require either PIN or signature. Apparently British Airways haven’t heard about the touch and pay that Visa, Amex and Amex offer (would speed up the process!).

The crews had been given training about this initiative few months back and nothing ever since causing issues.

Many of the BA flights from London to Western Europe or especially those within UK are very short. Crews were not able to complete the service before they had to close the shop for arrival.

On other flights, the trolleys run out of the items after first few rows. You would think that the airline would have overstocked first before finding out the correct ratio for each of the routes?

Some of the planes are not able to fit both the duty free and Buy-On-Board carts. Passengers on those flights cannot purchase duty free items.

Overall, I would say based on the reports that I have seen the roll out could have been smoother by introducing it on certain routes first to find out potential issues and fixing them before launching it to all short-haul.

I guess that many of the passengers on shorter routes have used to pay for F&B. How this affect connecting traffic that feeds long-haul routes remains to be seen. Why would someone choose to fly on BA when they get nothing on the feeder sector when they could take full service airline such as Emirates, Etihad and Qatar with superior product especially if flying east.