FlightStats publishes the best/worst performing airlines based on on-time departures on an annual basis and they just came up with their list for 2016 that come with a few surprises. 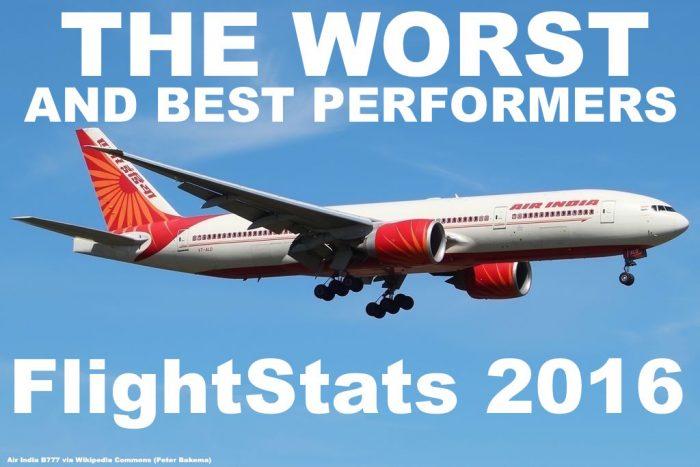 The worst performers actually stem from Asia and the Middle East including carriers that actually have a good reputation as far as their brand is concerned.

Typically those airlines that ended up with a very bad placement and have a very bad reputation to begin with such as Air India and Philippine Airlines ended up being blasted in the respective national press of their home countries.

You can read more about the FlightStats Annual Performance Award on their website here.

For an airline to be considered within an awards category certain requirements must be met. These requirements include the total annual scheduled passenger flights, the geographical nature of their route network and the degree to which FlightStats is able to acquire flight status data. The flight status coverage requirement is 90%, meaning that FlightStats has scheduled and actual gate arrival times on at least 90% of the scheduled flights for most categories. For the Major International Airline category, the coverage threshold was set at 85%. The coverage threshold used for Latin America was 80% while coverage for the Middle East & Africa was 85%. Winners and finalists within each category are listed below.

This year, we decided to expand the awards to recognize the best Major Global Airline and best Major Global Airline Network in each of the regional categories as well as the international category. “Network” is defined as a system of flights that are marketed by a major airline but are operated by a separate airline partner. Most big, full-service airlines have these types of regional partnerships where as many as 8-10 carriers operate flights on their behalf. …

Who came out on top? For the worldwide Ranking I was more than surprised to see KLM and Iberia under the Top 3 followed by Japan Airlines.

I say I’m surprised because especially Iberia operating out of Madrid has traditionally been a nightmare when it comes to on time operations and now 87% on time departure and 88% on time arrival performance. My personal experience pretty much mirrors that with 12% being maybe close to “on time”.

Alliances have a pretty small circle of competition between each other. In the coveted first spot for the most ‘On Time Alliance’ oneWorld was able to secure the first spot followed by Star Alliance and SkyTeam.

The North American Major Airlines category is comprised of the 12 major carriers in North America operating 9.1 million flights in 2016. This includes all flights within an airline’s network, mainline and regional. A tracking threshold of 90% was a requirement. Here, Alaska Airlines was able to secure the first place followed by Delta Air Lines and Westjet.

I had very good experiences with Alaska Airlines while flying up and down the west coast of North America, mostly between Los Angeles, Las Vegas, Seattle and Vancouver.

The European Major Airlines category is comprised of the top 10 major carriers in Europe operating nearly 2.3 million flights in 2016. A tracking threshold of 90% was a requirement. Surprising again that Iberia takes the top spot here as well with Vueling taking place 10/10 after a year with a horrible track record in operations. 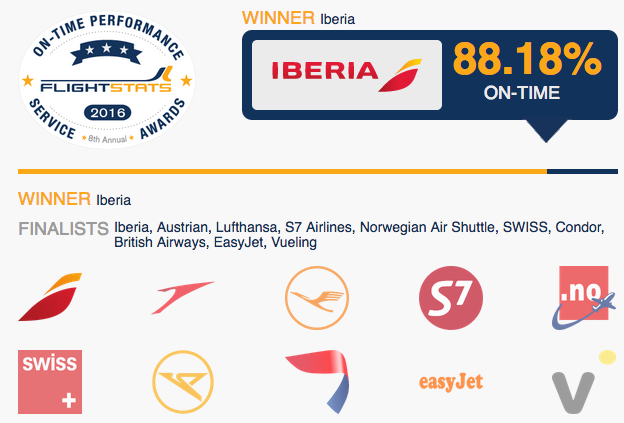 The European airlines didn’t have an easy year 2016 with plenty of strikes and other operational issues. When it comes to delays however it’s always good to keep in mind that under normal circumstances you can claim your EC261/2004 compensation for longer delays (not for weather/strike situations).

As for the overall bottom of the barrel these are the WORST airlines when it comes to on time performance:

Airports in China and South Korea (incheon) are choked with traffic and therefore it’s not surprising to see six out of the last ten spots going to airlines in this region. I guess Air India and PAL are just being their horrible self. I’m really surprised seeing Icelandair on this list but haven’t really flown them for like 10 years so can’t really say anything about their operations in Reykjavik. I guess this years FlightStats officially make El Al the Worst Airline in the World.

Keep in mind this is a ranking based on timely departures/arrivals only. It does not take into account factors of service, product, safety, customer ratings and pricing.

What FlightStats does is looking simply to the delays incurred and then ranks the airlines accordingly. That being said I’m still baffled about the Iberia ranking.