Although there has much press on various travel sites and blogs recently about United’s new Polaris premium cabin lounge to coincide with their newly redesigned business class seat, American Airlines has also been heavily involved in a huge makeover project for their top tier international lounges.

In the past, American had Flagship Lounges located at a few of their major hubs: New York (JFK), Chicago (ORD), Los Angeles (LAX), and London Heathrow (LHR).  These lounges have either recently gone through or are currently in the process of renovations, and American is also planning to open new Flagship lounges in Dallas (DFW), Miami (MIA) and Philadelphia (PHL).

In the interim, the Flagship Lounges are temporarily being rebranded as International First Class lounges. The remodeled lounge at JFK opened just a few weeks ago.  Access currently is limited to:

After the renovations are completed, American will rebrand these lounges as Flagship again (as opposed to the temporary name) and access to the lounges will be expanded to include international or transcontinental business class passengers, AA Platinum Pro (new 2017 tier) and Platinum members traveling in any class on a qualifying international flight, as well as non-AA oneworld Sapphire customers traveling in any class on any AA or oneworld flight.  AA will also introduce sit-down a la carte dining in addition to the buffet offerings. See here for more information about AA’s lounge update plans.

I was a bit confused at the access rules myself and wrongly assumed I would have access to this lounge, as I am an AA Executive Platinum member and was traveling in business class on a 3-cabin transcontinental flight from JFK to LAX. However, when I got to the lounge, I was told currently passengers can only access the regular Admirals club as a business class passenger; if I was traveling in first instead of business class I would have access to this lounge. However, I was also traveling internationally from LAX on a separate reservation the next day, so I showed the agent my itinerary and he reluctantly let me in.

Anyway, the lounge is a great improvement over the cramped and often overcrowded former JFK Flagship lounge.  The space is much bigger and divided into separate dining, lounging, working and rest areas.  Most chairs are also equipped with both US outlets and USB charging ports, and there are more private workstations with computers and monitors available as well. 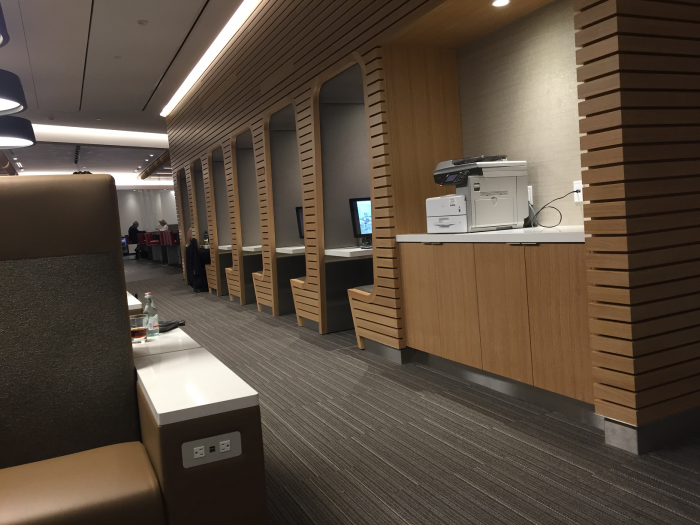 In the center of the lounge, there is a good sized wine bar with many different red, white and sparkling options.  It reminded me of some of the British Airways lounges I’ve visited.

There is also a self-service bar stocked with many premium brand liquors near the entrance to the main room of the lounge next to a buffet which featured a good variety of hot and cold items.  There was even a section of the bar with instructions and ingredients to “make your own old-fashioned cocktail”. 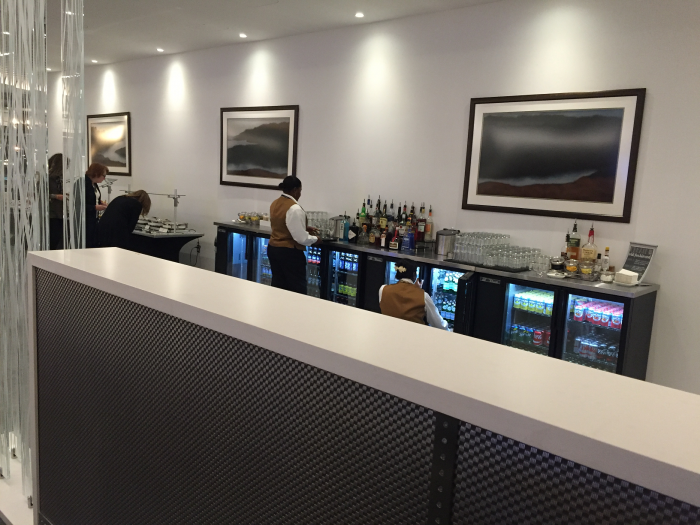 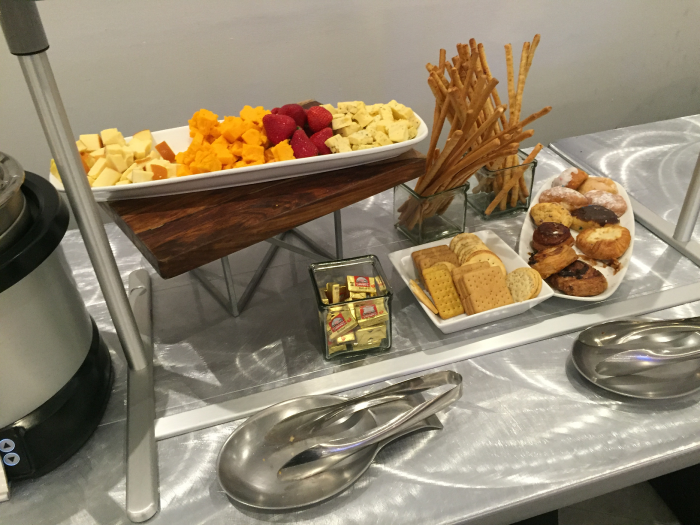 Although most of what I saw was positive, there were a few negative things.  In the bathroom there were neither hand dryers or towels, only boxes of facial tissues to dry your hands with, which I found a bit odd. Also, there was no espresso machine. I overheard another customer ask one of the attendants about that, and the response was that it was coming next month. Maybe it’s going to be an expensive high-tech espresso machine but you would think for a first class lounge they would at least have something temporary there for now.

Having previously visited the old JFK Flagship lounge several times, I was definitely impressed by the layout and food and drink options in the lounge.  I’m looking forward to seeing the renovated lounges at AA’s other hubs later this year.

I’m not necessarily in agreement though with the planned access rule changes.  One of my favorite benefits of being an EXP/oneworld Emerald member is having access to oneworld First Class lounges, including Cathay Pacific and Qantas, which are among some of the best in the world. I feel that if American opens access to their Flagship lounges to AA Platinum/oneworld Sapphire customers (which you can somewhat easily obtain through challenges or status matches), it might lead to more overcrowding of the lounges and potentially some cheapening of the experience to save costs.