Thai Airways hand made changes (increases) to the pricing structure of their popular standby upgrades which passengers can purchase for cash at the check-in, now taking the booking classes into account. 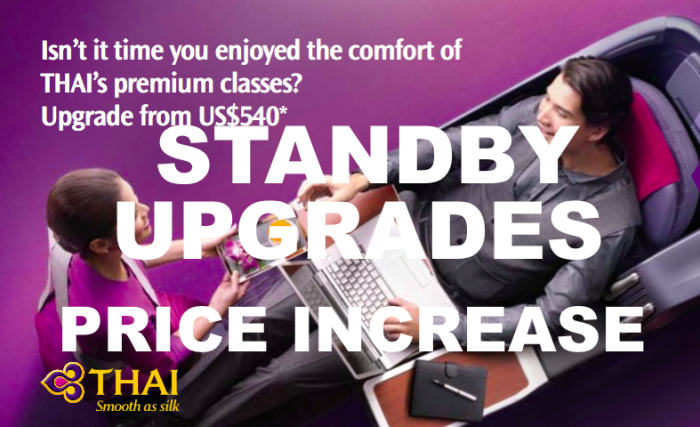 Previously Thai flat out quoted Economy to Business and Business to First with a fix price but now there are several levels of distinction between the Economy Class booking classes.

Using standby upgrades on Thai Airways has been pretty popular because the pricing was reasonable even from markets where TG round trip Business or First Class tickets are traditionally more expensive (such as Thailand itself when booking Thai Airways flights). I have been using these upgrades on occasion and know many people that frequently use them as well.

Here is the pricing as it was available until early this year (2017).

As you can see from the chart the prices are pretty reasonable as you were able to buy a relatively cheap Economy class ticket and upgrade that one to Business or even First Class. I know cases where this was possible even with mileage tickets. Thai often (not always) re-issued the tickets which then also earned miles for the new class of service.

Prices to/from BKK used to be flat for one class of service upgrade irrespective of the booking class:

among the remaining TG destinations which you can see in the chart. Since prices were quoted in USD the prices in foreign currency went up and down over the years, making the deal sometimes excellent value and sometimes just ok (as of right now, the USD is very strong at the moment).

Now Thai Airways has made changes effective January 5th 2017 that see the prices for these upgrades go up by sometimes ~ 60% which renders it pretty much useless in that particular case.

Thai has a specific landing page dealing with this matter on the Australia country page (access here).

The following charts have been published which outline the various changes in pricing.

For Business to First Class the rates are still very reasonable with no distinction between booking classes.

As you can see the prices are now quoted in local currency. They remained somewhat identical to the previous pricing with the exception of the Australia destinations which went up quite a bit from US$780 to now 1,832 AUD (US$1,370). It makes zero sense in my opinion to pay such a hefty price to upgrade from Business to First for these Australia destinations (BNE/MEL/SYD).

I would like to point out though that the upgrade rate ex Japan from Business to First remains phenomenal value with only 56,400 JPY (US$ 490) especially if you can catch one of the A380 departures ex Tokyo-Narita. These flights range between 6-7 hours effective flying time and even though there won’t be any caviar service on these flights, First Class makes a big difference in comfort.

Now we come to the point that affects most people and where Thai really tightened the screws, the Upgrades from Economy Class to Business Class.

For those who fly within Asia on full fare Y/B ticket some of these standby upgrades became a very good value, not to say a no brainer. There are some destinations that can be upgrades to Business Class for well under US$100 and that are up to 3 hour in flight duration. Singapore, Hanoi, Ho Chi Minh & Kuala Lumpur even for just US$40. Even the China destinations such as Beijing are being run at 650 CNY (US$95).South Korea, Taiwan and Japan destinations are also reasonable.

These prices are crazy low and it can make a big difference to travelers if they are able to book fares in flexible Economy Class. Even for leisure travelers it can make sense especially if booking a one way is the objective and those are often sold in flexible booking classes.

Once you make the step into lower booking classes however the fun is over and (at least from my perspective) it doesn’t make much sense anymore to go for standby upgrades, especially in the European longhaul destinations.

Airfares ex Australia are pretty high though it has gotten a bit more moderate in recent years and the upgrade fare even for saver fares can be ok if you want to splurge a little. Prices for these upgrades went up by only ~20% for SYD/MEL/BNE which I guess isn’t all that bad in the grand scheme of things.

It makes absolutely no sense anymore to use Standby Upgrades from Economy to Business to/from continental Europe. These prices are insane and given that they’re now quoted in local currency you can pretty much say they went up by close to 90% in the worst case.

There is an exception to the upgrades that isn’t included in the above charts, namely Scandinavia & Russia. 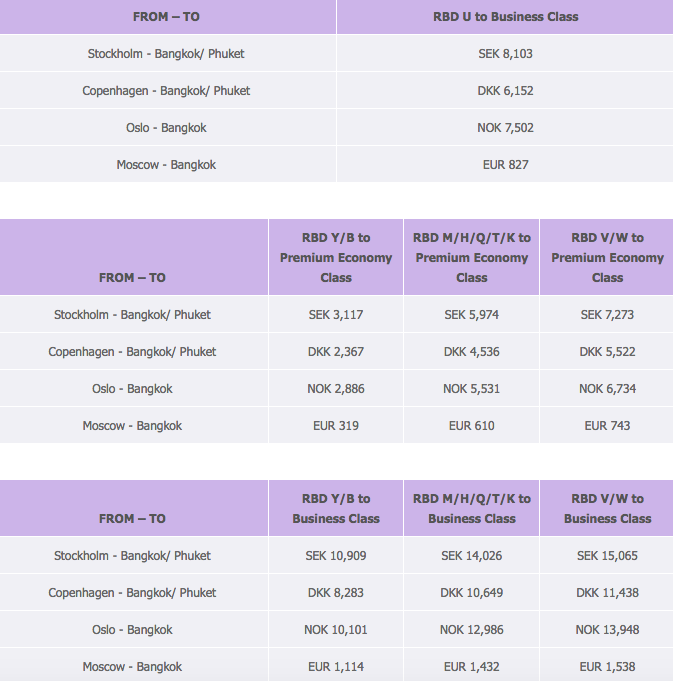 These destinations were always ‘special’ because their cabins were handled differently than the rest of the world. Thai used to fly to Scandinavia with their old 747 Aircraft that has an old Business Class which they sold as Premium Economy and their old 2-2 configured First Class which was sold as Business Class on these routes.

I thought Thai discontinued this practice and got rid of all their ill equipped aircraft (which might very well be) but then it’s a bit strange why they are still keeping Russia and Scandinavia in a separate chart. Either way the pricing is completely off the charts for these regions and it makes zero sense to upgrade at such rates.

Keep in mind that these Standby Upgrades only make sense in limited situations, such as

I have done cash upgrades in the past and sometimes still do when the price is right. Most airlines however have now moved towards an online bidding process where passengers can bid via the Plusgrade or Optiontown software ahead of their flight and are then notified if their bid was accepted. If some at least in the case of the now more popular Plusgrade the ticket is actually reissued in the new class of service and you automatically collect miles for it as well.

The pricing varies depending on airline and route but I think it’s a cleaner process and also takes away the cash handling from the local stations. In the case of Thai Airways I have always gotten a proper receipt but if you’ve come around a little you know that certain destinations are well known for money going into the wrong pockets after you paid. As long as I got my upgrade in the end that isn’t really an issue for me but for the company it certainly should be.

These changes in Thai Airways upgrade process are both good and bad depending in what camp you’re in. If you’re a business traveler who travels a lot on flexible Y/B or Business Class fares then not much will change and in some cases you have a real bargain at hand.

Bargain Economy Class travelers who were previously able to game the system a little and ended up with decent Business Class fares certainly see their modus operandi pretty much eliminated as the new rates for low end coach fares are rarely worth it. You are often able to find much better outright Business Class fares especially within Asia.

Why World Of Hyatt Milestone Bonuses Stop At 100 Nights?