North American carrier Delta Air Lines has reported a steep drop in their quarterly profits for the last part of 2016 which saw the profit margin dwindling by 37%. 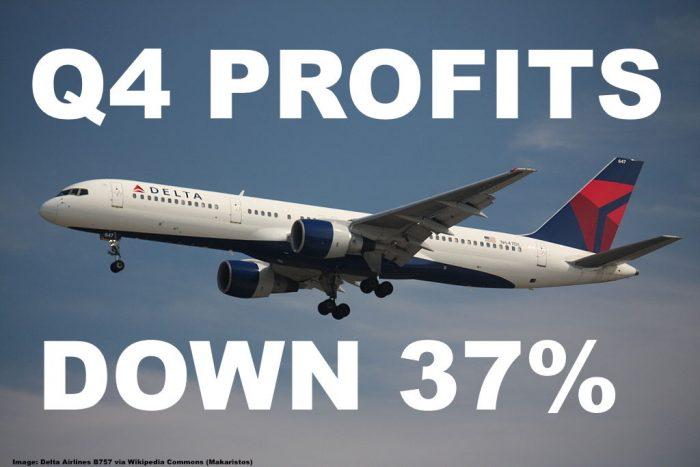 While still being significantly in the black, Delta blames the dramatic drop on expenditures related to a recent pay raise agreement with their pilots.

Delta has been a financially sound carrier for quite some time now while the competition of legacy carriers in the U.S. struggled a bit to produce healthy results.

Delta Air Lines on Thursday reported a 37 percent decline in fourth-quarter net profit and forecast passenger unit revenue, a closely watched metric, to be flat to up 2 percent in early 2017.

The No. 2 carrier by passenger traffic said net income fell to $622 million from $980 million a year earlier.

Excluding special items, earnings of 82 cents a share met the analysts’ average estimate, according to Thomson Reuters I/B/E/S.
Delta said the profit decline stemmed from the recent agreement it struck with its 13,000 pilots, granting them a 30 percent raise by 2019. The four-year deal, ratified on Dec. 1, is retroactive to Jan. 1, 2016.

Operating revenue fell to $9.46 billion from $9.50 billion, slightly above the analysts’ average estimate of $9.40 billion.

One has to keep in mind that US$622 million in profits is still very good for an airline in the U.S. market and everywhere else around the globe as well. And this after the 37% slump, which at least the carrier blames on the retroactive pay raise deal with their pilots.

Delta had good management in the recent past and started to produce healthy results under their CEO Richard Anderson who has since been replaced by Ed Bastian. To see in what shape Delta’s profits really are, we will have to wait for the Q1 results and make a comparison.

Much of their profits in the passenger sector stem not from ticket sales alone but also plenty of ancillary revenue such as baggage fees, last minute upgrades sales and other extras passengers can tag on to their basic airfare purchase.