Delta is re-shuffling their intra-Asia route network and in the process has decided to close down their Taipei route which they have operated since 2010. 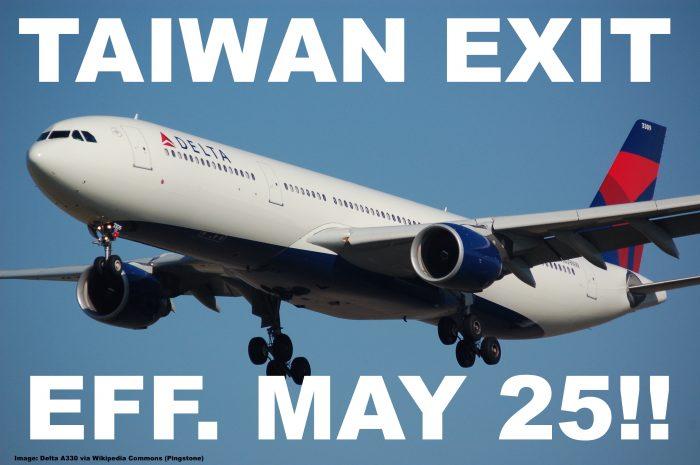 This is a blow to Delta customers going between Taiwan and the U.S. who as of now took the 5th Freedom Segment Taipei (TPE) to Tokyo-Narita before connecting to North America ( or vice versa).

Delta still operates quite a few routes within Asia including flights from Tokyo to Singapore and Shanghai (Bangkok was discontinued just recently) after most of the United has scrapped the majority of their intra Asia connections.

The Taipei Times reported on Delta’s withdrawal from Taiwan this week (see here).

US carrier Delta Air Lines yesterday said it would terminate all services to Taiwan effective May 25.

Delta currently operates one round-trip flight per day between Taiwan Taoyuan International Airport and Narita Airport in Tokyo, catering mostly to passengers traveling to and from the US via Japan.

The flight between Taoyuan and Narita on May 24 will be the last one on that route, the carrier said.

Delta said it plans to shift more flights to Tokyo Haneda Airport, but did not explain why that would mean closing the Taiwan route, which it has operated since 2010. …

The airline was seeking to rework its Asia network map to make it competitive with other large US carriers that were vying for dominance in the region, the Tribune said.

Delta has fewer connecting routes to other Asian destinations via Haneda, because it lacks partners with fortress hubs there, the report added.

Delta said passengers in Taiwan affected by its latest decision would be transferred to members of the SkyTeam Airline Alliance, which includes China Airlines Ltd (中華航空) and Korean Air Lines Co.

For Delta passengers it has been convenient to be able to fly on Delta metal all the way as it allowed them to use upgrade certificates for the entire way and also have a simplified transit in Tokyo. If someone now purchases a Delta Economy ticket to Taiwan or Bangkok for example he can fly up to Tokyo or Seoul in Business using an Upgrade Certificate but from there on it’s gonna be in Economy all the way to the final destination on a partner airline.

You were always able to buy these as 5th Freedom Flights at very favorable rates and it’s still possible to get good bargains on some of the flights such as HK-Singapore for $200 roundtrip (in the United case). The thing is that all these flights are designed to connect passengers to their U.S. bound flights so the times are often horrible, leaving extremely early in the morning.

I recently took the Delta flight from Shanghai Pudong to Tokyo-Narita though and the timing was pretty good. I was able to use some Delta Miles for Business Class at a very decent rate on this flight as well which is obviously operated by long haul equipment.

In the case of Taipei, SkyTeam partner China Airlines offers plenty of connections to/from Taiwan and I think the carrier offers a solid service. Their safety record also improved a lot (it used to be pretty dismal, especially during the 1990s).

To reach Taiwan, Delta passengers could choose to fly either via Tokyo, Seoul or Hong Kong for the easiest connection to Taipei. Keep in mind though that the connection via Hong Kong bears the risk of substantial delays due to the congested airspace and traffic condition at the airport itself. If you have a choice I’d avoid Hong Kong nowadays for connections and use alternative airports.

As far as switching flights to Tokyo-Haneda is concerned, there are both good and bad sides to it. For passengers joining/exiting these flights in Tokyo, Haneda is a more convenient choice. For transit passengers it makes little difference even though I find the lounge option with the fantastic Sky Club at Narita much superior compared to the facility Delta offers in Haneda.