One of our readers reached out to us after she was involuntarily downgraded from Business to Premium Economy Class while flying British Airways from London to Shanghai using AA Miles. 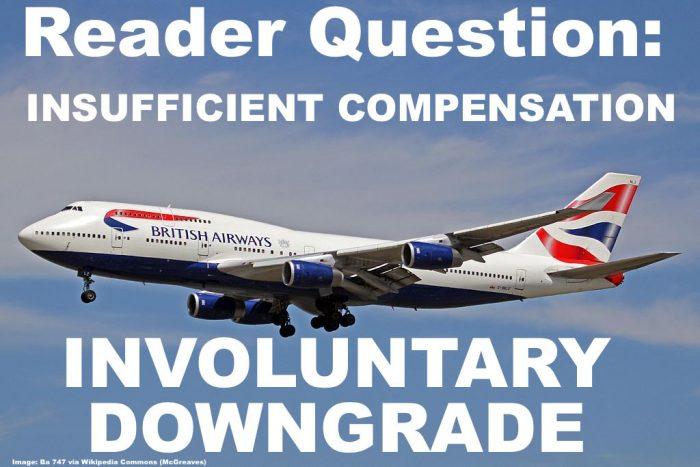 In this case it was about a pretty outrageous behavior on the side of British Airways in London Heathrow where our reader got downgraded to Premium Economy Class due to an oversold flight. She was traveling on an award ticket and only received a 200 GBP Compensation Card which can be used for purchases at stores.

Here is the letter from our reader:

On October 8, I was downgraded from business class (U) to premium economy (W) on BA161 (LHR to PVG). BA’s duty manager told me it was due to business class overbooked. The duty manager gave me a BA compensation card worth 200GBP (the card’s PIN is not readable, which means I cannot withdraw cash) and assured me that the card was only to show their apology and in no way a formal compensation. He described the compensation would be “fairly generous”.

It was an award ticket on Tegel Berlin-LHR-PVG I redeemed using my AA miles back in January when the business class between Europe and China only required 52,500 miles.

I wrote four times inquiring the situation using the specific customer service link. But instead, I only received one reply from them with no words on compensation. On November 23, after many attempts, I talked to a BA customer relations rep over the phone. He apologized for the long delay and told me that they would not be able to compensate me further since the ticket was purchased and issued by AA.

I also suspect that BA intentionally chose to downgrade passengers who held partner award tickets under these circumstances in order to reduce compensation costs, although I don’t have proof.

I have been sick of being kicked back and forth between BA and AA. And I don’t really know what I should do next. Please advise me on your opinions on this whole issue. Attached are the correspondences from BA and AA agents.

I appreciate you reading my long letter and any advice or help you will have for me.

There was a lot of correspondence to sift through but essentially it just reflected what the reader summarized very well, BA is profiling certain passengers in order to downgrade them.

I did not consider this compensation to be even remotely sufficient but since both British Airways and AAdvantage were stonewalling I suggested the reader to contact the regulating authorities in the UK.

… You can’t book PE with AA Miles and usually the operating carrier is required to compensate for downgrades. I can’t see how AA could calculate a fair refund amount in AAdvantage miles due to this and how in return BA would compensate them for this.

The compensation due to you is definitely higher than 200 GBP in cash equivalent or voucher.

I suggest you file your case with that office and see what they say.

Last week our reader emailed me back with the good news that the matter has now been resolved with the help of the CEDR.

I followed your advice to submit my complaint to CEDR, who accepted my case after review. In the complaint, I asked for a cash compensation calculated based on the average price differences between premium economy and business class of the specific flight during the same period of this year. BA responded with a defense, repeating that partial refund of miles has been processed by AA and offered nothing new.

I wrote a response to BA’s defense and laid out the reasons I have given to BA. It seems that on the same day, BA asked AA to issue a proportional of the differences in award miles requirement before and after the chart change. Today, BA posted their response, confirming the action. The total refund, 15,873 (the original refund by AA) plus 25,502 (the added refund), is a little more than the current difference between economy and business (35k and 75k) on the current AA Asia 2-Europe chart.

There is no refund of fees and charges. But I am going to accept the compensation.

Here is how the refund showed up on her AAdvantage Account:

With the refund of 41,375 AAdvantage Miles for this situation plus 200 GBP Cash Card the reader got out of this with a blue eye but only after much stress and fighting towards a correct and fair compensation.

She initially paid 52,500 GBP plus 300$ in taxes and fees (horrible Fuel Surcharge on BA) for the one way in Business Class. After all is said and done now you can conclude that she got an entire refund except 11,000 Miles. Not a bad outcome considering she still flew the trip on a somewhat decent product but definitely not a desirable situation considering the aggravation and effort involved to get to this point.

Could this have been avoided in any way? Well the reader could have refused the downgrade and insisted on flying Business Class, even on a different flight or a day later. BA would still be liable for EC261/2004 compensation and if the passenger incurs a long delay due to this then they’re also on the hook for 600 EUR. But this isn’t always practical depending on the flexibility of the passenger and the willingness to push the airline.

Keep in mind under normal circumstances, would this have been a revenue ticket BA would have been liable to pay a lot of cash money to the passenger based on EC261/2004 regulations. It’s in their interest to look out for non-status award passengers who are then left high and dry when it comes to compensating them.

More often then not airlines first prey on unsuspecting passengers to literally screw them over, meaning to deny them proper compensation for an oversell based involuntary downgrade. These things happen but there are airlines like Lufthansa who issue compensation vouchers for this on the spot and you see this amount black on white, even when flying on award tickets. I’d never agree to have this resolved at a later point and have them downgrade me without proper documentation in hand.

There was no mention if she had status but based on her name I’d also suggest that British Airways staff singled out Chinese travelers on award tickets. It’s common for airlines to try and find ethnic passengers who they suspect put up very little of a fight often due to communication barriers. This doesn’t always work for them as you really can’t base this decision on someones name. Not only is it plain wrong but I know plenty of people with a Chinese name who’d have ripped this BA agent a new one.