The Century Plaza hotel in Los Angeles that was long known as a Westin and most recently as a Hyatt will reopen in 2018 under the Fairmont brand. 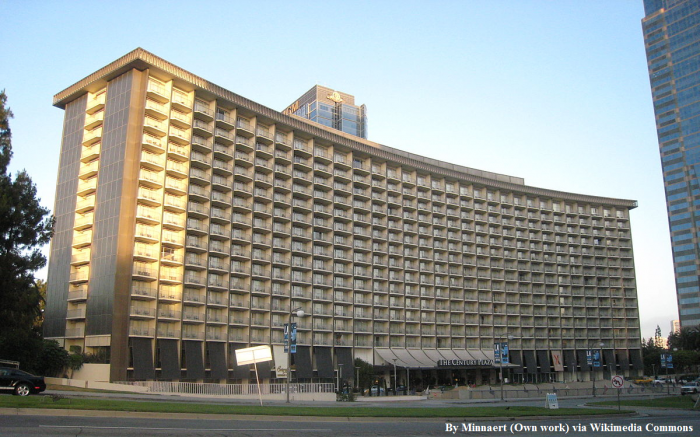 This is quite a “historic” hotel in Los Angeles considering that it is right to the Fox lot and has housed many dignitaries and US presidents since its opening.

Here’s the press release from Fairmont:

Cherished Century City landmark in the midst of a $2.5 billion redevelopment project will reopen in 2018

Luxury hotel operator Fairmont Hotels & Resorts, now part of the AccorHotels Group, and Next Century Associates today announced the signing of definitive agreements for the revitalization and management of the historic Century Plaza Hotel, located in the heart of Century City in Los Angeles. The iconic, crescent shaped hotel has hosted generations of Hollywood celebrities, foreign dignitaries and every United States President since its opening in 1966. The hotel is currently undergoing a meticulous restoration and is slated to re-open as Fairmont Century Plaza, Los Angeles in 2018.

The addition of a landmark hotel in a strategic US market supports AccorHotels’ goal of brand growth and expansion, particularly in the luxury space. The signing of this project follows AccorHotels’ 2016 acquisition of Fairmont Hotels & Resorts, along with sister brands Raffles and Swissôtel, which broadened the company’s luxury hotel offerings and footprint in North America.

“Fairmont is honored to become the manager of the historic Century Plaza, and along with Michael Rosenfeld and the entire team at Next Century Associates, we look forward to the rebirth of this iconic property,” said Kevin Frid, chief operating officer, North & Central America, AccorHotels. “The Fairmont brand was born in California in 1907 and now, after more than a century of building an international portfolio of award-winning properties, we are thrilled to return to our roots and expand our presence in the Southern California region. Fairmont Century Plaza is an important project, not just for the city and region, but for our globally-recognized brand as well.”

Originally designed by Minoru Yamasaki, Fairmont Century Plaza will be transformed by world-renowned architecture firms Pei Cobb Freed, Gensler and Marmol Radzinger and the internationally acclaimed design group Yabu Pushelberg. The team will revision the hotel’s renowned lobby, connecting it to a series of public plazas and fountains with two-acres of open space and gardens, surrounded by restaurants and retail boutiques.

The beloved Los Angeles landmark resides on a six acre site within one of the most prominent neighborhoods in the world. Built on the former backlot of 20th Century Fox Studios, the hotel faces the famous fountains at the intersection of Avenue of the Stars and Constellation Boulevard. The property is surrounded by over 10 million square feet of class ‘A’ offices, residences, restaurants, retail, and entertainment venues, and is adjacent to Beverly Hills, one of the highest grossing retail areas in the United States.

Fairmont is expanding its strong partnership with Woodridge Capital Partners, a Los Angeles based multi-disciplined real estate development and investment company. The two companies have enjoyed success together at Fairmont San Francisco and Fairmont Orchid in Hawaii.

“We are excited to make history in Los Angeles with the rebirth of the Fairmont Century Plaza,” said Michael Rosenfeld, CEO of Woodridge Capital Partners. “Woodridge and Fairmont have built a strong relationship over the years, with properties that have performed at the highest level in their respective markets. We look forward to establishing a new level of luxury for residents and visitors of Los Angeles to cherish and enjoy.”

“Our team is also very excited that Fairmont is now part of AccorHotels as this adds tremendous value on a number of fronts,” added Rosenfeld. “Fairmont Century Plaza will now have the ability to tap into an increased loyalty base and wider distribution network, and through this larger stage we will be in an extraordinary positon to showcase the hotel to even more luxury travelers in the United States and abroad.”

“California is in our DNA,” added Frid. “The quintessential Californian traits – the sense of relaxed glamor, charisma and sophistication – are exactly what guests consistently encounter at the heart of every Fairmont property around the world. We cannot wait to open these doors in Los Angeles, to celebrate the lineage of this West Coast landmark, and to welcome our guests with authentic red carpet treatment at what will soon be, the breathtaking Fairmont Century Plaza.”

With more than 70 hotels worldwide, Fairmont continues to expand globally with recent openings including Fairmont Quasar Istanbul, Fairmont Chengdu in Western China and Fairmont Fujairah in the Middle East. New luxury hotels scheduled to open later in 2017 include Fairmont Amman in Jordan and Fairmont Riyadh in Saudi Arabia. Fairmont will also open the newest, largest and most state-of-the-art hotel in Austin, TX later this year.

Fairmont Hotels & Resorts is a luxury brand that consistently rates among the best in the world in customer-based rankings such as the TripAdvisor awards, as well as industry and media awards such as the AAA Five Diamond Ratings, the Condé Nast Traveler Gold List, and Travel + Leisure’s 500 World’s Best Hotels.

I have stayed at this hotel several times when it was associated with Hyatt. I don’t believe that I have ever stayed there when it was under the Westin flag.

It is a bit ironic that the InterContinental hotel just down the street started its life first as JW Marriott and later became a Park Hyatt. Just proves how often these properties change their operators.

Let’s see how successful Fairmont is running this hotel come 2018.

Reader Question: What Program(s) To Consider In Addition To Hyatt Diamond?

Welcome to our weekly video review on hotel suites and rooms around the world! This week’s edition features the Gold...

Select Fairmont hotels in Canada are going to have 24-hour long Canada Day Sale on July 1 for stays through...

Fairmont has launched a new campaign for stays in North America through the end of 2020 (check property-specific blackout dates)....