Big news coming from Etihad today as news became public that President and Chief Executive Officer of Etihad Aviation Group James Hogan will step down in the second half of 2017. 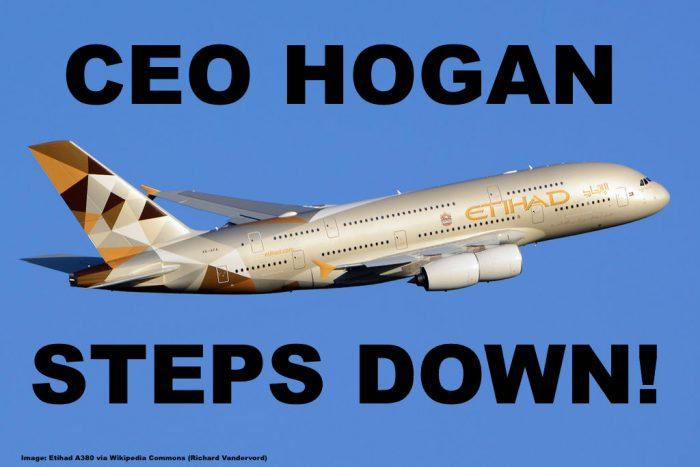 Hogan has spent more than a decade at the Abu Dhabi based carrier, transforming it from a small regional airline into a global player.

Over the last year and especially recent months, there has been speculation about Mr. Hogan’s future with Etihad after the carrier incurred massive losses through their investments in Alitalia and Air Berlin.

Etihad Aviation Group President and CEO James Hogan is to step down in the second half of this year, the company has announced.

Hogan, along with the CFO James Rigney, are both to join an investment firm, as the airline giant begins the global search for a new CEO.

Hogan’s departure, the company said, is part of a transition process first initiated in May last year when the Etihad Aviation Group was formed after a corporate restructuring process. …

Hogan took the helm of Etihad Airways in 2006, with a mandate to develop a safe, best-in-class airline, operating on a sustainable commercial basis and contributing to the future economic success of Abu Dhabi. …

Commenting on Hogan’s time at Etihad, HE Mohamed Mubarak Fadhel Al Mazrouei, chairman of the board of the Etihad Aviation Group said: “We are very grateful to James. In just ten years, he has overseen the growth of the company from a 22 plane regional carrier into a 120 aircraft global airline and aviation group, with seven airline equity partnerships which together serve more than 120 million guests every year.

“It is a business which has set new benchmarks for service and innovation. Under his leadership, the company has provided new opportunities for thousands of Emiratis and has been a critical element in the remarkable progress of Abu Dhabi and the UAE. We look forward to James’ continued association with Abu Dhabi in new ways.”

Indeed the airline has grown from basically nothing into a global player over the past decade. One has to realize though that the carrier had unlimited resources at it’s disposal to continue and sustain their growth up until now.

Etihad has poured roughly US$ 2.5 Billion into their experiment with Air Berlin and Alitalia to access European markets and it likely didn’t turn out the way Etihad management expected it.

Last week there were rumors that Etihad would consider a deeper involvement with Lufthansa and that the two carriers are already in negotiations about this. Etihad continues to deny such plans.

“We can confirm that are not looking to take a financial stake in Lufthansa,” the spokesman said, after the Wall Street Journal quoted Etihad Aviation Group CEO James Hogan as saying he was interested in a closer partnership but not buying shares.

Spending more than a decade as the CEO is a long time nowadays, and the fact that Mr. Hogan is leaving at this time is widely seen as making a cut after all these (failed?) acquisitions and steer the company in a new direction. Hogan will also take his CFO along with him to join an unnamed Investment/Private Equity firm where they will undoubtedly do very well financially.

This sounds like a very graceful and smooth exit from the company which is certainly the preferred way as long as everybody is still in good spirit. It’ll be interesting to see who will be Hogan’s successor as the CEO of the entire Etihad aviation group.

If you look at the corporate profile (see here) you see a wide range of foreign executives including Peter Baumgartner as CEO of Etihad Airways, who could be a logical choice to step up unless the patriarchs of the company have different plans. The corporation lists seven members of the royal family sitting on the board of directors, and undoubtedly those are the figures that make all decisions anyway.