Jet engine manufacturer Rolls Royce is currently engulfed in a bribery scandal that involves several airlines in emerging markets such as India, Indonesia and Thailand in order to boost the sale of their jet engines. 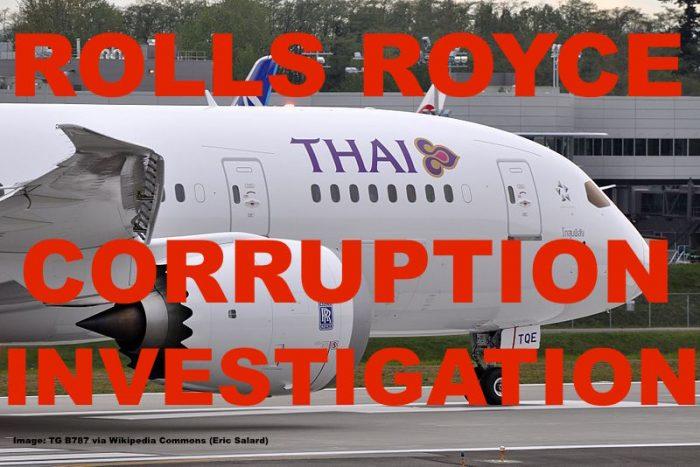 Investigations by the UK Serious Fraud Office have uncovered widespread misconduct and the company has admitted wrongdoing and gave detailed accounts where such payments were directed to.

These detailed accounts by Rolls Royce have raised eyebrows and in many cases triggered individual investigation in multiple countries where the bribery occurred.

The matter was initially reported by the Financial Times (access here) among others following the statement by the Serious Fraud Office.

Rolls-Royce on Tuesday said it “apologised unreservedly” for corrupt conduct uncovered in what the UK Serious Fraud Office declared was its largest investigation.

Senior judge Sir Brian Leveson said in London’s High Court he would approve a deferred prosecution agreement between Rolls-Royce and the SFO, under which the engineering group will pay £497.2m, a record British fine for criminal conduct by a company. …

Some of the alleged wrongdoing by Rolls-Royce focuses on bribes paid to intermediaries who were used to try to secure contracts to sell the company’s jet engines to airlines in emerging markets. Sir Edward Garnier, lawyer for the SFO, said the agency’s investigation had uncovered offences that had caused “substantial harm to the integrity of the market”.

The company had paid bribes to middlemen, including $2.25m and a Rolls-Royce luxury car for the sale of its Trent 700 jet engines to Garuda, Indonesia’s national airline, added Mr Whittam. …

Rolls-Royce had also failed to prevent bribery in relation to the extension of a £5m cash credit to China Eastern Airlines for the purchase of the company’s Trent 700 engines, as well as arranging for the Chinese carrier’s employees to attend a two-week MBA course complete with four-star accommodation and “lavish extracurricular activities”, said Mr Whittam.

Previous reports and accounts allege that Rolls Royce also bribed many other company representatives and officials in countries such as Malaysia and Thailand where carriers Air Asia and Thai Airways are key players.

In regards to Thailand there was also a related article in the Bangkok Post short after these revelations broke (see here).

… The case involved admitted bribery in Thailand, but authorities said no Thai complaint was filed, and no details were forthcoming.

But BBC reported on Wednesday that in the Thailand case, Rolls-Royce agreed to pay $18.8 million (663.3 million baht) to “regional intermediaries”. The term refers to local companies that handle sales, distribution and maintenance in countries where the British firm does not have enough people on the ground.

Some of the money was for individuals who were “agents of the State of Thailand and employees of Thai Airways”, it quoted the UK’s Serious Fraud Office (SFO) as saying.

These agents “were expected to act in Rolls-Royce’s favour with respect to a purchase by Thai Airways of T800 engines”, a BBC report said.

The statement Rolls Royce gave was not very well received by Thai Airways to say it in mild terms. The company released a statement (see here) saying the airline only engages in clean business practices.

THAI statement on Rolls-Royce’s admittance to bribery in Thailand

Thai Airways International Public Company Limited (THAI) stated that in the case of Rolls-Royce having admitted to the Serious Fraud Office (SFO) of the United Kingdom on allegations of bribery in a number of countries including Thailand from 1991-2005, THAI confirms the company conducts all its businesses in a transparent manner and without exception to corruption.

THAI assures that the company will promptly request and gather information from all the sources in order to investigate the matter thoroughly.  When all facts have been compiled and reviewed in detail, THAI shall expedite in determining the appropriate actions to take on any corruption found.

This is of course an utter joke. Anyone familiar with Thailand as a whole and Thai Airways specifically laughs at this statement as both the country and the company are a corruption heaven.

I know several people who are employed in different department of the airline  and frequently talk about how corrupt the company is in terms of hiring practices, procurement and other areas. It goes without saying that this is a country- or even region-wide issue and in no way limited to Thai Airways alone.

That being said these European companies aren’t any better if they pick up on it and engage in unsafe, illegitimate business practices.

On one hand I’m surprised that in such a small market segment like jet engines where the suppliers are rather limited and customer would likely choose between Rolls Royce and General Electric either way such massive bribery is daily business.

Rolls Royce is a company that is known for quality and integrity when it comes to their products, manufacturing some of the worlds best engines and products. Is it really necessary to pimp sales and potentially tarnish the brand by such methods?

I wouldn’t expect much of these investigations in the named development countries. In most cases money flows into the right pockets and the probe will likely stall in the early stages of the investigation.