Airlines worldwide but especially from the Middle East are scrambling to change their crew rosters after the new U.S. entry regulations restrict certain passport holders and foreign born employees from working. 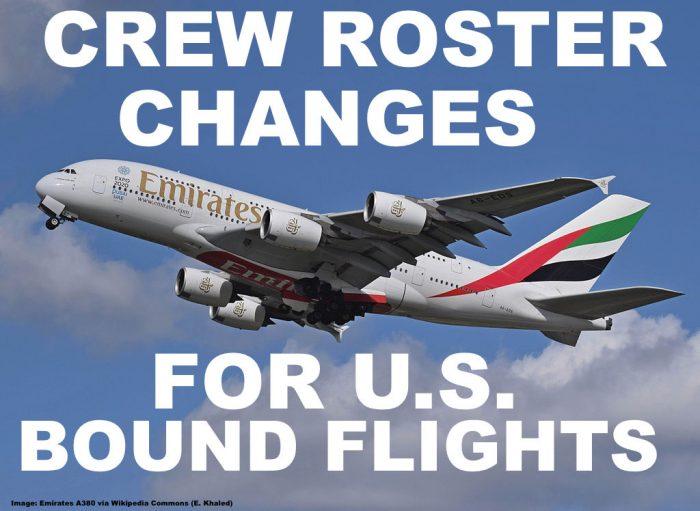 The new regulations that have drawn sharp criticism had an unforeseen but immediate affect not only on travelers but also on airline employees such as pilots and cabin crew.

Airlines all over the world naturally have crews with diverse backgrounds and citizenship, and even though some of them hold the same passport as the carrier’s home country that is not always the case, especially with the Middle East carriers which mostly recruit from other countries including those who made it on the U.S. restricted list per the most recent Executive Order (we wrote about this matter here).

The world’s largest long-haul carrier, which flies daily to 11 U.S. cities, has made “the necessary adjustments to our crewing, to comply with the latest requirements,” an Emirates spokeswoman told Reuters by email on Sunday. She added U.S. flights continue to operate to schedule.

President Donald Trump on Friday suspended the entry of people from Iran, Iraq, Libya, Somalia, Sudan, Syria and Yemen. The decision caught airlines off guard, according to the International Air Transport Association.

“I cannot think of anything comparable. This brings a mix of administrative confusion, impact and uncertainty for many travelers as well as practical operational headaches and complexities for airlines in planning their flight programs,” independent aviation consultant John Strickland told Reuters.

The implications for airlines are indeed complicated as not only do the restrictions apply to citizens of restricted nations as listed but also those who are born in these countries but hold a different nationality  which is very common.

I have a friend whose parents were Australian diplomats but he was born in Tehran which is also listed as such in his passport. The stories he tells… believe me, you don’t want to be him!

Airlines usually have a very good crew inventory system that allows them to make sure no problems arise with their crew at immigration points anywhere in the world. Nevertheless, it’s additional work and that on a very short notice.

I firmly believe we haven’t seen the end of this and can very well imagine that there will be adjustments to the current regulations, probably not for the better depending on what side of the fence you’re on (no pun intended).

Japan’s Foreign Residents Can Finally Travel In & Out Of The...

IHG Loses 103 Hotels In North America To Sonesta After Defaulting...