Another Reader Question and yet another Involuntary Downgrade case this time involving a flight from Melbourne to Abu Dhabi operated by Etihad that was sold to our reader as an Air Berlin code share flight. 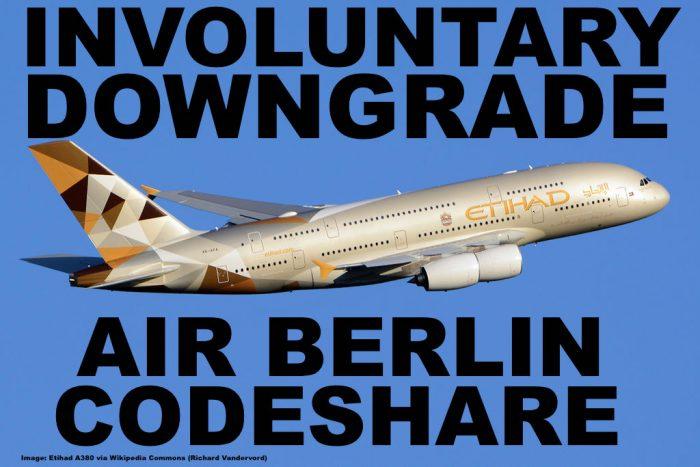 At the airport the passenger was confronted with the information from Etihad that his booking didn’t show to be in Business Class on the MEL-AUH segment despite having a printed confirmation in Business.

After reviewing the what the reader sent us it appears that there was a lot of confusion in terms of who actually fouled up that reservation.

This is the correspondence:

A few weeks back I have been downgraded on my Etihad leg of my AirBerlin flight in an outrageous way. The booking from Berlin to Melbourne contained the following itinerary in Business Class:

When I tried to check in flight AB4055 operated by Etihad under EY461 the agent told me that he cannot see a business class booking in his system, only economy. Showing him my booking confirmation made him trust me, but still he was not able to change anything in his system. He apologized quite a few times and convinced me that he is doing his best to get the booking corrected. He tried to reach Air Berlin staff via phone but could not reach anyone.

Since I am an AirBerlin TopBonus Gold member, I called the gold hotline and the AirBerlin staff changed the booking in Germany and helped the Etihad agent to fix the booking back to Business. The call from Australia to Germany was around 150 Euro. I received my boarding passes, boarded and took up my seat in Business.

What then happened was very upsetting… After a few minutes the flight attendant told me that there was a problem and I had to go back to the check in counter to check in again! I went back and the same Etihad agent apologized again and again and told me that he just received another call from AirBerlin telling him that I have to be downgraded and handed me over my Economy boarding pass.

I could not work on the flight, spend 150€ on the phone, didn’t receive miles and lost 4 hours of my life discussing with Etihad and AirBerlin staff. Obviously, I filed a complaint and received the following answer from AirBerlin: Claims are to be directed to the operating airline, no matter who my contract partner was in the first place. But they would be happy to see me on board soon. …

When I read this, more than one alarm bell going off. This sounds rather fishy and more like foul play than anything else ,but due to lack of further details it’s really hard to say what Etihad did there or if Air Berlin indeed messed around with the booking.

First of all, the reader submitted us the booking confirmation for his flights, showing all Air Berlin code share flights in Business Class. 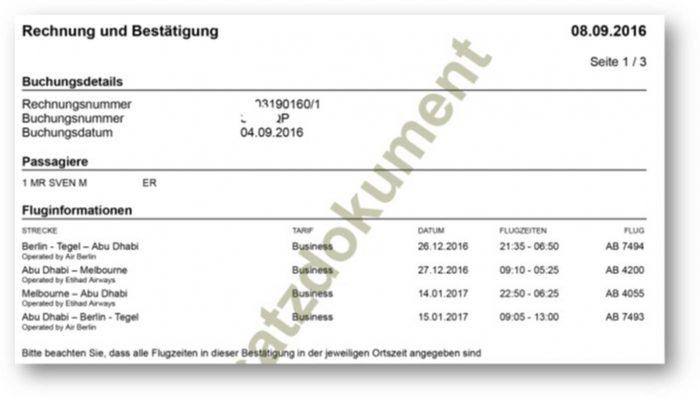 So based on the reader’s account what happened was:

Tell me what you want, but especially this last part is completely detached from reality. Air Berlin calls an Agent in Australia at the gate to inform (without reasons given) about a downgrade of a ticket that has been fixed just moments ago? Laughable!

I’d love to know how full the flight was that day and if there were potential VIPs/staff traveling on standby tickets that waited to slip into the reader’s seat after he had received the downgrade.

From my experience with situations like these, it sounds like Etihad pulled a fast one on the passenger, bumping him off his seat to use it for someone else. Either due to an oversell situation or be,cause the station/flight manager has ‘personal friends’ or VIPs to take care of. Even though I consider Etihad a somewhat well run airline, I wouldn’t put such a thing past them depending on who wants that seat.

Of course there is the slight chance that Air Berlin indeed made a mistake with the booking but then the reader would have hopefully provided us with a more detailed account of what they actually said. 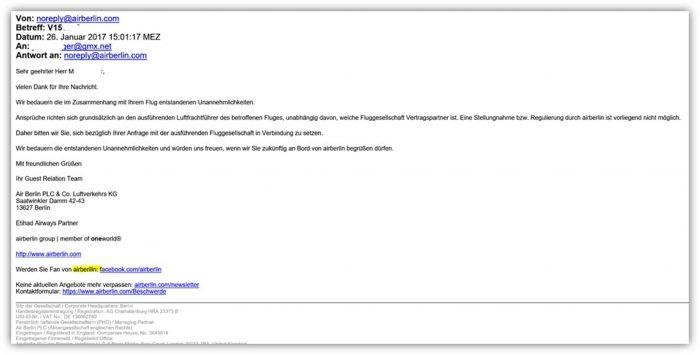 Air Berlin is telling the passenger that his downgrade was caused by Etihad and he has to approach them for regulation of the matter.

Again from the sounds and looks of it, I consider Etihad the responsible entity for this as well so our reader would have to approach Etihad Customer Relations in Germany (best send letter mail to their regional sales office) and putting them on notice to provide proof and an official statement about the situation.

In the end, I can very well see both airlines stonewalling and leaving the customer high and dry in which case he has two options:

Etihad unfortunately doesn’t participate in the ombudsman process (the participation isn’t mandatory and a range of airlines didn’t sign up) so the only way to get them to compensate the passenger fairly would be through legal action.

I have used the ombudsman successfully before and can say from experience that the airlines that don’t participate in that process (British Airways, Etihad, Thai Airways etc) are usually those with the worst customer service who try to weasel out of any potential claim, even if completely legitimate.

Personally, I’d have refused to fly Melbourne to Abu Dhabi in Economy Class had I paid for Business. Worst case I’d have asked them to charge me for an upgrade or a new ticket and claiming the money later through their customer relations department or in the worst case legal action as described above.

It’s hard to give any more specific advice in this matter other than requesting one more account of the situation from Etihad, and if the reply is negative (which I assume it will be) to then immediately initiate legal proceedings.

WSJ: “It’s Not You: Hotel Thermostats Really Are Rigged”

Airfare of the Day [Business Class] ETIHAD Singapore to Athens from $1,382 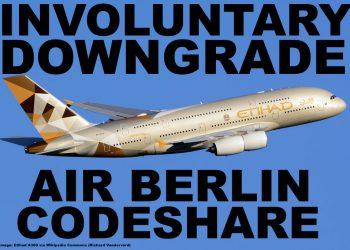