We received a Reader Question today asking what is the best strategy to collect miles on Low Fare Economy Class tickets that often earn little or no mileage credit. 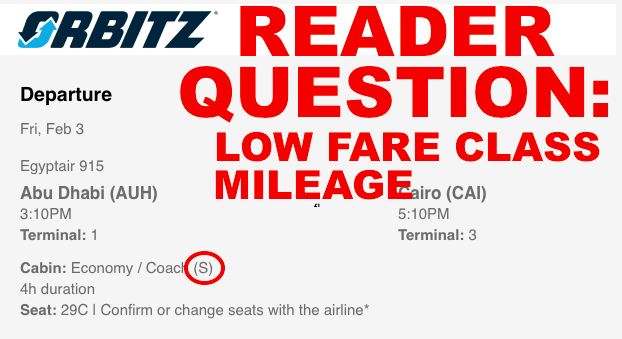 Sometimes certain tickets are just too cheap to pass up on and especially on the short- or medium haul flight, it’s hard to justify paying more for premium class if you can get a cheap fare on a mainline carrier, especially if it still offers you status benefits.

my question regarding cheap tickets: I’m Gold with Turkish Miles&Smiles and they don’t credit anything for cheap tickets of most Star Alliance partners such as Lufthansa, Singapore Airlines and many more.

Any idea if I should sign up for another program that offers better options to credit cheap fares to?

He certainly has a point because most frequent flyer programs nowadays have eliminated low booking classes, especially those of partner carriers, from their earning charts.

On occasion, the airline’s own program credits a small amount of points for such flights. For example, Singapore Airlines KrisFlyer program credits 10% of the base miles for their cheapest tickets just so they can say “Every SQ flights earns miles” but in reality this means that a flight from Tokyo to Los Angeles earns a whopping 500 miles.

To answer the reader’s question, there are programs out there that are more liberal in crediting low fares; let me use a couple examples I had personally in the past year.

Last week I booked a low fare class Egypt Air flight from Abu Dhabi to Cairo. Just over US$100 for the one way and booked in S class which wouldn’t earn anything on my main programs LH Miles&More, TK Miles&Smiles and SQ KrisFlyer.

However they do credit at a 25% ratio at United Mileage Plus where I had previous luck with crediting two Air India flights as well.

I usually use the website Where To Credit? (access here) that has a comprehensive and pretty much up to date database of accrual rates from all different programs.

Apart from United, where I have only Silver Premier Status as part of the Marriott-United Rewards Plus Partnership, a couple other Star Alliance programs showed favorable earning rates for this cheap Egyptair flight I booked. Those included Air Canada, Air China, Copa, Egyptair themselves, Ethiopian and SAS which all seem to earn with a 25% ratio. TAP Air Portugal would have even credited at a 50% rate.

Since I’m already a United member, I credited it there and was still able to benefit from my Star Alliance Gold status on the day of departure (Business Class Check-in, Fast Lane, Lounge).

I usually ask the check-in staff to change my number after I have checked in and never had a problem, except once when a United Agent wouldn’t let me into the lounge by simply presenting my SQ Gold Card. She insisted I add the Gold number to the reservation, not the non-status United number which I was using for a status challenge at the time. Don’t argue in these cases, tell them to just do it and then go to another counter and swap the number back.

The airlines put the screws on much tighter in recent years with the frequent flyer programs becoming more revenue-centric and no longer allowing full accrual on cheap Economy and even Business Class fares. There are plenty of Business Class booking classes that now only earn 100% Base Miles such as Lufthansa P/Z class.

As far as Star Alliance goes, I find that both United Mileage Plus and Air Canada Aeroplan have relatively fair accrual rates, and if you can get a little closer to your desired status even with such small credits, then that’s a very welcome opportunity.