Another crazy story brought to us from the good folks of United Airlines where a female pilot went on a crazy, emotional and political rant over the plane’s PA system causing passengers to reconsider their plans.

The lady was dressed in plain clothes and irritated the passengers so much that at least half the passengers decided to leave the flight as they considered the person unfit to pilot an aircraft.

To start this all off, why would a pilot in plain clothes be allowed to go on duty to begin with and which First Officer would be on board with this kind of behavior without shutting off the PA system, taking the colleague aside and straight out question why she doesn’t wear her uniform to work?

A flight out of Austin, Texas, was delayed after a pilot behaved in a way that caused passengers to believe she was mentally unstable, a United Airlines spokesman said Sunday.

The pilot, whom CNN is not naming, boarded the plane in street clothes and began speaking to passengers over the intercom, spokesman Charlie Hobart said.Passengers on Saturday’s San Francisco-bound flight took to social media to express concerns after the pilot spoke to them about her divorce and the presidential election, among other issues.

Some passengers said on social media that they got off the plane. Another pilot was brought in and the flight took off about two hours later, Hobart said.

Hobart said he didn’t have more details about the incident, including why the pilot was allowed on the plane in plain clothes and if anyone thought something was amiss before she boarded.

United will discuss the incident with the pilot, he said.

It’s a very sad issue aside from the obvious safety concerns as the lady obviously had plenty of personal problems that day and no other outlet other than sharing her feelings with the passengers around her.

The passengers reacted in different ways according to the CNN article, twitter messages and other personal accounts on social media. 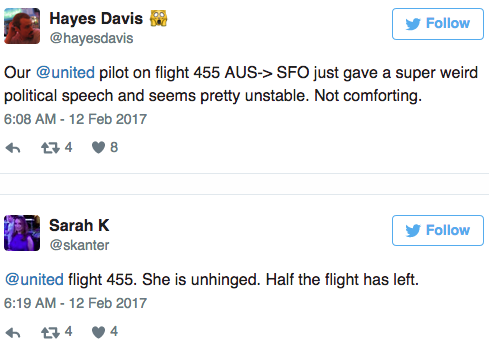 Obviously the situation scared passengers so much that they decided to get off the aircraft. None of the news articles so far identified if the lady was the captain or the first officer. Since a cockpit crew is a two person team that operated on a four eyes basis I personally find it incomprehensible how her colleague could let this get out of hand to this point and helped her out (shut her up) before she got herself into this situation.

In any case, the flight should have automatically been cancelled/delayed from an operational and safety perspective until a new pilot had been found which is what eventually happened after the passengers walked off.

As mentioned I think this is a rather sad case and instead of lambasting the pilot who obviously has emotional issues of sorts, let’s wish her well and hope she gets the treatment needed.

Let’s not forget the fate of the passengers and crew of the Germanwings flight who got killed because a mentally ill, suicidal co-pilot steered the plane into a mountain. Such things can end much worse than going out with a couple hours delay. Just one more reason why I don’t get the idle behavior of the second pilot on this flight.