ANA All Nippon Airways is testing a  futuristic and actually very practical way of helping maintenance workers with aircraft checks: Flying drones with cameras around the aircraft! 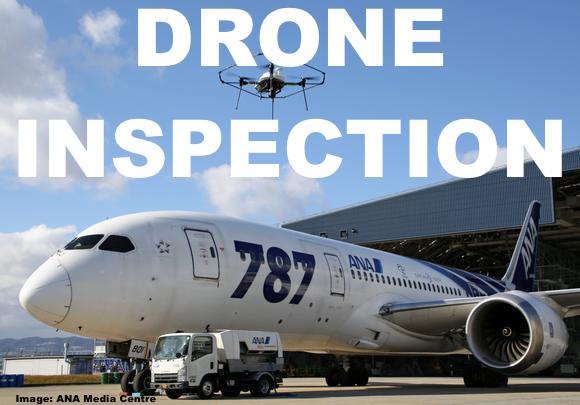 The drone is able to reach otherwise hard to access areas and surfaces of the plane without the maintenance crew having to climb over the structure or inspect it from above on a moving platform.

Using a drone will allow airlines to eliminate a good amount of hours that usually go into the inspection which is currently being tested to be substituted with the drone equipment.

The story can be found on Nikkei Asian Review today (access here).

All Nippon Airways flew a drone to check for damage on a passenger aircraft Tuesday, a new use of technology seen reducing flight delays.

The ANA Holdings unit conducted the experiment at Osaka International Airport in the afternoon. A drone carrying a camera ascended to about 16 meters above the ground and scanned a 57-meter-long Boeing 787 parked in front of a hanger. It flew in an automated mode at a speed of 1 meter per second while capturing images of the midsize jetliner from above, then landed after about 10 minutes.

Planes receive scratches and dents from lightning and other sources. Based on the severity and location of the damage, a decision is made whether to continue flying the plane or repair it.

Currently, maintenance staff conduct such inspections by visually checking for damage from an aerial work platform. This time-consuming process can cause flight delays or cancellations. With ANA adding new routes and increasing flights, mainly for international travel, the carrier seeks to raise efficiency.

The company will analyze the data captured by the drone to develop a faster inspection method. Yet several hurdles need to be cleared, including coordination with airplane builders in updating inspection and maintenance guidelines as well as regulatory changes to allow operations of drones, currently banned in and around airports.

The chief director of the ANA Digital Design Lab said the technology “is not ready for immediate application but it has great potential to improve efficiency and the safety of work processes.”

Great to see how much of a leap these drones have done. Nowadays they are in almost every area of life from random kinds flying them around to professional filmmakers, people who do Youtube videos and now aircraft maintenance. Amazon is also testing deliveries completed by drones.

The other side is one we often reported about in recent years as well when hobby drone fliers almost caused an accident with passenger air traffic. Multiple aircraft reported near collisions with drones that got in their flight path and they have a pretty wide range.

Great to see the Japanese going the innovation route again and try new things which is what Japan has been known for since forever.

I really would love to fly a drone as well but in the urban area where I am right now it’s illegal to use them even though I could *probably* get away with it.

Airfare of the Day: ANA PREMIUM ECONOMY New York (JFK) to Bangkok from $1,080

There is trouble brewing with the combined Air France-KLM due to the financing needed from their respective national governments. French and Dutch released their proposals...

Thailand Extends The Ban On Foreign Passenger Arrivals Until 31st May...