An American Airlines plane en route from Charlotte, NC to Gulfport, Mississipi struck a deer during takeoff yesterday afternoon and had to immediately dump fuel to return to the airport. 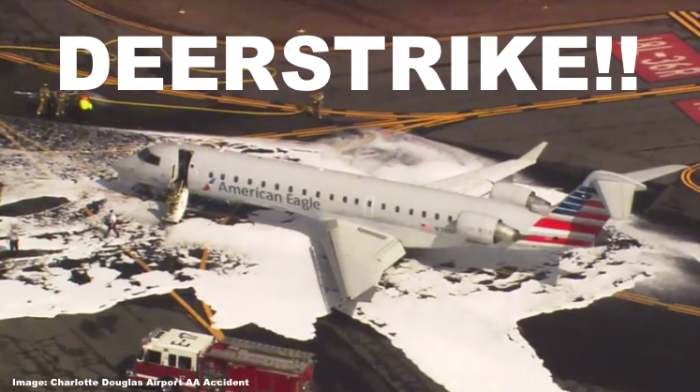 After the fuel dump procedure the aircraft landed safely and was met by emergency vehicles that laid out a large foam carpet to prevent any possible fire before the 44 passengers and crew exited the plane.

The entire procedure from take off, colliding with the animal and returning safely to the airport went pretty swift even though for the passengers on board it obviously seems much longer.

Federal Aviation Administration officials told Channel 9 that a plane struck a deer while on departure at Charlotte Douglas International Airport just before noon on Wednesday.

FAA officials said that an American Eagle CRJ 700 plane, operated by PSA Airlines returned to the airport after declaring an emergency after it apparently struck a deer while taking off.

Flight 5320, heading to Gulfport, Mississippi, hit the animal while taking off from runway 36 center around 11:45 a.m. From Chopper 9 Skyzoom, the plane could be seen trailing a vapor stream from the right wing as it circled back to land.

Passengers told Channel 9 once airborne, they made a pass over the airport so officials on the ground could visually check the damage. All the while, passengers heard calm assurances from the flight crew.

After it landed safely, emergency crews surrounded the plane. Officials said there was a fuel leak, and crews sprayed the plane with foam.

American Airlines said that all 44 passengers were evacuated from the plane and taken by bus back to the terminal. Nobody was injured. …

The runway was closed for several hours. Officials were able to tow the plane from the runway around 2 p.m.

American Airlines released the following statement regarding the incident:

“American Airlines flight 5320, operated by PSA Airlines, hit a deer upon takeoff from Charlotte Douglas International Airport at approximately noon. It was a CRJ-700 with 44 passengers and 4 crew on board headed to Gulfport, Mississippi (GPT). The airplane came immediately back to the airport and landed safely. There was fuel leaking from the aircraft, so passengers deplaned on the runway and fire trucks did hose the plane down. The passengers have been bused back to the terminal and will get a new aircraft.”

In some reports an eyewitness said there were several deers at the runway which raises doubts about the airports fencing and wildlife management which is in place at all airports to keep all sorts of intruders away from the run- and taxiways.

How did these animals get to roam the area so freely without being noticed and ultimately cause a collision that could have ended deadly?

Thankfully the crew was able to turn the plane around without any injuries and especially casualties resulting from this incident. Well, except the deer of course!

Charlotte Airport should seriously improve their fencing and step up the wildlife monitoring. When the U.S. Airways flight in LaGuardia suffered a bird strike of Canada Geese the airport authorities went ahead and euthanized thousands of larger birds within a year which however was not without controversy.