Back in late 2015 an incident made headlines when an Air Canada flight from Shanghai to Toronto hit some severe turbulence and had to make an emergency landing in Calgary after 21 people were injured.

It was immediately clear that none of the 21 injured were wearing their seat belts at the time turbulence hit and they were shaken around pretty violently.

The Transportation Safety Board has now released the final report with it’s findings in the matter blaming the injuries mostly on the fact that passengers ignored the instructions to wear their seat belts.

You can access the TSB Report here and it includes several graphics and images.

This is the entire report in PDF version:

Here are some key sections of the report.

As usual it doesn’t just go down as simple once you go into detail of such incidents and once you read deeper in the report it becomes apparent that passengers’ ignorance indeed played a big, if not THE major part in their own injuries.

At approximately 1850, or about 35 minutes before ACA088 entered the area of known moderate to severe turbulence, ACA088’s augment first officer called the in-charge flight attendant and said that they were approaching the jet stream, and that significant turbulence had been reported by the preceding aircraft, which was flying at a higher altitude. The augment first officer then directed the cabin crew to stop service and secure the cabin—actions that were in accordance with the Air Canada Flight Operations Manual.

The moderate to severe turbulence events featured a significant negative g force, followed quickly by a positive g force. The height of the ceiling of the Boeing 777 is 2.4 metres in the aisles and 1.6 metres at the window seat. Several passenger service units were damaged when passengers were thrown upward into the ceiling during the negative g event. The passenger who was seriously injured was seated near the L4 door (Appendix A) and was thrown upward and then downward onto the floor area by the door.

Most of the passengers who were physically injured were aware that they were required to wear their seat belts, but chose not to. Two of these passengers were asleep and did not hear the announcement.

Oops… I guess these passengers regretted that decision very quickly.

Here is a picture of a broken ceiling panel after a passenger smashed against it as described above: 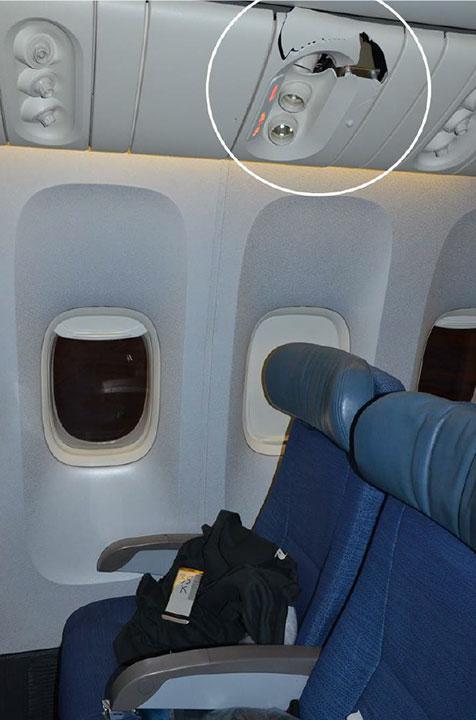 You can imagine what kind of force is needed to cause such substantial damage on a durable component such as this ceiling panel. The passenger in question is lucky that he’s still alive today.

Here is a seat map outlining all injuries that occurred during the incident:

Why do passengers ignore the announcements to use seat belts and other safety related advisory by the cabin crew? The report explains in detail the psychology and rationale that passengers apply in this matter which I found very fascinating.

In its guidance on turbulence management, the International Air Transport Association states that passengers tend to respond more to seat belt announcements when they are made by the flight crew, as opposed to the cabin crew.

Passengers’ attitudes and behaviours are strongly influenced by their ability to assess risk and their confidence in their own abilities to respond in an emergency. Once on board an aircraft, passengers are not provided with any specific information or education on the probability or effects of turbulence. And when the aircraft is in cruise flight, there is no immediate sensory feedback to indicate risk to the passenger, especially when the surrounding environment is dark and calm. …

I can’t say that I’m not guilty of also ignoring certain advise from cabin crew at times and yes, it plays into the same pattern as described here.

For some reason though I always feel more comfortable on board when I wear my seat belt as I’ve seen people being bumped around more than once including after landing when the aircraft hasn’t reached the gate yet and some folks think it’s a good idea to get up.

Turbulence can sometimes hit the aircraft unforeseen even though mostly the crew is able to give advanced warning to the passengers.

Some folks might feel they can assess the risk involved and think they don’t have to use the seat belts just like they probably also think it’s not necessary driving without seat belts in their own car or as a passenger in other cars such as taxis which I absolutely don’t get. I grew up in an environment where use of seat belts is absolutely mandatory and wouldn’t even think of it to get into a car without using it. I guess this attitude also transfers to when I sit down in a plane, I see the seat belt and automatically use it.

Use your seat belts when on board an aircraft, especially after being prompted to do so! Remember that it might not be just yourself who gets injured once you get catapulted around the cabin.