This weeks Whine Wednesday is about a service that I’m usually quite satisfied with: UBER and their pattern of letting drivers accept rides while they’re still having other passengers to drop off.

In certain cities even small distances can take plenty of time especially at rush hour traffic which means it can take a very long time for your UBER to actually arrive if the drivers still needs to drop off first.

I’m currently in Bangkok and everybody knows how bad the traffic is in the city which actually goes for most major cities in South East Asia.

Local taxis are the absolute worst so I’m trying to use UBER whenever possible and usually I’m really satisfied with the way it works but this (for Bangkok) relatively new feature that allows drivers to accept a new ride while they still have to drop off other passengers is costing a lot of time and is the source for frustration.

As the customer you don’t see that the driver still has a customer until the ride is actually confirmed and displays as En Route.

The other day I had to cancel 2 rides in a row because of this and another one because the driver was obviously heading into the wrong direction after he missed a turn. 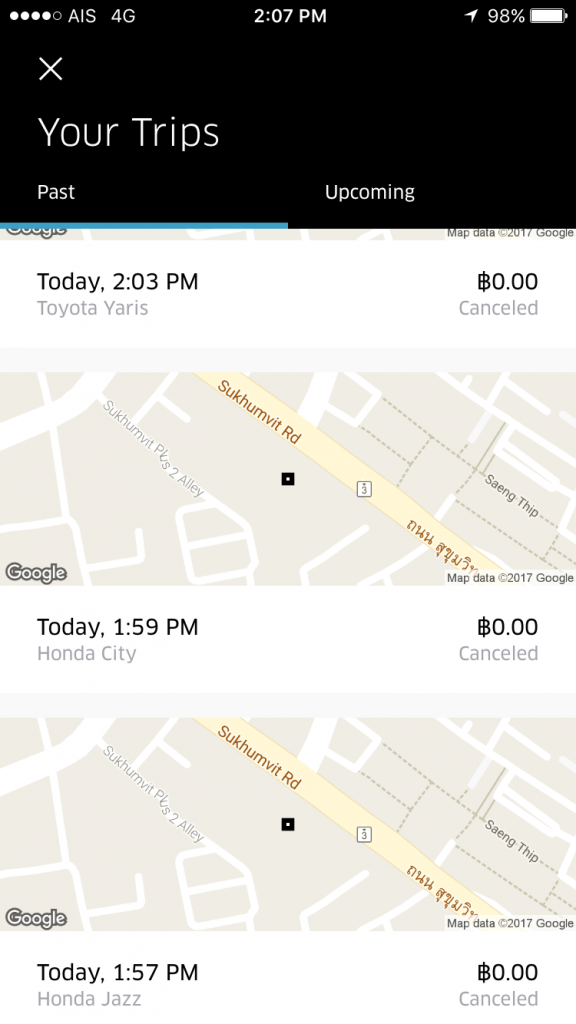 In the end I had to use Uber Black instead of Uber X since I already wasted more than 10 min messing around with the app and the 3 ride requests that ended in no result. It was more expensive but since I was a bit in a rush time was of the essence here.

Unfortunately it’s not possible to set preferences in your UBER app which includes not allowing drivers to accept your ride if they haven’t completed their trip yet or even “blacklist” certain drivers you had a bad experience with.

After sometimes waiting more than 20-30 minutes for not completed rides I always cancel such requests immediately, especially in a city such as Bangkok where I have a good feel for the traffic now.

UBER should really stop this practice of having “nearby” drivers accept your rides while still having other customers as it highly distorts the estimated arrival time for the customer, adding to the other frustrations such as having drivers who can’t properly operate the GPS or make mistakes while driving such as missing turns or other navigation issues.

Whine Wednesdays: Ridiculous Second Person Charges ($200 If Person Not With You When Checking In)