Someone at American Airlines thought it was a good idea to redesign some things, and so they went ahead and changed the boarding process, which is now broken down into ELEVEN groups. 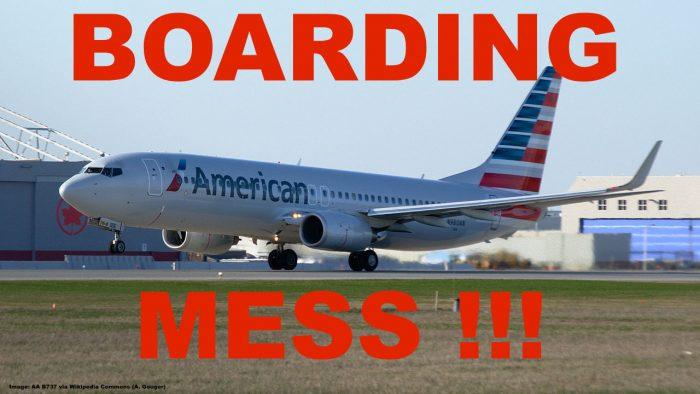 As anyone can imagine it didn’t take very long for passengers and ground staff to realize in what kind of a mess they’ve gotten themselves into with these new changes.

Boarding the aircraft is pretty much the choking process as far as passenger flow is concerned, and that is not only the case over at American but across all airlines worldwide with ground agents rarely being able to control the crowds once boarding is announced (Japan being the exception here).

Every now and then, someone at a particular airline re-thinks this whole procedure and tries to make boarding more efficient for all parties involved and so it happened that American Airlines once again rolled out a new boarding process which will come into effect on March 1st 2017.

We shut the door 10 minutes before departure, so be sure to be at your gate on time.

On March 1 we’re launching a new, simplified boarding process. The order will stay the same but group names may change.

Fair enough. You’d think that American would package it into a few boarding groups as previously handled and then roll it out. Well think again because what the airlines product managers came up with resulted in a total of NINE (9!!) boarding groups and is guaranteed to test the patience (and basic understanding) of both passengers and ground staff.

Here is how it’s being structured:

Basically, Pre-Boarding various types of Elite Members and Premium Class customers will be stretched out over 6 boarding groups, who will be eligible to board via the Priority boarding lane.

Another group of customers including Main Cabin Extra passengers and holders of certain AAdvantage Credit Cards will then be the first group to be able to board through the Main Boarding Lane, followed by boarding groups 6-9 with non-status customers who booked the new American Airlines Basic Economy boarding LAST.

In total you will have about eleven steps to follow here and if you think you’ve seen chaotic boarding before then hold your breath and await what will be happening from March 1st onward. Apart from having to make complicated announcements and sending passengers back who aren’t eligible to board yet, gate agents at the same time will still have to deal with standby and upgrade requests.

This won’t go down easy. Passengers (especially leisure travelers) aren’t used to such complicated processes and making people feel they’re being pushed further and further down the line as it inevitably happen with such a long boarding process will lead to frustration and tension. Especially if you pair it with flight delays and other customer service issues that are common occurrence when flying.

No doubt this was cooked up by some smart focus group and product managers who try to invent the wheel new every now and then but all it will accomplish is the intensify work for the gate agents and annoy customers. Of course part and cause of this ‘solution’ is that American starts to sell boarding privileges as a separate products and also assign them to credit card holders. Of course once you have to accommodate all of these different groups you end up with a mess like this.

Airfare of the Day [First Class] AMERICAN AIRLINES Chicago to San Francisco (or v.v.) from $178 OW