I’m going to stay a few nights in Doha next week and decided to go for a points redemption this time as the rates in Qatar are really quite high and found huge discrepancies between SPG & Marriott Rewards.

As we’ve covered multiple times already you can interchange both currencies in real time as well as match your status so you can always pick the best redemption value.

Doha, Qatar must have some of the most expensive hotel rates in the Middle East with almost all chain hotels hovering around US$200 a night at the moment which enticed me to look into a points redemption with either SPG or Marriott during this stay.

It’s well known that SPG has a horrible value for most Four Star and above hotels and so it came to no surprise that once again it made zero sense to redeem SPG points for this stay. 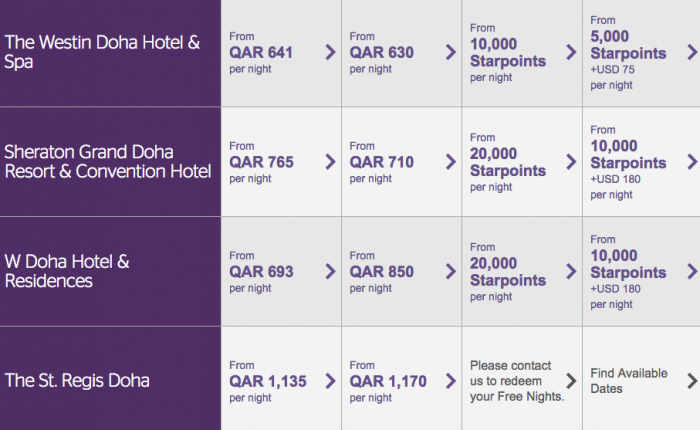 As you can see these redemption rates make no sense whatsoever. Especially the Sheraton and the W are horrible value. And what’s up with the cash and points? The paid rate is about the same as the cash portion of the Cash & Points plus an additional 10k points. Crazy!

It almost blew my mind that Marriott Rewards offers such great rates and even has a sale promotion  for the Marriott Marquis City Center. Only 10,000 MR (equals 3,333 SPG) for one night that has a tag price of ~$180 is fantastic value.

If you like it a bit more upscale then the Ritz Carlton can be a decent choice as well with 30k points per night. I don’t see though how I can justify spending three times as many points and receive less benefits than as a Platinum at a regular Marriott Hotel.

Now in all fair comparison I don’t want to exclude that the Marriott properties are run of the mill business hotels while the Westin or W are more leisure and resort style but this time I don’t really have to stay somewhere fancy.

The way that Marriott and SPG handle their merger leaves ample room for customers to take advantage of different pricing between the two chains. At least for the time being. I find that Marriott award charts are more reasonable even though I can see Marriott Rewards becoming leaner once the merger has completed sometime next year.

There are certain generous aspects to the Marriott Rewards program such as the very low awards for upscale properties as well as travel packages that might go away some time in the future. As far as SPG is concerned, apart from some key properties where redemption can make sense I think the best value is to transfer the points to airline miles.