Iceland has been on the press a lot lately partially due to WOW a low cost airline that offers cheap flights between North America and Europe plus offering a complimentary stopover in Reykjavik (you obviously pay for the hotel).

The hotel prices have crept up a lot in the Iceland in the past few years and due to the high prices (sometimes insane) it is usually good place to burn (SPG, Hilton & Club Carlson) points.

Bunch of friends decided to go to Iceland during the marathon there in August (some running) and the prices for the weekend are rather high.

There are Hilton (Hilton & Canopy), Club Carlson (two Radisson Blu) and SPG (two Design hotels) options available. I have stayed at the Hilton and both Radisson properties previously (Hilton three times) that all are unremarkable.

Decided to check the point prices for Friday to Wednesday:

Both Hilton properties had availability.

The paid rate for the five nights at the Hilton: 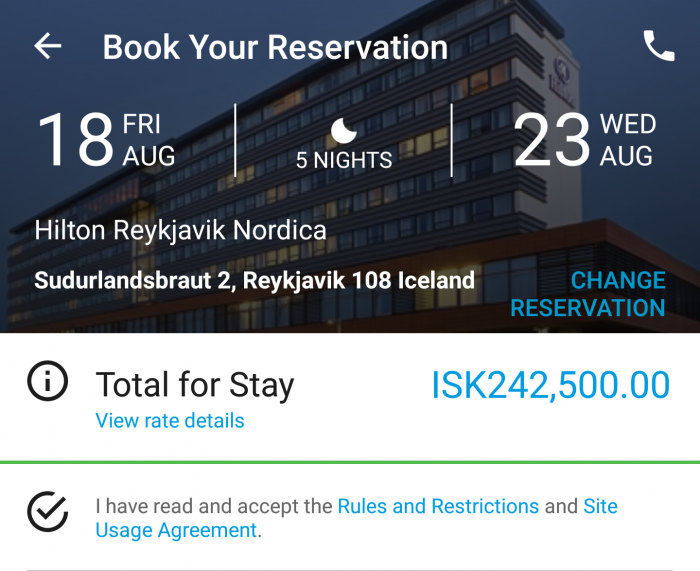 Someone would now argue that the value of the Hilton Honors points used for this award redemption is ($2,272/160,000) 1.42 cents each. That obviously not the case (at least not in my case) because I would never ever pay these rates.

The Radisson Blu has availability at 230 GBP per night for the weekend that would have been an acceptable choice. The prices for the Sunday, Monday and Tuesday nights are probably even lower.

This is just a reminder that points are usually best used when you turn out to be a location where the paid rates are throughout the roof due to an event and award availability still exists.

The availability is now gone at the Hilton (just booked this over the weekend) but it always pays to check daily in case of some cancel their reservations. Also, there is often availability at the very last minute when the hotel processes upgrades to elite members (as long as it is not sold out).