A couple weeks ago we wrote about a promotion by Diners Club and Leading Hotels of the World (LHW) offering a one year complimentary membership of the Leaders Club which has now been revoked.

Members who signed up under the promotion received emails from LHW saying that they were “not a legitimate recipient of the offer and accessed it through unintended means”.

I don’t want to whine about this because it’s not a real loss and let’s be honest it was pretty obvious that this promotion was designed for Diners Club cardholders (see our article here).

Nevertheless I can’t see why they wouldn’t just let this slide because what real damage can be done by the people who got in under this offer? In the least they would spend a few nights at LHW Hotels which otherwise likely wouldn’t have been considered.

Here is the email that was sent out:

It has come to our attention that you recently obtained a membership in our Leaders Club program through an offer that was intended for a special population. As you were not a legitimate recipient of this offer and accessed it through unintended means, your Leaders Club membership has been terminated as of 01 March 2017. If you believe you received this message in error, please contact us at theleaders@lhw.com.

Fair enough, but I think they should have coordinated this promotion properly with Diners Club to make sure signups can only run through a personalized link or the Diners Club Concierge.

American Express for example offers multiple Elite Membership Level with partners but the signup for those has to run through the Amex online account or by calling the concierge.

If you’re a legitimate Diners Club cardholder you might want to email them to verify that and keep your status active.

No loss here in my opinion. There are some nice properties that run under the LHW flag and those could have profited from having these members consider staying there thanks to this promotion. Both sides can live very well without each other though.

It was careless of Leaders Club Marketing to run this campaign with a simple, universal sign-up code in the digital age where things like these spread like wildfire on the internet. Play with fire, get burned – simple as that.

Leading Hotels of the World (LHW) is a collection of 400+ luxury hotels worldwide that are loosely affiliated with the...

Leading Hotels of The World (LHW) has launched an offer that allows Leaders Club members to earn double points for... 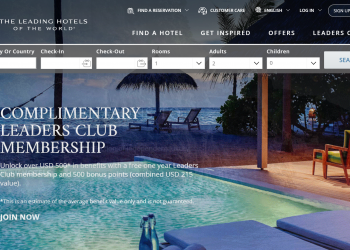 A LoyaltyLobby reader alerted us to The Leading Hotels of the World (LHW) website offering a free Leaders Club membership...